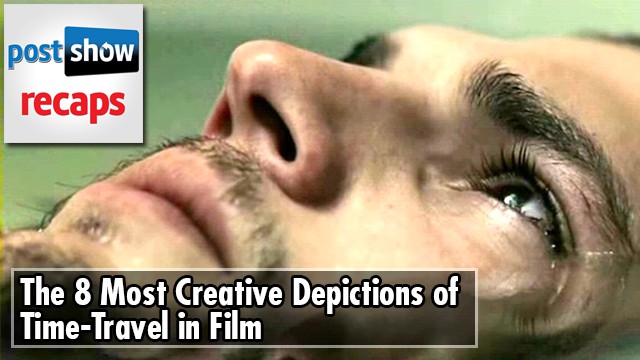 Time-travel has been used countless of times as a plot device in films. I set out to discover which films had the most original, unconventional and unique portrayals of travel through time.

This list is not necessarily of the best time-travel movies. I believe we can all agree that the Back To The Future movies are the indisputable champions of the genre. Instead, these films represent the top creative stories involving time-travel.

Evan (played by an Ashton Kutcher desperate to prove he can be a serious actor too) has the ability to relive key moments of his past. As he time-travels into the mind of his younger self, any of Evan’s actions has the potential to completely alter his present reality.

The crazy changes in Evan’s timeline taught me how, even the smallest changes in the past, can have catastrophic consequences in the present. The Butterfly Effect was the film that made me hesitate even before sneezing, just in case that would trigger a chain of events that would lead to me being chased by a vicious pack of wild dogs.

The film takes the risks of travelling in time to the next level. Scratching your nose one too many times while visiting the past may result in humanity having to live underground due to the nuclear holocaust YOU caused through your time-travelling recklessness.  You just had to get rid of that itch, didn’t you?

Gil is a present-day writer who one night literally wanders into 1920s Paris. Here he mingles with and befriends a number of historical figures, including Ernest Hemingway and F. Scott Fitzgerald.

What makes this film so unique is that its time-travel premise seems to blend into the background. Instead of dwelling on the implications and possibilities of time-travel, Midnight In Paris focuses on the relationships between its characters. This offers us a funny and refreshing take on the genre.

Most importantly, the movie points out the way in which people are always discontent with the present; yearning instead for a “golden age” in the past. It teaches us that our romanticized conceptions do not always align with the reality of the time in question.

So next time you find yourself longing for “a simpler time” remember that they probably didn’t have the Internet, or proper medical treatment back then. But feel free to continue with your misguided nostalgia. I am sure you would rather make your business in a hole in the ground than in the comfort of a sanitary modern toilet.

As if the universe of the Harry Potter films was not already absolutely awesome, this installation in the series introduces time travel into the magical world of the films.

With the soul of Harry’s godfather at risk, the ever-so-wise Dumbledore suggests that Hermione uses her “time-turner” to go back in time in order to ensure that things end well for everyone.  Harry and Hermione then overlap with their past selves, working behind the scenes so everything goes according to plan.

Why would the government issue the power of time-travel to a thirteen year-old, or why would the protagonists never again use the device is beyond me. It’s not like they could have prevented, I don’t know, the war that claimed so many of their friends’ lives.

In what is probably the only time Keanu Reeves has not totally resembled a living mannequin, Bill & Ted’s Excellent Adventure tells the tale of two clueless metalheads who travel to various points in history in a phone booth.

It is imperative that Bill and Ted pass their history class, and they hope that visiting different historical figures will help them learn enough to avoid failing the subject. It is one of the most original uses of time-travel ever portrayed in film.

Despite its dim-witted humor, I remember this movie actually teaching me a lot about history – even if it did caused me to grow up mispronouncing the name “Freud”.

Who wouldn’t want to travel through time with their best friend and some of history’s wackiest “personages of historical significance”? In a perfect world, that is how all time-travelling adventures would be like.

Outside the Back To The Future films, this might be the purest time-travel movie ever made. Don’t believe me? Give Bill & Ted’s Excellent Adventure a watch. And remember to always “be excellent to each other”.

Okay, time-travel had been used to assassinate people before (I’m looking at you Arnold), but the complex and highly paradoxical premise of Looper sets it apart from other films in the genre.

Looper is a mind-bending, brain-melting, trauma-inducing time travelling tale. And even though you spend most of the time reminding yourself that Bruce Willis and Joseph Gordon-Levitt are the same person, the film is one of the most creative portrayals of time-travel out there.

In Frequency, a son and father communicate through time using a radio whose signals are transmitted via temporal displacement caused by the aurora borealis – or something sciency like that.

After preventing his father’s death, John’s finds his present timeline completely changed. Now, not only is his dad dead, but his mom is too. Using the radio, John relays information to the past hoping that he and his dad can set things right once and for all.

In doing so, John creates several alternate universes, until he finally lands on one he is happy with.

John’s power to alter reality is highly understated. At one point, he ensures that his best friend will grow up to be insanely rich by telling his younger version to remember the word “Yahoo”.

I understand John knows that it is risky to meddle with the past, but couldn’t he have given his old man the numbers for the lottery, at least once? A wasted opportunity, if you ask me.

Cheesy as it may be, The Time Traveller’s Wife is unique in its approach to time-travel. In the film, Henry has a “genetic disorder” that makes him jump through time at random. It is highly unusual for a movie to treat time-travel as a condition, rather than an ability.

Henry’s “disease” constantly gets in the way of his relationship with his wife, as he is unable to control the timing and destination of his displacements through time.

The dark side of this kind of time-travel becomes apparent when Henry’s wife points out the fact that they have never seen an old version of him – suggesting that he will have died young. It is logical to assume that, if you keep getting displaced through time at random, it is likely that at some point you are going to land in a situation that endangers your life.

A romantic film itself, The Time Traveller’s Wife, strips time-travel of its usual romanticized portrayal; depicting it as a nuisance more than an exciting prospect. That alone makes this film a worthwhile watch – well that and Eric Bana’s naked butt.

As you can imagine, the situation initially drives Phil mad. After several unsuccessful suicide attempts, Phil decides to use his unusual circumstance to his advantage. He uses the opportunity to master a number of impressing skills, such as playing the piano and speaking French.

This is what makes Groundhog Day so great. It takes a unique use of time-travel to pose interesting questions. What would you set out to accomplish if none of your actions could have negative consequences? What would you dare if you knew you could never die? Essentially, what would you do with all the time in the world?

Personally, I would probably watch television for the most part. But that’s just me.

There it is. Let me know if you agree with the list, or if you feel like I’ve missed a film that also depicts time-travel in a creative way. Thanks for reading!