Rob Cesternino and Josh Wigler review 24: Live Another Day, Episode 10.  Josh is just so happy with this episode.   The worst it is for Jack Bauer, the better it is for Josh.  He thinks this is the best episode of the season by far and he is just so excited about how the season will close.

It seems that everyone is getting together trying to screw over Jack Bauer.  Josh thinks it’s the perfect collision of almost all of the crazy forces of 24 in one spot.

The return of Cheng Zhi was actually off their radar but it is a very good twist.  Adrian Cross turned out to be not that diabolic after all.  Josh explains where we left things off with Cheng who first appeared at the end of Season 4.  The last that was seen of him was in Season 6 when he was captured.  Cheng is perhaps Jack’s mortal enemy.

Adrian Cross is dead.  Rob thinks Adrian bit off more than he could chew.  Josh says he regrets nothing and is satisfied.  Steve Navarro is apprehended and in CIA custody.  Mark Boudreau calls in the Russians who then sneak-attacked Jack Bauer.  Josh says he’s more of like Boo-dreau and such a jerk, just as he was starting to be Jack’s Beau-bro.

The episode starts with chasing Navarro about the override device.  Josh was initially worried that Chloe was drinking the Cross tea and getting on board with his plan.  Josh thinks that Adrian bringing up Morris and Prescott has a reason and that something is gonna be revealed.

Navarro did a lot of things trying to cover up his butt and Josh thinks that it was a good move for him to carry a weapon especially when it’s Jack chasing you.  Josh says Steve may just be the most hated person on 24.

Rob would have sympathized with Mark had he not contacted the Russians. Everybody has turned around on Jack except Mark.

They’re setting up everything with Navarro and the hosts are hyped that Jack is going to torture somebody for the first time in Live Another Day.  Josh says this is awesome being the full circle moment from the start of the season where the tables have turned and the situation is completely reversed.

Navarro is negotiating with Jack and seems he’s had enough.  Rob thinks it’s probably the best single moment of the episode as far as the action goes when Navarro asked for full immunity and Jack just goes to town on Steve’s hand.  Josh agrees with Rob saying it was a Jack Bauer moment.

Rob says that of all reasons that Jack has to be double-crossed, this is perhaps the dumbest thing that he’s in a love triangle.  Mark realizes the entire free world is depending on Jack Bauer and he just told the Russians how to stop it.  The hosts certainly think Mark messed things up here.

Kate Morgan’s stunt is awesome and is rising the ranks among Josh’s favorite characters in 24.  There was no deal between Jack and Steve so the death penalty is back on the table and this would make one great episode.

Josh recalls the events that explains why Jack was on the run and which cost him the past four years of his life.  Rob is wondering how Jack got away with the firefight with like 15 Russians.  Josh says Jack always gets away.

Josh thinks the “Cheng twist” may have to be the final boss. The show is just twisting and turning like crazy right now.

Josh thinks 24:Live Another Day has gotten off to an incredible start with its 2-hour premiere.  And the past 3-4 episodes are just as strong as 24 has been since Season 5.  This season started to go crazy in a good way when Navarro was outed as the mole and the drone was attacking the hospital and since then, it’s just been amazing.

Josh thinks that to see Audrey with Jack and Cheng in a room would be an explosive potential for drama, considering Audrey’s history with Cheng in Season 6.  Both Rob and Josh think Jack would take bigger revenge against Cheng any day of the week. 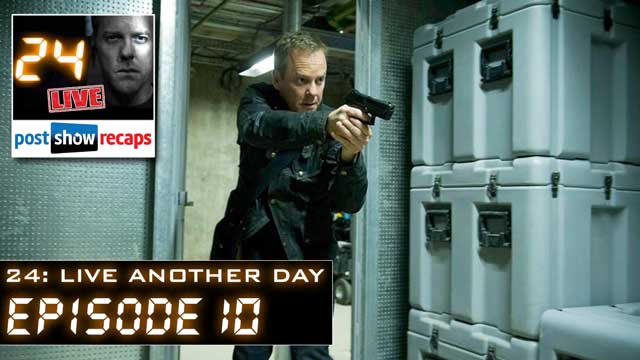