LIVE at 10:15 pm ET / 7:15 pm PT on Monday, June 2nd, Rob Cesternino and Josh Wigler review 24 Live Another Day, Episode 6. Join us LIVE after the show to ask your questions about tonight’s show.

In this episode Rob and Josh discuss the following questions and much more:

Join us for a fun filled chat about the latest episode of the show and come back LIVE next Monday night at 10:15 pm ET for the next edition of 24 LIVE. 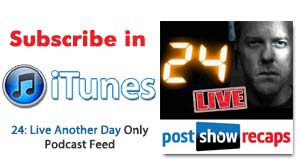