LIVE on the morning after the return of Jack Bauer, Rob Cesternino and Josh Wigler recap the premiere of 24: LIVE another Day.

In this episode Rob and Josh discuss the premiere of 24 and discuss the following topics:

Rob and Josh Review the Premiere of 24 Live Another Day

Jack Bauer is Back

Return of Chloe O’Brian to 24

Attack of the Drones: The Villains of 24 Live Another Day

Subscribe to our 24 Podcast on iTunes – Get the 24 Podcast in the iTunes Store.  Your reviews and star ratings are greatly appreciated.

Be sure to join Rob and Josh on Monday, May 12 for the next LIVE edition of our 24: Live Another Day Podcast.

The 24 Best & Worst CTU Agents of All-Time: Josh counts down the best and worst that CTU has given us for Parade.com 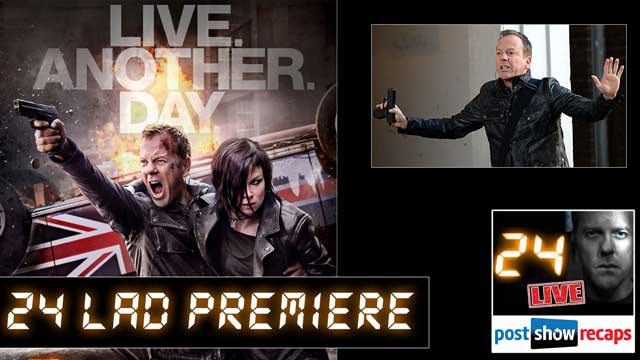 24 Recap: Review of the Premiere of 24 LIVE ANOTHER DAY