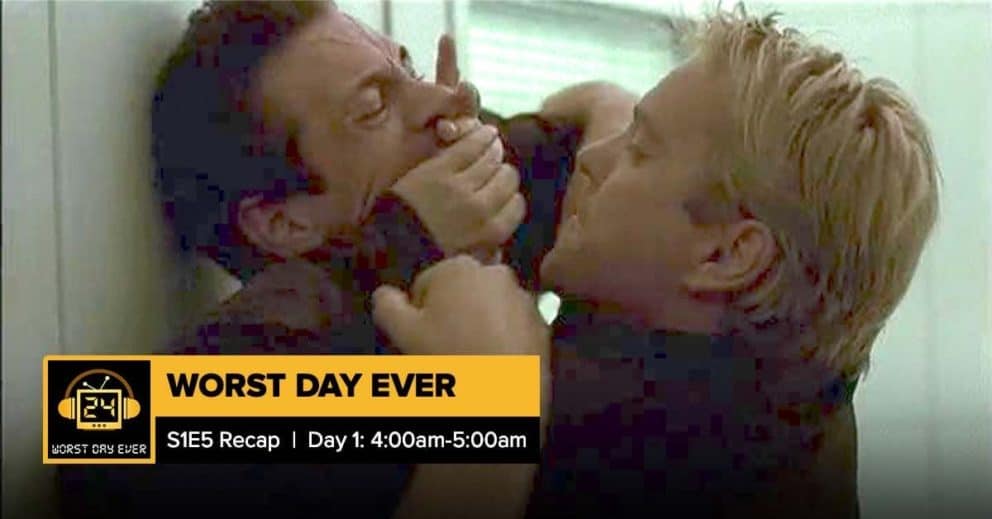 Tick-tock! Check the clock: it’s time for Post Show Recaps to embark on a Jack Bauer podcast adventure! This is “Worst Day Ever,” a very stressful recap of the very stressful first season of “24.” Hosts Josh Wigler and Emily Fox are recapping every episode of “24” Season 1, without spoilers for folks who have never seen the show before (including Emily!), with only 24 minutes to cover any given episode.
First premiering in 2001, “24” centers on Counter Terrorist Unit agent Jack Bauer, played by Kiefer Sutherland, as he embarks on the worst day of his life. Terrorists are conspiring to assassinate presidential candidate David Palmer, Jack’s family is in danger, and folks he works with may be involved in both plots. Each episode takes place across this very bad day, with events occurring in real-time. For now, “Worst Day Ever” only plans to cover season one of “24.”
This week, Josh and Emily recap Season 1 Episode 5. Josh and Emily will stop down for a longer feedback episode in Episode 8, so send your thoughts by then to [email protected].
Throughout the season, Josh will post bonus “24” content for patrons of Post Show Recaps. You can get all of that and more when you sign up at patreon.com/postshowrecaps.
Spend more time listening to 24 Coverage:
24 Season 1 Episode 4 Recap + Feedback | Worst Day Ever
24 Season 1 Episode 3 Recap | Worst Day Ever
24 Season 1 Episode 2 Recap | Worst Day Ever
24 Season 1 Preview + Episode 1 Recap | Worst Day Ever
Subscribe to
PostShowRecaps.com