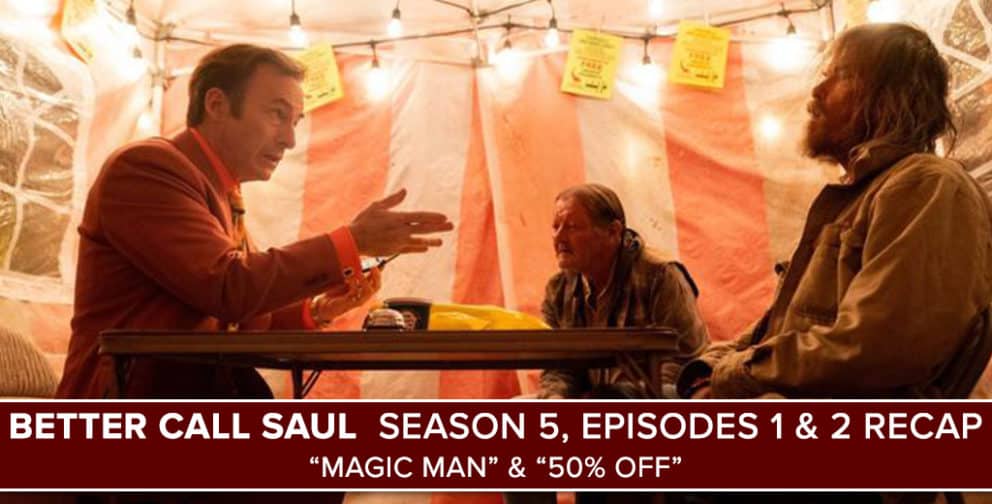 Josh Wigler, Antonio Mazzaro, and Rob Cesternino are back to recap season 5, episodes 1 & 2 of AMC’s Better Call Saul, entitled “Magic Man” (episode 1) and “50% Off” (episode 2). The story of episode 1 was written by Peter Gould and was directed by Bronwen Hughes, and first aired on Sunday, February 23, 2020. The story of episode 2 was written by Alison Tatlock and was directed by Norberto Barba, and first aired on Monday, February 24, 2020.

According to AMC’s description, episode 1 was about: “Now doing business as Saul Goodman, Jimmy unveils an unorthodox strategy for client development that tests Kim’s tolerance of his new legal persona. Lalo searches for the mysterious Michael, only to discover a problem within his own operation.”

Episode 2 was about: “Jimmy’s promotional stunt has unintended consequences. Nacho takes extreme measures to earn Lalo’s trust. Saul is a success at the courthouse, but still has yet to win Kim over. Simmering with rage and self-loathing, Mike loses his temper.”