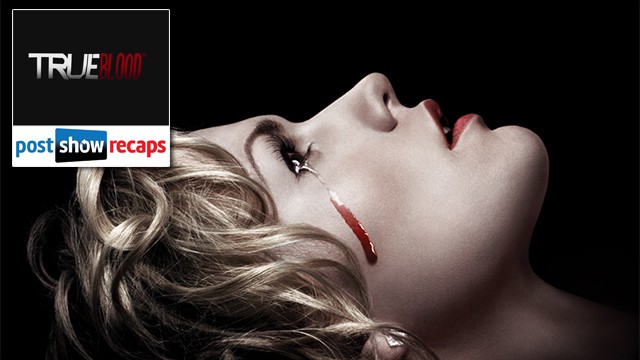 I know I shouldn’t love True Blood. The show peaked long ago – almost undeniably in its first season – and has since descended into pure camp. And yet, I seem to anticipate its return more than any other show, barring perhaps Game of Thrones and The Walking Dead.
A little bit about my history with the show: I was skeptical to start watching it having been a lifelong Buffy superfan. I marathoned the entire first season in one day (ah, the good ol’ college days) and since then, I’ve inexplicably looked forward to every single episode. When the show refuses to take itself too seriously (like last season’s fantastic death-by-stiletto), it is one of the most riotous and enjoyable TV shows I watch. But then, it can sometimes just literally be the worst. I could write a thousand words about all of the ways Alan Ball and the other writers kinda sorta ruined True Blood, what with the were-panthers and the vampire fairies and Luna and ugh I just threw up thinking about Luna again.
But the truth is, I’m a sucker for this show. I’m invested in most of the characters (well like 20 out of the 65 or so) and I think that as an allegory for LGBT rights, it has always had an interesting premise lost in all of the extraneous details. I’m interested to see how the writers take this show – which once sat upon HBO’s ratings equivalent of the iron throne – and finish it off. And more than anything, I’m thrilled to get to write about my love-hate relationship with a show that I once thought was the most exciting show on television. Each week, I’ll be recapping the highs and lows of the episode we’ve just devoured (crappy pun intended) in my own “Yay-Meh-Ugh” power rankings system.
Before we talk about the premiere, let’s start off by briefly reminding ourselves how we last left off Sookie, her “stupid precious fairy vagina” and the rest of our Bon Temps crew.
True Blood became infected with Hep V, which turned vampires into zombie-ish creatures (it was only a matter of time before HBO jumped on the zombie train). Bill and Sam, recent vampire celebrity and new town mayor respectively, hatched a plan that would pair up humans and vampires, trading blood for safety. And while Tara took her mom’s offer to pair up, Sookie turned down a similar invitation from Bill, seemingly happy with her were-boyfriend Alcide.
And while our characters enjoyed a vamp-human mixer at the newly renamed Bellefleur’s (formerly Merlotte’s), a group of Hep V infected vamps approached them. Gulp.

1. That opening scene. Wow. This was a direct continuation from last year, with the Hep V vampires showing up to make chaos of the town BBQ. The vamps start killing everyone and anyone. They make off with Arlene (oh no!), Holly (meh) and Nicole (YES!!!!!).
The speed of the sequence is really great and reminds us of how dangerous vampires can be when they’re not having head-turning sex with humans or professing their undying love for Sookie. And the mess they leave behind is… um, gross. Lots of bodies, lots of that red goop stuff that somehow symbolizes a vampire is dead. The anatomy of vampires is confusing.
The scene ends with the night’s real shocker: Tara died (again?) protecting Lettie Mae from a Hep V-ampire. I don’t think an opening scene has killed a character so mercilessly since (** 10 YEAR OLD SPOILER ALERT!! **) David Palmer in 24’s fifth season.
For as happy as I would have been to see Tara die for real a few seasons ago, this really seems like a missed opportunity to play with the great Tara/Lettie Mae dynamic. And it’s kinda random that Willa, Jason and Jessica are the only characters that care (Lafayette? Pam? Sam? Sookie?). Nobody seems too hung up about it.
But hey, True Blood marches to the beat of its own drum, so I’ll go along with it and just assume it’ll have consequences on episodes beyond this one. Countdown to my eventual letdown begins now.
The fallout with Lettie Mae (worst V trip ever?) is fun and gives Willa something to do for all of thirty seconds. She cries on Reverend Daniels’ shoulder for a minute, whining about Eric being gone, Tara being dead, and having nothing to do. And really, given how little I care about her storyline, I’d like to just give her my Netflix password and let her catch-up on Orange is the New Black.
2. Pam’s game of Russian roulette is charming. Pam’s opponent, a religious vampire, gives her a few philosophical points to ponder. He urges her to find God, to which she deadpans: “Your god and my god can have a circle jerk for all I care. I’ll be in hell, having a three-way with the devil.” Insta-classic.
Their verbal sparring continues, as they survive a few more pulls of the trigger.
“You’re dead,” Pam coldly snarls.
“No, I’m alive,” Mr. Allah-Loving Vampire responds as he pulls the trigger and instantly turns into a half-liter of red goop.
Guess he’s not so alive anymore. Is this irony? I try not to think too deeply during True Blood.
The scene ends by sending Pam off onto the next phase of her own personal “Where in the World is Eric Northman” game. And next week, Pam will have to visit the Rhône, a river that goes from Switzerland to France (thanks, Google!), where she might play hot potato with a grenade.

3. Last season, I loved the introduction of Violet as a dom vampire that took a liking to Jason. After the time jump, Jason had been performing daily oral sex on Violet, which makes him a far better boyfriend and human being than I could ever be.
Tonight, he finally got some… by yelling at her. She’s so impressed by his bravado that they decide to do it against a car in the middle of the night.
Great build-up, poor climax (hehe… self high-five).
4. McConaughey and Harrelson are going to be a tough act to follow for HBO, but I doubt that Andy and Bill have the chops to pull it off.
They sneak through the infected vampires’ nest, where they stumble on a bunch of dead bodies used for feeding. Andy pukes and I, after about half a bottle of wine, grip my stomach (seriously, try watching this show sober).
When Sam’s mayoral opponent and his gang of vamp-haters find Bill and Andy at the nest, Andy saves Bill. Aww, cute. Bill tries to thank him, but Andy’s just interested in staying as begrudging partners in crime. ‘Cuz that’ll last long.
Bill has a momentary flashback to leaving his family and going to war. Blah. If this show gives me scenes of Bill as a soldier, I’ll give them an automatic “Ugh” ranking. I watched every episode of TURN and I’m done with that shit.
5. I thought Sookie and Alcide would be the boring, but grown-up alternative to Bill’s endless “SOOKEH!” howls.
Within minutes, they’re fighting because Alcide thinks Sookie’s vampire-loving ways attract trouble. This upsets Sookie because… she doesn’t like the truth? I don’t really see why she gets upset. But she does! And so she walks home alone, fights with Alcide some more and then makes up with him. Grown-up? No. Boring? Yep.
Saved from ranking dead last in the power rankings by the gift that keeps on giving: Anna Paquin’s boobs.
6. Holly, Nicole and Arlene are being locked up in the basement of Fangtasia. A vampire who looks like Adam Levine kills a police officer right in front of them.
They scream. I yawn.
7. The show has never known what to do with Lafayette. They killed him at the end of season one and then undid it as fan service. They’ve tried everything: giving him powers, giving him a boyfriend, giving him the punch lines.
And none of it has worked.
Tonight’s scene with Lafayette and James (now played by Nathan Parsons, who competently steps in for Luke Grimes) was more of the same: background & inevitable showmance set-up.

8. Look, I love Jessica. I really do. But her chivalry is boring, not adorable.
And I can’t help but think her storyline with Adilyn is just another time-filler. I’ll reserve judgment for when I see more of where they’re going with this, but with only nine hours to go until this show is done forever, I don’t really care that much about Andy’s fairy daughter.
Bill’s scenes with Jessica are always surprisingly good. And Jessica with Jason was a pretty fun pairing. But Jessica as a martyr protector of Sheriff Bellefleur’s daughter? Leave it on the cutting room floor, thanks.
9. Sam’s vampire mixer didn’t go off as planned. So after returning to the bar (and getting caught shifting back into his human form by his former mayoral opponent), he does everyone the service of trying to send them home. “It’s not safe here,” he tells them, which is obvious to everyone because 50% of their town just got ripped apart by diseased vampires.
Ugh, Sam. So useless. Why do I tolerate you?!
10. “Morning is coming.”
No, that’s not HBO’s tagline for Season 5 of Game of Thrones. It’s Reverend Daniels summarizing that most of the humans survived the night.
I feel almost obligated to pitch HBO on “Ugly boobs are coming” as the tagline to Girls.
The church sets the scene for Sookie professing her love for the town after hearing for the billionth time that they all think she’s a vampire slut.
“For better or for worse, nobody in this town knows vampires better than me,” she declares, trying to reason with the residents of Bon Temps. Oh, I would have loved to hear what everyone was thinking when you said that, Sookie. Give them ammunition, why don’t you?
“I want to help,” she begs them before we cut to the credits.
Not a great cliffhanger, HBO. Sookie wanting to get involved in vampire shenanigans is about as surprising as… well, I think it’s the most obvious thing that can happen on True Blood so I’m lacking a good joke here. But anyway, it’s very unsurprising.
This scene ranks so low for its unintentional hilarity & overall uselessness. What does Sookie intend to do to protect the city of Bon Temps anyway: organize a bake sale?
_______________________________________________________________________
And there you have it. The final season of True Blood is officially on.
Overall, a pretty lackluster premiere that peaked about five minutes in and then never matched that level of intensity. But we’ve still got nine episodes left so not all hope is lost. Plus, even if the episodes aren’t great, the live snarking is always fun. Everyone needs to hate-watch something, right?
More importantly: what did you think of Tara’s quick death before the credits? Sad not to see Eric at all? Let us know in the comments!