Be sure to join us on Sunday, April 6th at 10:15 pm ET for our LIVE coverage of the Game of Thrones Season 4 premiere. 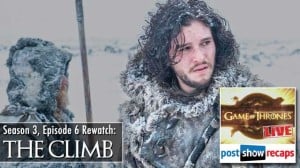