In this episode, Rob and Josh discuss:

Be sure to join us on Sunday, April 6th at 10:15 pm ET for our LIVE coverage of the Game of Thrones Season 4 premiere. 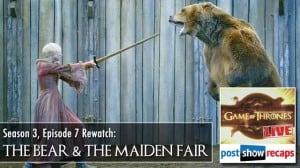 Game of thrones season 3 episode 7 recap: The Bear and The Maiden Fair