Join Rob Cesternino (@robcesternino) and Josh Wigler (@roundhoward) as they recap episode 2 of season 4 of Game of Thrones, The Lion and the Rose.  In this recap Rob and Josh discuss the major plot points of the episode which included: 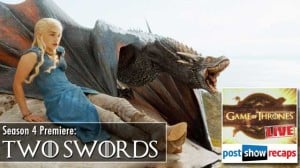