Rob Cesternino and Josh Wigler recap Game of Thrones Season 4, Episode 3 with a review of “Breaker of Chains”. Join us each Sunday Night LIVE after the episode for the chance to hear our recap and ask your questions LIVE on the show.

In this week’s recap, Rob and Josh discuss all of the fallout from King Joffrey’s death at the purple wedding including:

The Aftermath of the Purple Wedding:

After Cercei screams for Tyrion to be taken, Dantos, the Fool, grabs Sansa as Tywin screams that no one leaves the capital.  The fool takes Sansa off in a row boat to “someplace safe”.  The fool and Sansa get to a ship, Sansa climbs up the ladder and Littlefinger is on the boat.  Littlefinger has the fool murdered because he was a drunk and a fool.  Littlefinger reveals that he had the necklace made and promises Sansa that she is safe.

Tywin asks Tommen what kind of king he will be.  Tywin asks “What’s the most important trait for a King?” Tommen cycles through Holiness, Justice and Strength before finally guessing that WISDOM is what makes a good king.  Tywin explains that the wise king knows what he knows and listens to his counselors.  Tywin adds, “Your brother was not a wise king, your brother was not a good king”.
Once Tywin and Tommen leave, Jaime enters and requests to be alone with Cersei.  Cersei says that it was Tyrion who killed Joffrey.  Cersei remembers how Tyrion said, “The day will come when you think that you are happy and your joy will turn to ashes in your mouth”.  Cersei says Jaime needs to avenge him and kill Tyrion.  Cersei begs Jaime to kill him.  Instead of working on killing Tyrion, Jaime wants to makeout with Cersei over Joffrey’s body.  Jaime says “You’re a hateful woman”.  Jaime proceeds to rape Cersei next to Joffrey’s body.  Cersei says “It’s not right”.  Josh Wigler compares this scene to how this was portrayed in the books.

The Hound and Arya Stark:

The Hound and Arya are making their way to the Eyrie.  The pair are spotted as a farmer and posing as a soldier who fought for the Tully’s, they get invited over for dinner.  The farmer recruits the Hound in to taking a job and agrees to “Fair wages for fair work”.  However, the next day, the Hound beat up the farmer and took his silver. Arya is upset but the Hound says that this is how the world works.  He asks Arya, “How many starks do they have to behead before you figure it out?”

Sam at The Wall with Gilly

Back at Castle Black, Sam gets teased by the other Nights Watchmen about Gilly.  Sam talks with Gilly about her being called a “wilding”.  Sam seems to be getting jealous of all the other Night’s watchmen.  When Sam expresses his worry for Gilly, she says, “Thank you for worrying about me”.  Sam doesn’t know if Gilly is safe at the wall.

Stanis asks Davos to read the letter about the death of King Joffrey.  Stannis is upset because Joffrey is dead like Melisandra predicted and Gendry (Robert’s bastard) is gone because Davos helped him escape.  Stannis feels that he is running out of time and tells Davos he needs an army.
Davos spends time getting more reading lessons from Stannis’ daughter and has a stroke of inspiration.  Davos wants to write a letter to the “iron bank of Bravos” because he needs to get their attention.

Tyrion in the Dungeon gets visited by Pod

Pod smuggles several items to Tyrion.  Tyrion aks Pod if he thinks he killed King Joffrey. Tyrion finds out that Tywin, Mace Tyrell and Prince Oberyn of Dorne will be the judges in his trial.  Tyrion also learns that Sansa is gone.  Tyrion suspects that whoever did this wanted Tyrion to take the fall.  The trial is in a fort night.

Ygritte and the wildlings are on the warpath and killing everybody they see.  One of the Thenns grabs a small boy and tells him, “I’m going to eat your parents”.  He instructs the boy to tell the Crows at Castle Black.

After hearing about the news of the wildling attack, the Nights Watchmen debate their options,  They have just over 100 men and can’t afford to lose a single man.  When the Rangers return from Craster’s Keep they realize that the rogue Nights Watchmen could reveal their weaknesses.

Danaerys marches her forces on Meereen.  The Meereenese send a single champion to fight their single champion.  Daario accepts the challenge, refuses a horse.  Daario throws his sword in to the horses eye and beheads the guy.  Dani catapults chains in to the city to remind the slaves that they are free. 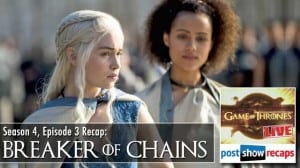