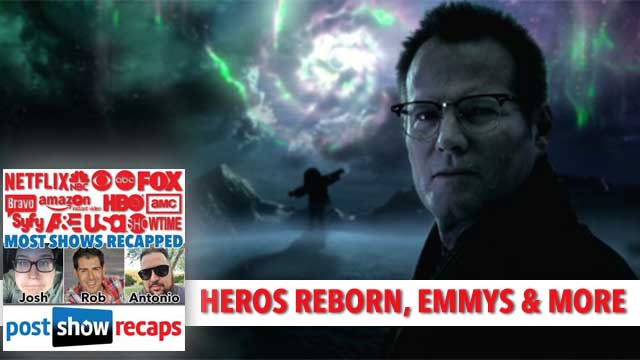 It’s as the name of the show suggests: Rob, Josh and Antonio are getting together every week to talk about most of the shows — starting with HEROES REBORN, the resurrected version of the NBC series about super-powered individuals living among humans. But the days of Peter Petrelli and Sylar are a thing of the past in the new version of the show, with new characters like the video game-dwelling Katana Girl and number one ice cream fan Tommy taking the main stage. The MSR hosts talk about the two-hour premiere, what’s working and what’s not, and what they remember from the first four seasons of the series.

Beyond Heroes, there’s talk about GAME OF THRONES sweeping the Emmys, plus some catching up on shows from the summer like MR. ROBOT and REVIEW, based on Antonio’s suggestion during last week’s unofficial episode. If you haven’t listened to that one, click here and do so!

Let us know your take on HEROES and everything else by hitting us up on Twitter, in the comments section below or on our feedback form.