Rob Cesternino and Zach Brooks host HOUSE OF CARDS LIVE and discuss the premiere of Season 2 of the Netflix Original Series. Join in the fun as we talk about all the House Of Cards Season 2, Episode 1.

THIS POST WILL NOT INCLUDE ANY SPOILERS PAST SEASON 2, EPISODE 1 of House of Cards

On this episode, Rob and Zach will discuss: 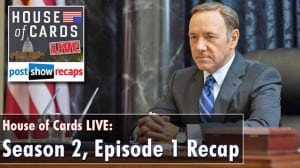 Frank Underwood is Back!