With season 2 of House of Cards set to be released this Friday, February 14th, Rob Cesternino and Zach Brooks get together to recap all of Season One of House of Cards.  In this special edition of HOUSE OF CARDS LIVE, Rob and Zach recap season one by answering 20 questions about the series.

Be sure to join us LIVE for 13 days in a row at 7 pm ET / 4 pm PT starting on Friday, Feb 14th for our daily coverage of House of Cards Season Two.

20 Questions About House of Cards, Season One:

1.  Would House of Cards have been a better show if it were on traditional TV instead of Netflix?

2.  Are we rooting for Frank Underwood?

3.  How much do you buy how pre-planned Frank Underwood’s tactics were to rise to the Vice Presidency by taking out Pete Russo.

4.  How plausible was it that Francis Underwood killed Pete Russo himself?  How come nobody thought this was suspicious?

5.  Thumbs up or Thumbs down on the Claire Underwood storylines?

6.  Do we like it when Frank Underwood (Kevin Spacey) breaks the fourth wall to talk to the audience?

7.  Do we buy the career arc of Zoe Barnes as it happens in House of Cards season one?

8.  Were there any romantic feelings from either side during the affair between Zoe Barnes and Frank Underwood?

9.  Would Pete Russo have been a good governor for the state of Pennsylvania?

10.  Does Jillian have a case against Claire in her lawsuit for wrongful termination?

11.  Was Pete Russo’s drunk interview on the radio station the “Red Wedding” of House of Cards season one?

12.  Did Frank Underwood have a gay relationship with his college friend?

15.  Which character do you want to see more of in Season 2?

16.  Where do we think that the storyline is going during Season 2 of House of Cards?

17.  Is there any significance to the season being released on Netflix on Valentines day?

18.  Will we see more about Pete Russo’s friend from Pennsylvania in the next season?  Is he headed to Congress?

19.  What was Frank Underwood’s greatest moment in season one of House of Cards?

20.  What are Rob and Zach’s one bold prediction for Season Two of the House of Cards? 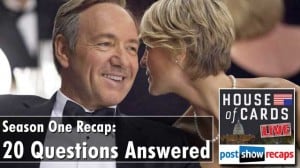