Rob Cesternino and Zach Brooks recap House of Cards Season 2, Episode 2. Join us live to talk about everything that went down in Chapter 15 of the Netflix Original series, House of Cards.

PLEASE NOTE: We will NOT be talking about anything beyond Episode 2 of Season 2 of House of Cards

On this episode, Rob and Zach discuss the following and much more: 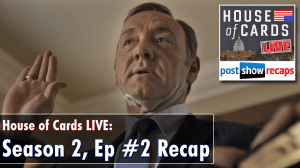