Join Rob and Zach Brooks to discuss Season 2, Episode 3 of House of Cards. Join us to ask your questions about Chapter 16 of the Netflix original series.

PLEASE NOTE:  There will be nothing discusses in this recap past House of Cards Season 2, Episode 3.  Please refrain from posting any spoilers beyond this point in the show.

On this episode, Rob and Zach discuss the following and much more: 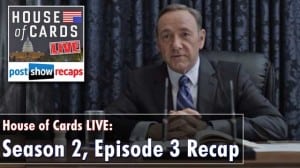