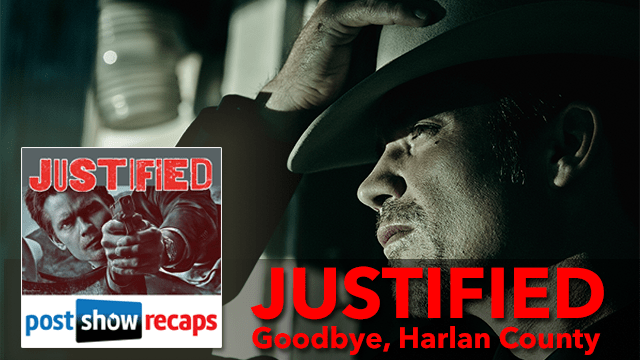 They say you’ll never leave Harlan alive, but hopefully you have better luck with the final episode of the JUSTIFIED podcast!

Josh Wigler (@roundhoward) and Antonio Mazzaro (@acmazzaro) close the book on their coverage of JUSTIFIED, engaging in a wide-ranging discussion about the series finale, the final season, and the show’s place in the pantheon of great TV dramas. Josh and Antonio field questions from the listeners as they reflect on what made JUSTIFIED so special, and why they’re sad — but fulfilled — now that it’s all over.

As for what’s next? Well, let us know! Josh and Antonio will be covering THE LEFTOVERS when it returns for season two, but they’re wide open to suggestions for their next podcast series. Reach out to them on Twitter, in the comments below, or through our feedback form.

Thanks to everyone who listened along to the JUSTIFIED podcasts over the last several months. It’s time to say goodbye to Harlan County, but we’ll see you again in Upstate New York.