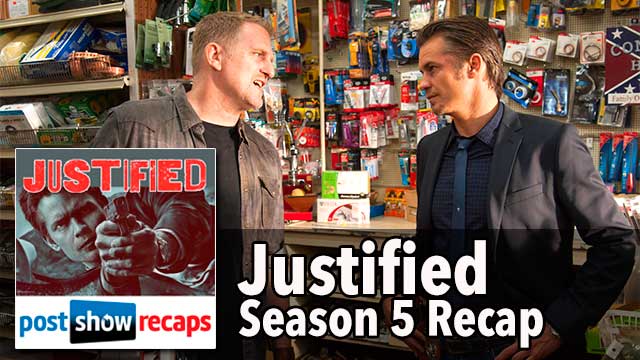 Are you within 21 feet of this podcast? Good! Just watch out for holes.

Josh Wigler (@roundhoward) and Antonio Mazzaro (@acmazzaro) get together once again to discuss JUSTIFIED, the FX drama about Deputy U.S. Marshal Raylan Givens and his exploits through his Kentucky hometown of Harlan County. This time, Josh and Antonio are talking about season five, which sees professional doofus Dewey Crowe’s family moving into Harlan to cause all kinds of mischief. Meanwhile, Boyd and Ava Crowder’s relationship fractures due to a multitude of issues, including his failing business enterprises and her perilous prison sentence. Through it all, Raylan’s weaving in and out of the picture as he embarks on a new relationship, butts heads with his boss, and deals with some new daddy issues of his own.

Season five of JUSTIFIED is considered by many fans to be the weakest season but does it deserve that reputation? Josh and Antonio weigh in on that debate and much more, including what works (and, more specifically, what doesn’t) about Michael Rapaport’s turn as Daryl Crowe Jr., their take on Raylan and Art Mullen’s growing divide, the set-up for next season between Raylan and Boyd with Ava caught in the middle, some last predictions for the final season, and much more. (Oh, and there’s also that one thing Josh and Antonio don’t discuss. You know, that one time with the thing that totally didn’t happen? That thing.)

With the rewatch now finished, Josh and Antonio are shifting their attention to the final season of JUSTIFIED. Each week, they’ll recap the latest episode right here on Post Show Recaps. Tweet at them during the show to get your questions answered on the podcast, and as always, use thePost Show Recaps feedback form to let us know how we’re doing.