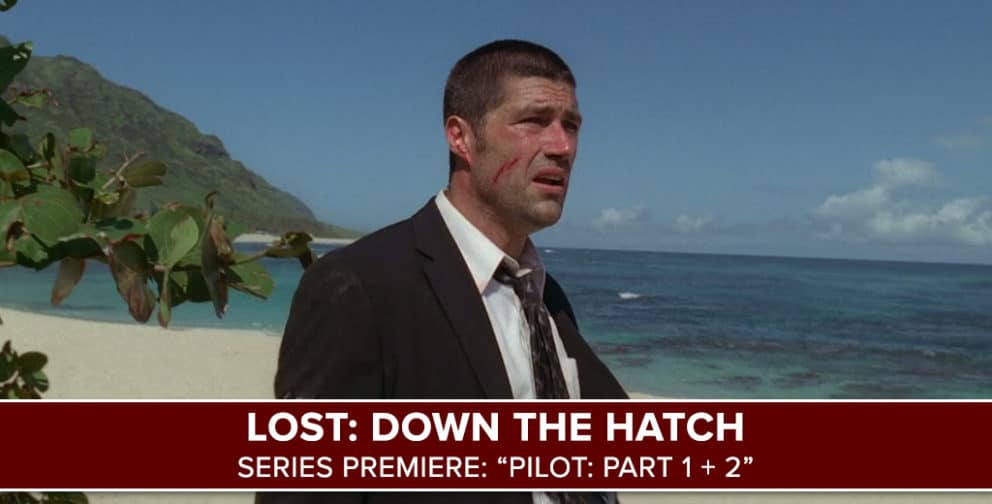 The LOST: Down the Hatch rewatch begins right here, right now, as Josh Wigler (@roundhoward) and Mike Bloom (@AMikeBloomType) head back to the island and all the way back to the two-part series premiere, “Pilot: Part 1 + Part 2.”

In a sprawling conversation that spans over three hours, Josh and Mike dig into every nook and cranny (okay, not every nook and cranny) of “Pilot,” with topics including the ways in which the opening minutes mirror the series finale, some tin-foil hat attempts to explain the monster’s motivations, the iconic ending and the “where are we” of it all, and so much more.

A refresher on the plot of “Pilot” …

LOST opens on an eye — because of course it opens on an eye. Spinal surgeon Jack Shephard (Matthew Fox) wakes up in a bamboo forest, and soon finds himself helping others who have survived the sudden plane crash of Oceanic 815. Jack meets Kate Austen (Evangeline Lilly), an unassuming survivor who is secretly a fugitive from the law, and the two of them join washed-up rocker Charlie Pace (Dominic Monaghan) on a mission to find the cockpit deep in the jungle. There, they encounter a vicious monster who kills the pilot and thoroughly horrifies our heroes.

The second half of the episode centers on Kate and Charlie joining fellow survivors Sawyer (Josh Holloway), Sayid (Naveen Andrews), Boone (Ian Somerhalder) and Shannon (Maggie Grace) on another trek through the island, hoping to reach high enough ground to send out a distress signal. Instead, they discover a distressing signal: a radio broadcast from a woman who has been trapped on the island for more than 16 years. “Guys, where are we” indeed. Oh, and there’s a polar bear — because of course there’s a polar bear.

“Pilot” was directed by J.J. Abrams, story by Jeffrey Lieber, Abrams and Damon Lindelof, with teleplay by Abrams and Lindelof. It aired on two separate nights: 9/22/2004 and 9/29/2004. Flashbacks center on Jack, Charlie and Kate, telling the tale of Oceanic 815’s crash from their points of view.

• 4 Stories – Each podcast begins with a discussion of four main stories from the episode, both in front of and behind the camera;

• 8 Sounds – The events of LOST pop right off the camera and straight into your ears with eight memorable moments replayed on the podcast;

• 15/16 Others – Josh and Mike answer questions and comments sent their way through the official e-mail address: [email protected]postshowrecaps.com

Each episode of Down the Hatch clocks in at no less than 42 minutes. If it clocks in at longer than 108 minutes, Josh and Mike have triggered a crisis! Consequences will ensue. Note that the 108 minute rule is not in effect for multi-part or bonus episodes, so a three-hour recap of the pilot is not an issue — but if Josh and Mike spend three hours on “Tabula Rasa,” we are truly, well, lost.

The Making Of The LOST Pilot: An Oral History (Empire Online)

Designing a Disaster (Documentary on the Oceanic 815 crash)

We Have to Go Back: Every Lost Episode Ranked, 10 Years Later (MTV News)