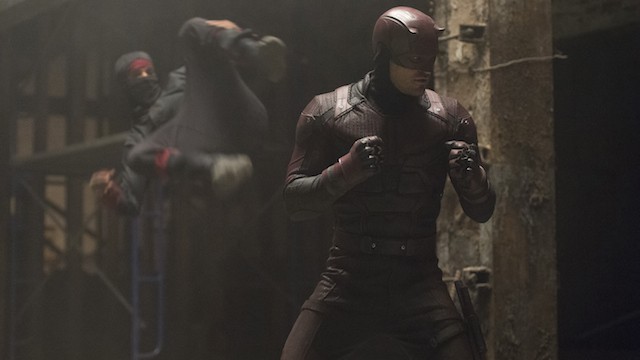 Who needs six bucks for postage when you have prison meatloaf to spare?

Matt Murdock finds out firsthand that even if the pen is mightier than the sword, it’s not always mightier than the fist — or Fisk, as it were — in episode ten of Marvel’s Daredevil season two, called “The Man in the Box.” Josh Wigler (@roundhoward) and Kevin Mahadeo (@kevmahadeo) join the hero as he visits an old nemesis in prison, yielding one of the most explosive and electric scenes of the season, if not the entire series.

Beyond the bars, “The Man in the Box” delivers huge reveals and payoffs, with several characters gunned down or otherwise murdered in cold blood by the end of the hour. Josh and Kevin unpack all the carnage and theorize about the identity of the mysterious Blacksmith, the Keyser Soze-esque drug dealer who doesn’t just want to flood the market with heroin, but wants to be the market. Plus, Josh and Kevin are each worried about the future of certain fan-favorite characters. Find out about those concerns and more in today’s podcast.

A new Daredevil podcast will drop every week day for the remainder of the season, continuing on April 4 with episode eleven, “.380.”