Rob Cesternino and Akiva Wienerkur didn’t have pretzels, but they were thirsty to start recapping the next episode in the Seinfeld series, despite the holiday season being in full swing. This week, they discussed “The Alternate Side”, which first aired on December 4, 1991, and was written by Larry David and Bill Masters. Akiva shared what shows Seinfeld was going up against on Wednesday nights at 9, the timeslot for season 3. It had to face Doogie Howser MD, Anything But Love, starring Richard Lewis of Curb Your Enthusiasm fame, and a rerun of Jake and the Fat Man.

There was some Seinfeld in the news this past week, as Larry David was a guest on Bill Simmons’ BS Report podcast. He discussed the Seinfeld finale, amongst other topics. He shared that he is reluctant to do another season of Curb Your Enthusiasm because he doesn’t want to face doing another finale. Rob and Akiva hoped that isn’t the case, as they both would love another season of Curb.

In Jerry’s opening standup, he does a bit about car alarms, and how annoying they are. The episode opens with Jerry in his apartment, realizing that his car has been stolen. George is there, wearing a Mets hat, which prompted Rob and Akiva to discuss how maybe they bounce back and forth between Yankee and Mets hats because Larry is a fan of both teams. Jerry and George are trying to figure out how a thief crosses the wires to get the car started.

Jerry decides instead of calling the police, he’ll call his car phone. When the thief picks up the phone (and it’s the voice of Larry David of course), Jerry asks him if he stole the car, which he admits. Kramer gets on the phone and asks the thief to mail him his gloves that are in the glove box. Jerry takes the phone back and asks him how he crossed the wires. The thief tells him that the keys were left in it.

Sid, the guy who moves Jerry and the rest of the apartment tenants cars, was the one who left the keys in the car. He is going on vacation, which gives George the idea to take over the car moving business while Sid’s gone. Sid seemed fine with George taking over for him, even though Rob and Akiva thought he agreed to it awfully quickly. Meanwhile, Kramer shares that he was asked to take part in the Woody Allen movie that is filming just downstairs.

In the next scene, Jerry and Elaine are waiting in line for Jerry to rent a car. Elaine is telling Jerry all about her new boyfriend Owen, who is a famous writer, but is 66 years old. Jerry finds it preposterous when she says Jerry would really like him, since he hates everyone. When they get to the counter, the lady informs him that they don’t have any midsize cars left, even though he had a reservation. Jerry chastises her for having taken the reservation, but not holding it. Rob felt that this is one of his favorite scenes.

Back at Jerry’s apartment, Elaine is second guessing dating this older guy, concluding that she needs to break up with him. George bursts in harried, looking for a bucket of water because a car was overheating. Kramer comes in as well, and he informs them all that he will now have a line in the Woody Allen movie, the iconic, “these pretzels are making me thirsty”. Each of the characters have fun with how they would say the line. Rob and Akiva shared how they would say the line as well. When George says his version of the line, everyone agrees that it was terrible.

The next scene has Elaine, who met up with Owen to break it off, bursts into Jerry’s apartment carrying Owen, who had a stroke. As Owen is laying on the couch unconscious, they try to feed him a cookie in case he’s in diabetic shock. Rob felt that this sequence was a particularly dark area to go. Akiva thought that if the particular storyline had been funnier, it might not have seemed so dark. They decided to track some of the darker storylines as they go through the series, plugging the Owen stroke at number one, and “The Pony Remark” at number two. Waiting for the ambulance, they learn that George got in an accident and caused a traffic jam, which delayed the EMTs from arriving quickly.

The paramedics finally get to the apartment to take care of Owen, wondering why there are cookie crumbs in his mouth. George comes up to share that it was Jerry’s rental car that he crashed and caused the traffic jam. Kramer tells him that he held up the Woody Allen movie, which caused Woody to refer to George as the “idiot in the blue jacket”.

When Sid comes back from vacation, he is not thrilled to learn that George caused such a fiasco with such an easy job. Kramer comes in to read a newspaper article about how Owen had the stroke, and he would have faired much better if a traffic jam hadn’t delayed the arrival of the ambulance. The article also talks about how the traffic jam shut down the Woody Allen film, making Woody second guess filming in New York ever again.

Back at the rental car place, Jerry is explaining that the car was in an accident, but he had the insurance. The lady at the counter says that the insurance doesn’t cover it because someone else was driving, so the damage will be north of two thousand dollars. Jerry responds with an emphatic, “these pretzels are making me thirsty”. Rob and Akiva estimated that between this, the stock tip and the suede jacket, Jerry is probably down around ten thousand dollars.

The next scene is at Elaine’s apartment, where she is feeding Owen Yankee Bean soup, struggling with his motor function and unable to talk. Both Rob and Akiva thought it was in poor taste to show Owen struggling from his stroke. Elaine picks this uncomfortable time to break it off with him, ending it with “these pretzels are making me thirsty”. The next scene is at the coffee shop, where Elaine is talking about how bad the subway smelled, wondering if you can die from long exposure to a stench. She also mentions that she bumped into Owen, who is doing well. He explained to her that he was only together with her for the sex. Kramer comes in, upset because he was fired from the Woody Allen movie. Kramer nailed the line, but when he set his glass down, it shattered, with a piece of glass cutting Woody.

The episode ends with him taking the brown gloves out of his pocket, the same gloves that he asked the car thief to mail back to him. Rob and Akiva enjoyed this callback. Jerry’s closing standup is a bit about how the best part of a relationship is being sick, since you have someone to take care of you.

“The Alternate Side” fell toward the middle of Akiva’s rankings, clocking in at number 99 (perhaps primetime Alex Stein’s favorite?). Rob felt that “The Alternate Side” had a lot of great jokes, but it’s hard to rank it high since he really didn’t enjoy the Owen storyline.

Next, they tackled a few emails. They start with an email from Chester, who wondered why Elaine mentioned having to transfer to a subway line that had been shut down in the 1980s, calling it more outdated than Elaine’s dresses. While Chester is in fact right, Rob felt that it was such a minor detail in the episode that it shouldn’t top the list of outdated references.

Johnny De Silveira emailed a question about whether Rob or Akiva ever had a reservation cancelled on them. Neither of them had anything cancelled on them, but they’ve had to wait a little longer with restaurant reservations from time to time. Johnny also asked if either of them have run into Woody Allen, since he heard you are not a true New Yorker until you run into him on the street. Neither have run into Woody on the streets of New York.

Special Thanks to Mike Moore for the latest episode recap! 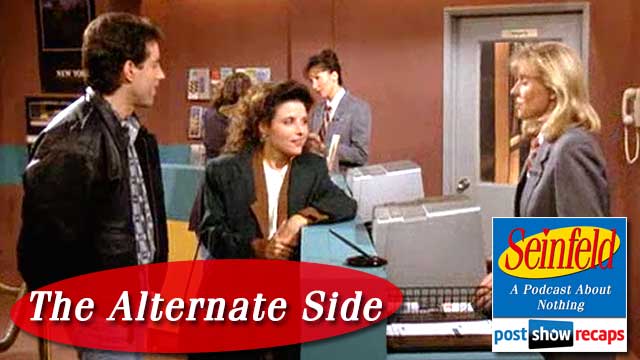