After a few days delay, Rob and Akiva reconvened to discuss the season two episode of Seinfeld called “The Apartment”. It aired on April 4, 1991, after the show was on a six-week hiatus. NBC decided to switch Seinfeld’s time slot to after Cheers, which Akiva pointed out was the best thing that could have happened to the show. Before getting started on the plot, the guys talked about a few shows they could cover after the run of Seinfeld episodes, and Akiva said he’d like to do a podcast about all the shows NBC has had in the spot after the big hit 9 o’clock shows, like Boston Common, Veronica’s Closet or The Single Guy.

Akiva did some extra research about the episode. It was not written by Larry David and Jerry, but a magazine writer named Peter Mehlman, who would go on to write 18 episodes in the show’s run. Akiva felt the episode was a bit off kilter from the usual style of the show. Rob watched some DVD extras about how Mehlman formed the idea for the plot. The original idea was to have Elaine move out of the city, but Jerry didn’t want her to. Larry and Jerry thought it better to have the premise of Elaine moving into Jerry’s building instead.

The opening credits standup has Jerry talking about painting his apartment, and how he thinks it gets smaller each time he paints. Rob and Akiva both thought that this bit didn’t correlate to the episode and was some of Jerry’s weaker material.

The first scene opens with Kramer showing off a different look, having moussed his wild hair down. Elaine invites Jerry to a “Marathon brunch”. Outside in the hallway, Harold and Manny, who Akiva and Rob believe to be the co-supers, are talking about how Jerry’s upstairs neighbor, Mrs. Hudwalker had died. They were looking for someone to rent the place, and it’s only $400 a month, an insanely low amount for an apartment in Manhattan. Jerry mentions how Elaine is looking for a place. Rob wondered if Harold and Manny had a romantic relationship, but Akiva felt that in 1991, TV wasn’t going there yet. Rob also pointed out that the actor who played Harold played the great role of Otho in the movie Beetlejuice.

Jerry comes back in to his place and teases Elaine with the big news he has. When he tells her the lady upstairs died and her apartment is for rent at a cheap price, they celebrate. Akiva said it was classic Seinfeld, celebrating death. This scene was the first ever time Elaine does her iconic “get out!” push of Jerry. Immediately after telling Elaine about the apartment, Jerry starts regretting it, lamenting about Elaine potentially popping in unexpectedly all the time.

In the next scene, George is walking out of Monk’s alone and bumps into Jerry. Rob noticed that it was one of the only times he remembered seeing a scene of the exterior of the coffee shop. Jerry explains to George how he screwed up telling Elaine to move in upstairs. George tells him he’s doomed. He’ll have to sneak into his apartment like a cat burglar and have to go back to his date’s place instead of taking them to his, referring to it as a permanent road trip where he’ll lose his “home field advantage”. Rob agreed with George’s take, finding it important to be at home where you know where everything is in that type of situation.

George then argues with Jerry that since he just left, he can’t go back into Monk’s. Rob and Akiva debate what’s worse, going to a diner or going to the movies alone. Rob said he had no social hang-ups, and wouldn’t mind either. While in the coffee shop, Jerry tries to come up with ways of talking Elaine out of moving in to his building. All he can come up with is that the water flow is too weak, which George counters that for rent that cheap she’d bathe in the toilet. Rob thought this could be a precursor to the episode “The Showerhead” with all the talk of weak water flow.

After a clunky segue where Jerry comments on a woman feeding a baby greasy corn beef hash, George starts telling Jerry about his friend Adam with the flat head who just got married. He told George that wearing the wedding ring has caused woman to hit on him more. Akiva and Rob debated this idea, and felt that it’s more of an old wives tale. Jerry then mentions to George that this could be an interesting sociological experiment, noting that Kramer has his father’s old ring that George could put on.

Back at Jerry’s apartment, George is trying on the ring, and Kramer tells him not to mess with that, but to get a rug or hair plugs. Rob said that George’s baldness seems to be a regular topic in the early seasons. Akiva and he debated the ages of the cast at the time and agreed that they seem to be in their mid to late 30s. Harold and Manny come back in fighting about who they are going to give the apartment to. Manny was offered $5000 from someone else, but is willing to give it to Elaine if she gives him the money instead. Rob and Akiva thought that the show was hoping for Harold and Manny to become recurring characters, like a Newman.

Jerry goes back into his apartment to tell George how lucky he is. Elaine walks in soon after happy as can be until Jerry gives her the news about the $5000 price tag. Kramer comes in and hears about it, but immediately tells Elaine to just borrow the money from Jerry, since he’s good for it. Akiva and Rob felt this scene was a little too “sitcom-y”, but did find it enjoyable. They also agreed that $5000 was way too much money to ever lend to a friend. Nearly convinced by Kramer, Elaine decides to take one last look at the apartment. When she leaves, Jerry yells at Kramer for ruining it, but Kramer doesn’t understand why. Jerry tells him he is a pod, whereas Jerry’s a human, who notices the uncomfortable situations in life. Rob and Akiva thought this was too harsh of Jerry, that no one would talk to Kramer like that.

The following scene is at the marathon day brunch.. Rob found it confusing to follow all the characters playing Elaine’s friends who didn’t seem to have a real purpose to the scene. George is with them, wearing the wedding ring to test the theory. Talking to several different women, they all seem to be impressed with him. However, they seem to want the single version of him. The scene cuts back to Elaine and Jerry talking about how the host Roxanne seems to like Jerry. This segues into Elaine asking him if he thinks it will be weird to bring a woman home with her living just upstairs. He brushes it off, but then instantly realizes he just missed his chance to get out of the situation.

Jerry and George then meet back up to discuss who is the bigger idiot; Jerry blowing his chance to keep his ex-girlfriend from moving in to his building, or George, who passed up a lifetime of guilt free sex and great seats to all the Madison Square Garden events. Then he utters an iconic line “Please, a little respect. For I am Costanza, Lord of the Idiots.” Rob pointed out that this was not one of the greatest episodes, but that was one really great line. The scene ends with a lady at the party telling the runners that they are all winners, which has George say that a new contender for Lord of the Idiots has emerged.

Back at Jerry’s apartment, Kramer tells Jerry that he found someone who will pay $10,000 for the place. He sarcastically tells Jerry that as a pod person, he likes to help the humans. The scene fast forwards to a few weeks later with Jerry, Elaine, Harold and Manny standing in Jerry’s apartment with music blasting from upstairs. Akiva and Rob thought that the music was pretty poorly dubbed in during editing. Harold and Manny won’t go tell them to turn down the noise because, according to Manny, they smell. Elaine tells Jerry it’s too bad she didn’t move in because he’d never hear a peep out of her. The show ends with Kramer coming in rocking out to the music, telling Jerry it’s his favorite song they’re playing.

Rob and Akiva believed this to be a pretty soft ending. They noted that this is the last we ever hear of the loud neighbors, and the last we see of Harold and Manny. During the closing credits, Jerry’s standup is about being shushed. Rob found it entertaining, but Akiva didn’t like how Jerry referenced Fred Mertz, Ethel’s husband on I Love Lucy, when just a couple episodes before, Jerry said he’d never seen the show.

In comparison to the other episodes of season two, Akiva thought it was not up to par with most. Rob thought it was a step backwards after the last few being so strong. Both put the episode on the level of “The Ex-Girlfriend”, but well below “The Pony Remark”, “The Jacket” and “The Phone Message”.

They next read some emails. One from Ariel, that included clips of the original cotton Dockers commercials that Akiva found “unfathomably bad”, asked what their most dated piece of technology is, and it’s that both still have VCRs in their homes. Hunter S. emailed that he found it unrealistic that Elaine would borrow that much money from Jerry, and thought this was the worst episode of season two. He wondered what their thoughts were. Both agreed that they couldn’t lend that much money to a friend.

An email from Eric B included a point about how in “The Stock Tip”, Jerry didn’t actually lose all $2500 he invested, in case they wanted to update their tally of Jerry’s lost money. John Davis emailed how he and his ex-wife had the same exact argument over the cotton Dockers commercial. He also recommended that they watch some clips of the actual Algonquin Roundtables. Lastly, Akiva got a tweet from Ariel that noted how Larry David will be starting a Broadway show in 2015, which means there will be no new episodes of Curb Your Enthusiasm until after, if ever again. You can send your email questions to [email protected] or leave a voicemail by going to postshowrecaps.com/voicemail.

Tune in later this week when Akiva and Rob will recap the next episode called “The Statue”. Akiva is excited for the big breakout moment for the Kramer character that happens. You can follow Akiva and Rob on Twitter @keev26 and @robcesternino

Special Thanks to Mike Moore for this week’s episode recap 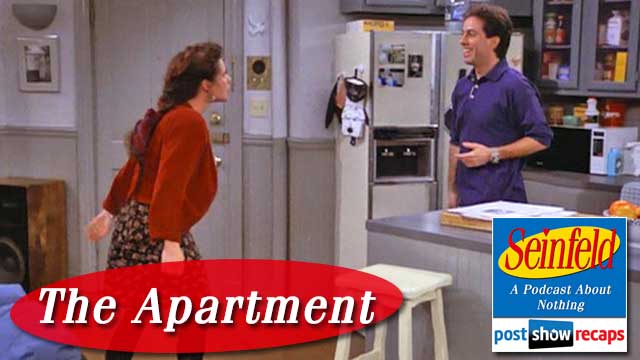 Seinfeld: “The Apartment” – The Post Show Recap of Season 2, Episode 5