Rob Cesternino and Akiva Wienerkur continue their journey to watch every Seinfeld episode as they discuss Season 9, Episode 8, “The Betrayal.”

You can get a discussion going by leaving a comment on the show pages, and as always, you can follow them on Twitter @robcesternino and @keev26. Don’t forget to subscribe to the podcast by going topostshowrecaps.com/seinfelditunes where you can rate and review the podcast.
Send in your questions by emailing [email protected]. Tune in next week as the guys will recap “The Apology”.
Emails –  Finally, Chester chimed in with an array of takes.  Amir thought George only wanted Nina because Jerry never got her.  Dan the benefactor had Newman’s back when Jerry insulted him in his own apartment, noting that Jerry was out of line.  Alex pointed out a continuity error based on a crossover episode of Mad About You.  Vicki asked if either of them have tried clams casino.  Lindsay asked if they’ve attended a destination wedding.  Ariel asked if they think the episode would still be funny if watched in normal order, to which Akiva decided Mike Bloom needs to test the theory.  Leading off as always, Johnny De Silveira asked how Jerry and George decided they would go to India for a wedding they weren’t invited to.
Episode Ranking – 12
Kramer’s storyline – While he is invited to go, Kramer stays home from the trip to India to deal with a problem he is having with FDR (Romanowski).  Kramer attended FDR’s birthday party, but when he blew out his candles, he gave Kramer an evil look.  He reveals to Kramer later that he wished Kramer would drop dead.  Desperate to get this jinx off of him, Kramer tries to take Newman’s wish, then tries wishing wells, eye lashes, and wishbone.  In the end, FDR was just upset about Kramer hitting him with a snowball, so Kramer agreed to let FDR hit him with one to even up the score.  Grade: Akiva – 2 sari’s in a sock, Rob – 2 sari’s in a sock
Elaine’s Storyline – Elaine has been invited to attend Sue Ellen Mischke’s wedding in India, though she suspects Sue Ellen invited her last minute as an “unvitation”. She buys tickets for them all to go, but Kramer declines, leaving George to take his new girlfriend Nina.  Soon after arriving, Elaine discovers she had a romantic relationship with the Pinter, the groom to be, years ago when he went by the name Peter.  She swears Jerry to secrecy, but he tells George who shouts it out during the wedding ceremony, causing Sue Ellen to call off the wedding.  Grade: Akiva – 3.5 sari’s in a sock, Rob – 3 sari’s in a sock
George’s Storyline – George wants Jerry to set him up with a woman he used to date named Nina.  But when he met her on the street, he was wearing boots that made him taller, leaving him compelled to keep wearing them every time he sees her.  When Kramer decides not to go to India, George jumps at the chance to bring Nina.  While in India, George notices Jerry acting strange, so he gets Elaine drunk so she can spill the beans.  She tells him Jerry did sleep with Nina, but he can’t say anything.  When chaos starts to ensue at the wedding, George brought the whole thing to a halt when he shouted out how Elaine had slept with Pinter.  Nina revealed she didn’t like either of them, and only wanted a free trip to India.  Grade: Akiva – 3.5 sari’s in a sock, Rob – 3 sari’s in a sock
Jerry’s Storyline – Jerry agrees to set up George with a woman he used to date but never slept with. He liked her, but didn’t connect because they communicated so well, there were never awkward pauses.  When he talks with her about George, there is an awkward pause, and they sleep with each other right there.  Elaine finds out, but agrees to never tell George.  Jerry goes along to Sue Ellen’s wedding with Elaine, and while there, he gets Elaine drunk so she’ll reveal what George has been upset about.  She tells him George got her drunk and she spilled the beans about  Nina and Jerry.  Grade: Akiva – 3.5 sari’s in a sock, Rob – 3 sari’s in a sock
Rob Cesternino and Akiva Wienerkur laced up their big boots and are ready to bring you the next Seinfeld Post Show Recap. This time the guys discussed “The Betrayal”, which first aired November 20, 1997 as part of season nine. The episode was written by Peter Mehlman and David Mandel.
Seinfeld Post Show Recaps: The Betrayal 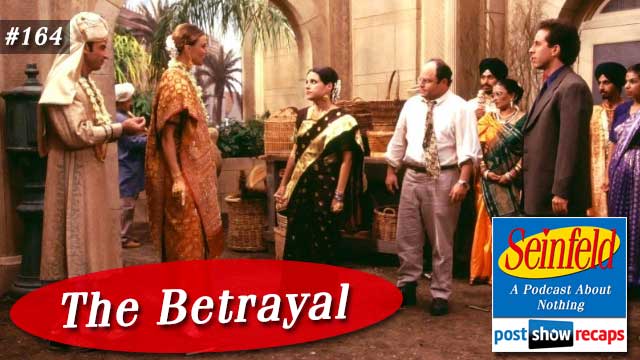