Rob Cesternino and Akiva Wienerkur continue their journey to watch every Seinfeld episode as they discuss Season 9, Episode 4, “The Blood.”

Seinfeld Post Show Recaps: The Blood
Rob Cesternino and Akiva Wienerkur have lit their cream soda incense and are ready to bring you another Seinfeld Post Show Recap. This time they discussed “The Blood”, which first aired October 16, 1997 as part of season nine. The episode was written by Dan O’Keefe.
Jerry’s Storyline – Jerry starts to turn healthy after everyone remarks that he is gaining some weight.  When freaking out over Kramer keeping his blood at home, an exacto-knife accidentally cuts him, with Kramer’s blood going in him in the transfusion.  His parents hire Izzy Mandelbaum to get him in better shape after hearing of this incident.  When Izzy discovers all of Kramer and Newman’s sausage in his apartment, he ties Jerry to the back of his car and makes him run it off.  Izzy Jr. accidentally hits the gas too hard when blood drips on his shoe and causes Jerry to get dragged.  He goes to the hospital for another transfusion, this time though, from Newman.  Grade: Akiva – 1.5 pints of blood, Rob – 2.5 pints of blood
George’s Storyline – George’s new girlfriend Tara lights incense before getting intimate, causing George to get so hungry he leaves abruptly for the diner.  Transfixed by this now, George tries bringing in food to the bedroom, which works well at first.  He tries to take one step too far though when he is caught trying to watch TV and eat during sex.  The food and sex confusion starts getting more complicated for him when he gets flush just from eating.  George learns that Elaine’s friend Vivian is actually his perfect match when she shares his erotic desires for pastrami too.  Grade: Akiva – 3 pints of blood, Rob – 3 pints of blood
Elaine’s Storyline – Elaine’s old friend Vivian asks Elaine if she knows anyone responsible enough to watch her son, completely disregarding Elaine.  She’s further offended by this when Vivian asks Kramer instead, which leads to her attacking Kramer at Vivian’s doorstep so she can prove her worth.  The kid ends up being a nightmare, and when Vivian has a health scare, she asks Elaine to be her son’s guardian if something happened.  Elaine goes to great lengths, including smoking cigars and sleeping on the job to get her to change her mind, but to no avail.  After George sleeps with Vivian though, Elaine gets out of the responsibility.   Grade: Akiva – 2 pints of blood, Rob – 2 pints of blood
Kramer’s storyline – Kramer is upset with his blood bank over a price increase, so he decides to store his blood at home instead, much to Jerry’s dismay.  So paranoid over the thought of the blood, Jerry has an accident that causes him to need Kramer’s blood in a transfusion.  Meanwhile, Kramer and Newman use Jerry’s apartment to watch a video on how to make sausages, then stay there to actually make them.  When they run out of freezer space from all the sausages, Kramer’s forced to bring the blood back to the bank.  Jerry’s car overheats on the way there, so Kramer uses the blood to keep the car running.  Grade: Akiva – 1.5 pints of blood, Rob – 2.5 pints of blood
Episode Ranking – 113
Emails – Johnny De Silveira noted that “The Blood” was Lloyd Bridges’ final TV appearance.  Kaia wondered if her boyfriend is a loser for passing out when giving blood.  Lindsay asked if they give blood, and also wondered if they have anyone in their life that owe them a favor.  Craig wondered what things their kids have destroyed of theirs.  Matt asked why Izzy Mandelbaum would even want to train Jerry after all he put him through.  Caleb asked them to rank the core four in who they would let babysit their kids.  Amir noted that Kramer backed down in a fight numerous times, disproving his theory for why he needs to keep the blood.  Finally, Chester chimed in with an array of takes.
Tune in next week as the guys will recap “The Junk Mail”. Send in your questions by emailing[email protected]. Don’t forget to subscribe to the podcast by going topostshowrecaps.com/seinfelditunes where you can rate and review the podcast. You can get a discussion going by leaving a comment on the show pages, and as always, you can follow them on Twitter @robcesternino and @keev26. 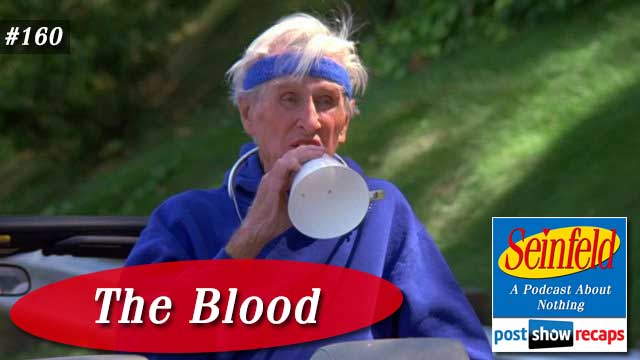