Rob Cesternino and Akiva Wienerkur continue their journey to watch every Seinfeld episode as they discuss Season 4, Episode 8, “The Cheever Letters.”

Rob Cesternino and Akiva Wienerkur didn’t use a short week as an excuse to procrastinate as they knocked out another recap in their quest to cover the entire run of the Seinfeld series for Post Show Recaps. This week, they covered “The Cheever Letters”, which first aired October 28, 1992 as part of the forth season. Akiva felt the episode title was one of the worst. He and Rob discussed better alternatives, ultimately coming up with “The Dirty Talk” as a replacement.

There was a bit of current Seinfeld news this week. Jerry did an interview where he talked about YouTube being a content garbage can, and how show business should be reserved for talent, and not just anyone with an internet connection. Rob felt that Jerry’s age may have him a bit out of touch with today’s way of doing things.

Jerry’s standup is a bit about how offices are like a stationary store with all the supplies that get stolen. The episode opens with Jerry and George talking over the events of the cabin burning down. Rob and Akiva noted this was in leiu of a “previously on” to bring the audience up to speed.

The episode opens with Jerry and George finally working on writing the pilot, and its going quite poorly, with them using every excuse to procrastinate. When Jerry calls Elaine, her assistant talks on and on, prompting him to complain to Elaine about it. Elaine brings it up to the assistant right after, so she knows it was Jerry who complained. She exclaims that she can’t work like this, and quits.

In the next scene, Kramer comes in clamoring to George for more cigars from Susan’s dad. George explains how that’s not going to happen since Kramer burned down the cabin with the original cigars. Kramer says that he needs something to trade the golf pros because he can’t go back to playing public courses.

George and Susan are at dinner with her parents, who are making their first appearance on the show. Mr. Ross starts asking about the cigars, then the cabin. George does his best to suck up to Mr. Ross, though can’t hide his discomfort. Rob and Akiva enjoyed how Mr. and Mrs. Ross cut each other down throughout, adding to the awkwardness.

Jerry and Elaine are at Jerry’s trying to fix Sandra quitting because of Jerry’s complaint. He calls Sandra to explain that he’s a comedian and Elaine thought he was being sarcastic when he said it was a real treat talking to her. Sandra understands, and asks Jerry out for drinks, to which he reluctantly agrees. The scene cuts back to the Ross house, where Mr Ross is talking about how important the cabin is. George finally blurts out the cabin burned down after beating around the bush enough. Mr. Ross is distraught by this, and solemnly walks out of the room while Mrs. Ross cackles in delight, since she hated the cabin.

After their date, Jerry and Sandra are back at Jerry’s fooling around. We see her storm out of his bedroom, upset about something Jerry says while talking dirty. He begs her not to tell Elaine about this, but she indicates that wont be the case. Later on, Jerry is at the diner explaining what happened on the date with Sandra to George. She started making advances while out, so they went back to his place. While fooling around, she started the dirty talk, which he had a difficult time keeping up with. When she started talking about her panties, Jerry responded with “you mean the panties your mother laid out for you”. George can’t believe he said something so abnormal.

Jerry and George finally get back to working on the pilot, but Kramer comes in, which they welcome with open arms for a change. When George confirms that he won’t ask Mr. Ross for more cigars, Kramer decides to take matters into his own hands. Rob pointed out how difficult it is to write as a team, and these two lazy guys have it even worse. Still blocked, Jerry and George decide to go to the movies for inspiration. Elaine calls to talk about how Sandra is coming back to work, though now Jerry is trying to convince Elaine to not take her back, so she won’t tell Elaine about the embarrassing encounter.

Kramer is now at the Cuban embassy trying to convince them to give him some cigars. One of the diplomats there likes Kramer’s jacket, calling back a season three bit, and offers to trade cigars for it. In the next scene, Jerry and George go to the Ross apt to bring back some sunglasses. An insurance person shows up with a box recovered from the fire. In it is a bunch of letters that John cheever wrote to Mr. Ross, indicating they had an affair. While Susan is reading the letters in front of everyone, Mr. Ross comes in and hears, causing him to scramble to take them away from being further read aloud. Rob mentioned how George has single handedly destroyed Susan and her family’s life in such a short period of time.

Back at Jerry’s, Jerry and George are again trying to work on the pilot script. They’ve added in “hows it going”, giving them three total lines so far.. Elaine comes in complaining about how she had Sandra transferred per Jerry’s request to get rid of her, but she blabbed to Mr. Lippman about Elaine making long distance phone calls, which she now has to pay for. Jerry offers to pay the bill, thinking he is out of the woods now from the panties talk.

Kramer is out in the hallway on his way to the country club with the Cuban diplomats and the cigars. Rob liked the idea of becoming a diplomat, if only for the immunity. Back inside the apartment, George is reading a John cheever book, The Falconer. As Elaine goes to leave, she says she had to go to her mothers since she bought her panties and they are all laid out for her, with Jerry frozen in embarrassment. The episode ends with Jerry’s last standup bit about talking dirty.

In 2015, there weren’t really any things that wouldn’t work, making it one of the few episodes without any dated content. Akiva thought this was one of the weakest episodes of season four, and ranked it at 102. Rob agreed, thinking this was the one episode from season four that didn’t immediately stand out. Akiva mentioned his twitter research showing that all 180 episodes have someone calling it their favorite or one of their favorites.

There were a few emails to go through this week. Travis wrote in and mentioned the dinner party with Mr. and Mrs. Ross was an iconic moment. He wondered if Rob and Akiva had similar uncomfortable dinners with their respective in-laws, which they hadn’t. Ryan emailed to point out how George gave Jerry the middle finger when Jerry’s on the phone with Elaine toward the beginning of the episode. Rob and Akiva hadn’t noticed it. He also commented how Mr. Ross saying “wear more lipstick” as a response to Mrs. Ross complaining about the cigars was a great line.

Amir emailed in to mention how fire has such a crucial role in so many episodes. Lastly, Johnny De Silveira pointed out that the writer John Cheever had a child named Susan. He also noted that Cuban cigars are no longer illegal with the embargo between the U.S. and Cuba now lifted.

Tune in next week as the guys will recap “The Opera”, which marks the return of Crazy Joe Devola. Send in your questions by emailing [email protected]postshowrecaps.com .  Don’t forget to subscribe to the podcast by going to postshowrecaps.com/seinfeldITunes where you can rate and review the podcast.  And as always, you can follow them on twitter @robcesternino and @keev26.

Special Thanks to Mike Moore for the episode recap. 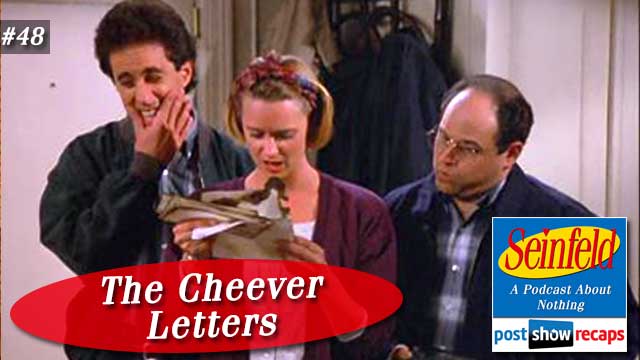