Rob Cesternino and Akiva Wienerkur continue their journey to watch every Seinfeld episode as they discuss Season 6, Episode 4, “The Chinese Woman.”

Rob Cesternino and Akiva Wienerkur are out there and loving every minute of their weekly Seinfeld Podcasts. This week they break down “The Chinese Woman” which first aired October 13, 1994, and was written by friend of the show Peter Mehlman. This episode also marks the halfway point in the series.

Before the weekly news, Akiva announced that he secured a special guest for the “halfway home” episode 90, with Donna Chang herself, Angela Dohrmann joining the guys to weigh in on the episode. In other news, Larry David will be hosting Saturday Night Live the night before the Super Bowl. Also, in a syndicated column, someone sent in a letter describing the exact story of Keith Hernandez and Jerry in “The Boyfriend”.

Jerry’s storyline is largely one that wouldn’t fly in politically correct 2016. In an attempt to call George, the line gets crossed and he chats with this woman Donna Chang, who he develops an immediate interest in because he’s always wanted to date a Chinese woman. When he meets Donna for dinner, he realizes she is Caucasian and not Chinese, and that her last name was originally Changstein. After a few more stereotypical comments and lifestyle choices by Donna, Jerry has had enough and decides to call her on it, telling her she’s not Chinese.

Elaine is once again getting her friend Noreen in relationship trouble when she constantly hangs up on her new boyfriend because he engages her in long conversations. She learns that Noreen’s relationship is on the rocks because he’s paranoid about all the calls to the house where someone hangs up. In a scene similar to last week, Elaine and Noreen are talking at Monk’s, and Noreen seems to want to take a cue from Elaine once again and dump her boyfriend for his idiosyncrasies. Her story finishes when Kramer starts to intercept all her calls to Noreen, effectively keeping her from further influencing Noreen.

George has a smaller story in this episode. When he learns that Jerry and Elaine saw Frank in the city with a man wearing a cape, he tries to figure out why. His story intersects with Jerry’s when Estelle ends up talking with Donna Chang when the lines get crossed. She shares with George that his parents are getting a divorce, sending him in a tailspin, since now he’ll have to spend twice as much time visiting them separately. When Estelle makes another call that rings to Donna, Donna effectively changes Estelle’s mind and the divorce gets called off. Donna and Jerry go to dinner at the Costanzas, and when Estelle sees Donna is not Chinese, she wants to go through with the divorce, since she won’t take advice from a woman from Long Island.

Kramer spends most of the episode trying to get used to not wearing jockey underwear, since Jerry has him worried that the jockeys can cause low sperm count and he wants to one day have kids. He later visits the clinic to confirm this is true. After struggling with boxer shorts, he decides to go all the way free, much to the chagrin of Jerry and Elaine. His story intersects with Elaine’s when he tries to keep her from further negatively influencing Noreen. At the end of the episode, he yells out the window to Jerry that Noreen is late, so the Kramer name might just live on.

Rob and Akiva had a couple of great tangents. First, they debated whether Donna Chang purposely tries to make people think she is Chinese. Akiva thought that was her goal, but Rob thought if she did, she wouldn’t meet the people in person, so she could keep them thinking that she is Chinese. They discussed at length how some of these jokes about race would absolutely not work in today’s television. Lastly, they try to figure out why Noreen would be trying to jump off a bridge at the end of the episode. Akiva thought the combination of possibly being pregnant and the string of boyfriends she’s dumped over the last few weeks led to her to this.

In 2016, besides the politically incorrect storyline, there were just a few things that wouldn’t work from this episode. Capes are still quite unfashionable. Akiva thought Clue is not a game being played anymore, and there has since been the invention of the boxer brief. You could also figure out what Donna Chang looks like on Facebook.

In grading the storylines, Akiva thought Jerry deserved a B+, while Rob agreed. Elaine got a C, George got an A-, and lastly, Kramer had some great lines, earning him an A. Akiva thought this was an underrated episode, so he ranked it at 65.

After the recap, Angela Dohrmann joined the guys for an interview. They asked her if she thought Donna Chang was intentionally trying to trick people into thinking she’s Chinese. She said she played the character oblivious to it. She talked about how she wasn’t too familiar with Seinfeld before she was on it, but enjoyed the strange storyline, so was excited to be a part of it. She also talked about how she wasn’t too nervous to be a part of the show, but delivering the “ridicurous” line was a little nerve-racking. One of her favorite parts of being on the show was getting to meet Jerry Stiller. Before signing off, she noted that she’s been teaching improv classes in New York.

There were some great emails in the bag this week. Dan the donator shared that season five earned $231 for Baby Buggy. Johnny De Silveira asked why the show didn’t tell the viewers if Noreen was pregnant. Akiva thought she wasn’t pregnant, and certainly didn’t kill herself. Craig noted that the low sperm count from wearing jockeys is a myth. Dr. Thomas the medical correspondent did some research and learned that jockeys do have a bit of a negative impact due to them keeping the area too warm. Harry emailed in to praise the episode for it’s great quotes.

Travis wondered if Seinfeld would be a network show, or if it would be better suited for a cable or streaming outfit. Rob thought this episode would be a good fit for a show like It’s Always Sunny in Philadelphia. Amir thought it could be deemed racist to assume a woman named Chang would be Chinese, and that not referring to her as Asian could be a bit racist. Finally, Chester wondered if the guys wear boxers or briefs. Akiva wears boxers, with a few boxer briefs, while Rob is in the same boat. Chester also noted that women don’t like revealing a pregnancy too soon, and wondered if Kramer would get in trouble for talking about it so early on.

Tune in next week as the guys will recap “The Couch” with the return of Poppie. Send in your questions by emailing [email protected] ps.com. Don’t forget to subscribe to the podcast by going to postshowrecaps.com/ seinfeldITunes where you can rate and review the podcast. You can get a discussion going about the podcast by leaving a comment on the show page, and as always, you can follow them on Twitter @robcesternino and @keev26. 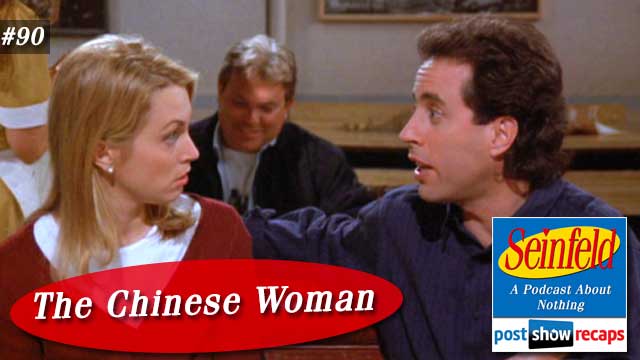