Rob Cesternino and Akiva Wienerkur continue their journey to watch every Seinfeld episode as they discuss Season 5, Episode 10, “The Cigar Store Indian.”

After getting the stain out of their coffee table and organizing their TV Guide collection, Rob Cesternino and Akiva Wienerkur sat down to discuss another episode of Seinfeld. This week, they broke down “The Cigar Store Indian”, which first aired December 9, 1993 as part of season five. The episode was written by Tom Gammill and Max Pross.

After reading the Seinfeld tweet of the week about political candidate Bernie Sanders sounding like Larry David’s impression of George Steinbrenner, Rob played an audio clip confirming the similarity. No other news and no Scene It question this week.

Jerry’s standup bit is about how Dads’ style tend to stay stuck in whatever year was their best year when they were younger. The episode opens at George’s parents house. First Kramer uses the guest soap, then Jerry puts his cup directly on the coffee table without a coaster. George freaks out, since he’s not allowed to have “parties” while his parents are gone on vacation. He has to bring the table in to have it refinished, but Elaine needs to get home for her poker game. She needs something to read, so Jerry gives her Frank’s TV guide.

On the subway, Kramer is telling Elaine about his idea for a coffee table book about coffee tables. He also mentions how the next stop has a gyro stand that if timed right, he can run and get one then get back on the train. Akiva debunked this as a possibility, since the doors don’t stay open that long. Rob tasked the listeners to time the subway doors. Kramer runs out to get the gyro, but the doors close on his arm, and someone snags the gyro right from his hand. A nerdy man strikes up a conversation when he notices Elaine reading the TV Guide. When she gets off the train, she leaves the TV Guide, and the man grabs it and notices Frank’s address on it.

Jerry and George are at the furniture store, and Jerry wants to buy Elaine a gift as an excuse to go to the poker game and see her friend Winona, since he has a crush on her. He decides to get a wooden cigar store Indian. Rob and Akiva thought doing such an insensitive thing would be a better storyline for George instead of Jerry. While waiting, a saleswoman starts talking with George about how there are no cool guys in this neighborhood, so she’s surprised he’s there. Confident George comes out for this conversation.

At Elaine’s, she and her girlfriends are all playing poker when Jerry shows up with the Indian. The note attached is littered with inappropriate jokes about Native American heritage, causing Winona to leave. Back at George’s parents, he’s brought the saleswoman Sylvia back there for a rendezvous. Rob wondered why this woman would just come back and have sex with George just like that.

In the next scene, Jerry is at Winona’s trying to apologize. Meanwhile, Kramer came by Elaine’s to get his bowling ball and accepts taking the Indian when Elaine wants to get rid of it. Cut back to Jerry and Winona, he invites her out to eat in an effort to further make up for it. He asks a mailman where the nearest Chinese restaurant is, but the man was Asian and took offense to being asked, further upsetting Winona. When Kramer rides by in a taxi, he makes some insensitive Native American noises to bring attention to the wooden Indian.

Back at George’s parents, Jerry is complaining about being considered racist. Frank and Estelle come in, with Frank noticing his TV Guide is not there right away. Estelle yells from the bedroom, then comes out with an empty condom wrapper. George owns up to having sex in their bed, and Jerry immediately bails out on George. Akiva and Rob thought George could have come up with a good excuse to get out of this, and wished that the premise of Frank grounding George would have been expanded.

Jerry and Winona are at her place deciding to go out to dinner. Jerry overcorrects his lack of PC consciousness, and can’t say anything without thinking it’s offensive. He notices the TV Guide and she lets him take it to give to Frank. In the next scene, Kramer comes in asking if Elaine talked to her boss about the coffee table book idea, which she hadn’t. He heads out to try and sell the Cigar Store Indian.

Back at the Costanza’s, Frank is still upset about the TV Guide when the nerdy man from the subway shows up with the TV Guide cut up to look like a bouquet of flowers. He comes right in and starts talking TV with them. Meanwhile, Elaine is on the subway and notices she’s at the stop where the gyros are sold. She knocks an older lady out of the way on her quest to make it there and back in time.

Later on, Jerry and Winona are at Jerry’s, and Winona asks for the TV Guide back. Jerry argues with her about it, nearly calling her an “Indian giver”. Back at the Costanza’s, Ricky the nerdy guy is still talking about TV Guide with Frank when Elaine shows up with Winona’s copy. She accidentally spilled gyro sauce on it, so Frank yells at her, and Ricky defends her. Meanwhile, Kramer is at the cigar store trying to sell the Indian statue where he runs into Mr. Lippman, who is interested in buying it for $500.

Kramer helps Lippman bring the Indian back to his office, and starts telling him about his coffee table book idea. Lippman thinks it a great idea, even admonishing Elaine for not bringing him ideas like this. The scene cuts to Estelle at the furniture store, where Sylvia the saleswoman remarks that she has George’s table. Estelle quickly corrects her, then points out that George lives with them and is a bum.

Elaine is back on the subway with Jerry, who tries to get the gyro himself this time, but also gets his hand caught coming back in. Al Roker, who is on the cover of the very TV Guide that caused them so much grief, snatches the gyro out of Jerry’s hand and sits down next to Elaine, who stares at him mouth agape. Jerry’s closing standup is a bit about TV Guide.

In 2015, the political correctness would be much more prevalent, Elaine could just play on her phone on the subway, Kramer could self publish his coffee table book, and of course TV Guide is completely unnecessary. Akiva didn’t think this was a bad episode, but there were a lot of storylines that didn’t pay off, so he ranked it at 122.

There were a few emails this week. First, Elaine emailed with her top ten reasons she should be the attractive woman correspondent. The guys accepted her bid. Their medical correspondent Thomas noted that it isn’t unusual for a doctor to treat a friend if in an emergency. Paul emailed in to confirm that the Pope has indeed been brought up before on the show. Johnny De Silveira emailed in wondering if they collect anything unique or different. Rob doesn’t collect things and Akiva mentioned collecting pogs. Amir noted a disappointing fact that the “6” train does not go through Queens, and wondered if this episode were made today, if Jerry would have been a Redskins fan. Lastly, Chester pointed out that the Costanza’s address shown on the TV Guide has an incorrect zip code.

Tune in next week as the guys will recap “The Conversion”. Send in your questions by emailing [email protected]postshowrecaps.com. Don’t forget to subscribe to the podcast by going to postshowrecaps.com/ seinfeldITunes where you can rate and review the podcast. You can get a discussion going about the podcast by leaving a comment on the show page, and as always, you can follow them on Twitter @robcesternino and @keev26.

Special Thanks to Mike Moore for the episode recap! 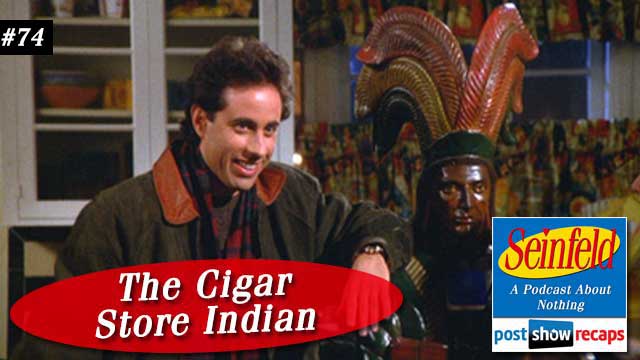