Rob Cesternino and Akiva Wienerkur continue their journey back to recap every Seinfeld episode. This week Rob and Akiva discuss “The Deal”

A broken refrigerator and a holiday weekend delayed, but couldn’t stop Rob and Akiva from discussing the next episode in the Seinfeld series titled “The Deal”, which aired as the season two finale in 1991. As Akiva pointed out, this episode is seminal for the series due to Jerry and Elaine deciding that they could be friends with benefits. Though in today’s time the idea of having a physical relationship with someone who’s just a friend isn’t a complicated process, it was a big deal in 1991. Even though Seinfeld decided to put Jerry and Elaine together, it would only last for the one episode, then all would reset back to normal for the start of season three.

The guys were ready to jump right into the episode plot after their two weeks off. In the opening standup, Jerry is doing a bit about the differences between men and women trying on clothes. Once again, the joke does not tie into the episode plot. Both found this routine to be classic Jerry standup, though they believed it to be quite dated material.

The opening scene has Jerry and Elaine sitting on the couch in Jerry’s apartment watching TV. Rob felt like this was a particularly long scene of just them talking, which Akiva confirmed that it was over six minutes. While they are flipping through the channels, Elaine comes across “the naked channel”, which peeks both their interest. The guys wondered if Jerry just happened to have the money to get the Playboy Channel, or if the typically scrambled channel all of a sudden came in clear. Elaine and Jerry both start talking about how it’s been a while for both of them since they’ve had any sex, and Elaine notices Jerry giving her a “look”. Jerry thinks since they’ve done “that” a bunch of times in the past, why not do “that”, but just as friends. Their only concern is whether or not doing “that” would ruin their friendship. Rob thought that the only thing about this sequence that was off was that a conversation like they had would usually only come up when alcohol is involved. Akiva pointed out that Larry David, who wrote the episode, based this story off of a real life occurrence of his.

Jerry and Elaine decide to set some ground rules for venturing into their friends with benefits situation. First, they cannot call each other the day after “that”. Rob thought they could have set stricter guidelines to this, to avoid complication. Rule number two is that sleeping over is optional. The guys mentioned how this rule gets Jerry into trouble later in the episode, and noted how George told Jerry that he got “greedy” with this rule. The third rule is that there is no kissing goodnight. Akiva had a problem with this one. He thought it made it all seem more like a transaction. Rob wondered how it would work with dating someone else, but Akiva countered that dating others was not part of their deal. Rob questioned how this is any different than normal dating.

Jerry and Elaine finalize the rules and adjourn to the bedroom. The scene cuts to the next morning when Kramer comes into the apartment to find Elaine wearing Jerry’s shirt and sneakers, which Rob found quite weird for her to be wearing his sneakers. In the next scene, George and Jerry are at Monk’s, chit chatting about Aquaman when Jerry casually mentions that he had sex with Elaine last night. This floors George, saying he needs oxygen, then clamors for details. Jerry’s not in the mood to share the details, but George insists, telling Jerry he better get in the mood. Jerry recounts the situation, and George scoffs about the rules they set up, telling Jerry this has never been successfully done. He compares Jerry to a degenerate gambler thinking he can beat the casino at blackjack. He takes particular umbrage with the second rule, telling Jerry that no woman is ever going to want a man to leave after sex.

The next scene is Jerry and Elaine at Elaine’s apartment, where Jerry is eating Elaine’s roommate’s cake. Elaine is angry at Jerry for wanting to leave, since he has a root canal scheduled in the morning. Jerry mentions how he thought staying the night was optional, but Elaine tells him it’s her place, so it’s her option. After all is said and done, Elaine said she is “fine”, which Rob said is usually not the case when a woman says that. Elaine’s roommate, played by Siobhan Fallon, comes in talking about her improve class, which annoys Jerry. When Jerry is ready to leave, he leans in for a kiss goodnight, but Elaine, annoyed with Jerry tells him that it’s against their rules.

With Elaine’s birthday coming up, Jerry has a tricky time trying to figure out what to get her, considering their new situation. Akiva recommended that it’s always a good idea to start dating someone a while after their birthday, so that event doesn’t come up so new into a relationship. While at the store trying to figure out the present with George, Jerry is at a loss for what to get. Jerry mentions that he vaguely remembers Elaine talking about wanting a bench, but decides against it. George has a few ideas of what he will get Elaine, but Jerry strongly feels that George’s gift needs to be half of what Jerry gets. After rejecting several poor ideas they come up with, they decide to just worry about getting a card.

The next scene is back at Jerry’s apartment, and Elaine is opening Jerry’s gift. Rob pointed out how they actually wrapped the whole package, where many times in TV shows, only a part of it is wrapped, which bothers him. When Elaine opens the box, she sees that Jerry got her $182 ($318 in 2014 according to the inflation calculator) in cash. Bothered by this, she says “what are you my uncle?”. Akiva said he would be thrilled to get cash for his birthday. Next she reads the card, which Jerry writes, “to a wonderful girl, a great pal…and more”. Rob thought this was bad, that the more you say, the worse. He added that perhaps an inside joke, or something informal would be better.

Next, Kramer comes in with a poorly wrapped present, telling Elaine that he made a mental note of her mentioning this bench a while back. The card Kramer got her also had a nice poem he quoted. Jerry asks Kramer to give he and Elaine some time to talk. They both find it strange that as friends, they never fight, but here they are in their current situation, upset with each other. Elaine expresses that what she really wants is “this, that, and the other”. Back at Monk’s, Jerry and George ponder what it is about sex that ruins everything. George wonders if this all means that he won’t be friends with Elaine anymore. The scene ends with George saying he got Elaine $91, exactly half of what Jerry got her.

They start wondering how everything will play out with Elaine now. George thinks she will meet someone else, who they will ultimately have to murder, leading to them ending up in jail, which George can’t do, since he’d have to go to the bathroom in front of hundreds of people. Akiva and Rob discussed how neither of them enjoy a bathroom that is not securely private. Rob felt that it is worse to have the lack of bathroom privacy in front of a spouse versus some random person.

The last scene of the episode is back in Jerry’s apartment, and Kramer walks in to see Elaine there again. Rob was confused as to how they got back to this point, since Elaine said she was done with it all. When Kramer asks them what they will do today, they respond, “this, that and the other”. Both Akiva and Rob found this to be a cheesy, old-fashioned line. The episode ends with Kramer uttering the line “I liked you better when you weren’t a couple”. Akiva thought this tied into how NBC and Jerry felt about making Elaine and Jerry a couple, since that was a direction they did not want to take the show.

Newman special delivered the weekly Seinfeld mailbag for the guys to go through. An emailer Patrick mentioned that the cast all seem to really love plain garden salads. He wonders if New Yorkers have a tendency to eat salads more than the rest of America. Rob said he tends to eat a lot of salads, but just to avoid becoming a heavy person. Both Rob and Akiva agreed that eating a salad sans meat would be a no go.

Akiva’s buddy Chester chimed in with a few thoughts. He thinks that while the idea of friends with benefits is rather dated, the scene where Elaine’s roommate goes on and on about her improv class is actually more in tune with today than back then. He also mentions how Elaine’s roommate is a classic “that girl”, who is seen in several TV shows and movies, but not well known by name. Akiva pointed out how she was in Saturday Night Live for a season, and Rob remembered her as the bus driver in Forrest Gump. Next, Chester found it interesting how Elaine’s accusatory “you” about wanting this, that and the other is much like Manya’s accusatory “you” when Jerry asks who wouldn’t want a pony. Akiva enjoyed that callback. Lastly, Chester pointed out that George wanting to break up with Elaine by association conflicts with how they felt in the episode “The Ex-Girlfriend”.

Next week, Rob and Akiva are excited to breakdown “The Baby Shower”.  You can email questions and comments to[email protected].  Don’t forget to subscribe to the podcast on ITunes by going to postshowrecaps.com/Seinfeld.  You can follow them on Twitter @robcesternino and @keev26.

Special Thanks to Mike Moore for tonight’s episode recap! 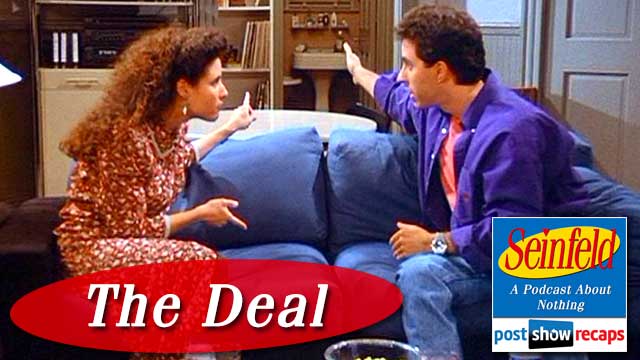