Rob Cesternino and Akiva Wienerkur continue their journey to watch every Seinfeld episode as they discuss Season 5, Episode 13, “The Dinner Party.”

Rob Cesternino and Akiva Wienerkur always look to the cookie, but never more so than in this week’s episode, as they recap “The Dinner Party”. The episode first aired February 3, 1994 as part of season five, and was written by Larry David.

There was no Seinfeld news this week, but Akiva did point out that the final ten episodes of season five might be his best stretch of episodes in the series run. He also recommended watching Nathan For You on Comedy Central, but will not pay the listeners as he did with Review.

Jerry’s opening standup is a bit about the moon landing, flimsily tying into the episode through a small part where George references it. The episode opens at Jerry’s apartment with Elaine complaining about someone saying “Happy New Year” in February, with Jerry concurring. Rob and Akiva agreed that Happy New Year should be out after January 10.

They continue to chit chat, talking about how cold it was. George walks in with a puffy Gore-Tex jacket that Elaine and Jerry make fun of, both slapping the puffy part back and forth. Elaine mentions they need to stop and pick up wine for the dinner party they’re all attending. George finds it foolish, adding most people would rather have Pepsi, causing Elaine to remind him they are grown ups.

The four are on their way to the dinner party, and Kramer’s heater isn’t working. George protests having to get a cake in addition to the wine, instead thinking they could just get some Ring Dings at the liquor store. After Kramer drops Elaine and Jerry at the bakery, he and George struggle to find a parking spot, so George suggests double parking. Kramer objects, not wanting to get anymore parking tickets.

At the bakery, Jerry notices a black and white cookie and goes on a diatribe about the racial equality the cookie brings. Jerry and Elaine forget to grab a number in line, and decide to ask the people who jumped ahead to switch numbers, but the couple is rude about it. Elaine realizes she knows them, and that they are going to the same party. Rob wondered why they didn’t just ask the couple to just also order their dessert for them, instead of switching tickets.

The couple’s number is called, and they order the very same chocolate babka Elaine wanted. When Elaine threatens to tell the party how rude they are, the woman points out they’ll be there first and tell everyone how rude Elaine is. Meanwhile, Kramer and George try to buy the wine, but the clerk won’t take George’s $100 bill. They go out to the newsstand to break the bill, but the newsstand guy makes George buy more than gum to do it, causing Kramer to pick out a newspaper, Clark bar and a Penthouse Forum Magazine.

Jerry and Elaine now have to pick a new dessert since the chocolate babka is now gone. They go with the lesser cinnamon babka, and it turns out it has a hair on it. They are forced to take a new number rather than swap it out. While they wait in line, Jerry eats his black and white cookie, going on about it’s symbolism. After paying for the wine, George and Kramer see that someone has double parked, blocking them in their spot. George can’t believe that they can put a man on the moon, but people are still stupid enough to double park and not leave a note.

Back at the bakery, Elaine is complaining that they are waiting for the new babka, but Jerry tells a traumatic story about freaking out and running for hours after finding a hair in his farina . As George and Kramer still wait for the double parker, George expresses how he’s scared to deal with Elaine, talking about how Elaine once pulled a hat down over his head when she was mad at him. Kramer can’t take the cold anymore, so they go back in the liquor store.

Elaine is continuing to complain about waiting, telling Jerry she’s going to wrap George’s hood of his big coat around his head and suffocate him. Jerry isn’t really listening, as the cookie has made him sick. He’s worried that his streak of not throwing up since 1980 will come to an end. He comments that there is civil unrest in his stomach. A guy with a cane presses it down on Elaine’s toe when he turned around, then gives a half hearted sorry. Jerry finally rushes to the bathroom to end his streak.

As George and Kramer wait in the liquor store, the clerk tells them they have to get out if they aren’t getting anything else. As they leave, George’s giant coat knocks over a bunch of bottles of wine, and he has to give up the coat to pay the clerk back. While outside, the double parker shows up, and it looks to George like Saddam Hussein, who tells them they should be wearing a coat. Rob remarked that it’s highly implausible that Saddam would be in America this shortly after the Gulf War.

Once George and Kramer get back to the bakery, Jerry wonders where George’s coat is, while George wonders why they didn’t get chocolate babka, causing a steely glare from Elaine. Finally, they all show up at the door of the dinner party, hand the wine and babka to them and turn around and leave. Jerry’s closing standup is a bit about how stupid looking the winter hats with flaps are.

In 2015, George could have used a debit card or Apple pay instead of having to break the $100, while Elaine could write a scathing Yelp review of the bakery and all their mishaps. Akiva enjoyed the deep narrative this episode, though the joke count might not have matched some of the greater ones, so he ranked it at 49. Rob thought it might be better suited in the 60-70 range.

There were several emails in Newman’s bag this week. First Dan the donator didn’t think having the charity lose money for shorter podcasts was necessary, but Rob wanted to commit to it. They are yet to decide exactly what charity to donate to. Elizabeth wrote in to comment about how much she liked Akiva’s story of taking his wife to the amusement park. She also noted her boss is a serial snacker who once pulled out a tuna sandwich from his briefcase to eat in a meeting. The food delivery correspondent wrote in to share that he frequently double parks when on delivery.

Johnny De Silveira wanted to know why Jerry and Elaine were so passive to not grab a number or get in line at the bakery. He also asked what Rob and Akiva’s favorite dessert is, adding his favorite is the scary Black Forrest cake. Akiva enjoys a strawberry shortcake. Mike emailed in mentioning he felt that Jane in “The Stall” wasn’t admitting to being the phone sex lady, but was just messing with Jerry and Kramer by telling Kramer not to call either, which blew Rob and Akiva’s minds.

Lastly, Chester wondered how all four got invites to a dinner party of Elaine’s friends. Akiva and Rob felt like anyone who knows them would assume they are a package deal, like in Entourage. He also asked why they drove, since it the dinner party appeared to be in Manhattan. Next, Chester tried to defend carrot cake, to which Rob and Akiva agreed, especially since you can fool yourself into thinking it’s healthy. Finally he pointed out the liquor store guy was a real jerk to kick out a paying customer, and how ridiculous it was to think Sadam Hussein would be living in New York City after the Gulf War.

Tune in next week as the guys will recap “The Marine Biologist”, where they will go for the hole in one. Send in your questions by emailing [email protected]. Don’t forget to subscribe to the podcast by going to postshowrecaps.com/ seinfeldITunes where you can rate and review the podcast. You can get a discussion going about the podcast by leaving a comment on the show page, and as always, you can follow them on Twitter @robcesternino and @keev26. 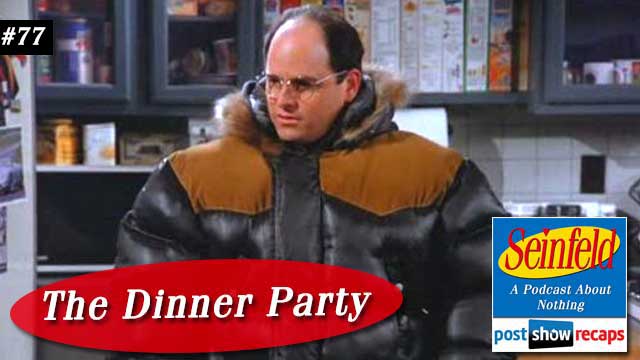