Rob Cesternino and Akiva Wienerkur are back and are pumped up to talk Seinfeld. Rob points out that Seinfeld has been in the pop culture zeitgeist this week because of the 25th anniversary of the pilot. By an unofficial count of 95% to 5% on listener feedback, Rob ensures that they will be “Masters of their Domain”, and go the distance by covering all 180 episodes (minus the montage episodes). They plan on still conducting the poll for the 25 best, and will note it in a recap if that episode makes the list.

Season 2 of Seinfeld started in January of 1991, which was a year and a half since the premiere of the pilot. It took NBC that long to air just the five episodes of season 1. Akiva mentioned how crazy it was for a show to get the second season pickup despite not being a standout.

In their overall thoughts of the episode, both Akiva and Rob felt that “The Ex-Girlfriend” was not one that either would be putting in their top 25 episodes. Akiva even felt this was bottom ten worthy. Rob enjoyed the main four characters, but felt the plot was lacking. Both thought that the storyline of this episode would have been tied back together in a creative way if it came later on in the series. Akiva points out that this was the first writing job for both Larry David and Jerry, so they may have been learning on the fly.

The episode starts off with Jerry and George in the car discussing how George wants to break up with his girlfriend, Marlene. As a side note, Akiva points out that the actress playing Marlene also plays a romantic interest of George later in the series in “The Soup”. George explains to Jerry how he was trapped into saying “I love you”, so breaking up will be that much harder. He would rather fake his kidnapping than face her. How George credits himself for being so nice to say I love you back to her is something Rob notices that each of the main characters does throughout the series. They all try to justify being a good person on the rare occasion they do nice things.

Elaine’s storyline has her talking about an acquaintance in her building that has gone from saying hello to her, to nodding, to no recognition at all. She wants to get to the bottom of it, and George encourages her to confront him. Akiva points out how ironic it is that George would never confront someone himself, but he champions the cause for Elaine to do so.

Kramer’s contribution to the episode is a flimsy storyline about fruit according to Rob and Akiva. Kramer tries to convince Jerry to return his bad cantaloupe, but Jerry feels that buying fruit is a gamble, and if it’s bad, then throw it out. Rob adds how the version of Kramer is roughly 90% of the polished version we see in later seasons. They haven’t given him any storylines yet of substance to highlight him.

Next, George comes in to tell the details of his breakup, which he compares to a prison break. He has a problem in that he left some books at her apartment that he wants back. He asks Jerry to arrange to pick them up for him. Rob feels like this is too tall a request to ask a friend. He doesn’t feel like there’s anyone he will go through that awkward a situation for. Akiva agrees with Jerry’s point from the episode that once you read the book, it’s worthless, going as far as telling the Recap listeners to throw out their old books.

When Jerry picks up the books, Marlene says that they should remain friends even though she’s broken up with George. Jerry awkwardly agrees, and then proceeds to get inundated with calls over the next several days. Though annoyed by her, Jerry tells Kramer he can’t resist her, eventually succumbing to her “sexiness”, and kissing her a little. Kramer assures Jerry that George won’t be mad at him, because it’s better that it’s a nice guy like Jerry going out with her as opposed to some other jerk, and George would want Jerry to be happy.

Another side plot that Akiva and Rob felt wasn’t tied together well was George’s visit to the chiropractor. It seemed to them as an opportunity for some standup material of Jerry’s about waiting rooms to be put on TV, though it did give us an enjoyable cheap George moment. The guys point out a couple more jokes on the show that had no real connection to the plot. Jerry and Elaine’s conversation about slow moving and fast moving elevators seemed like a weak segue into how Jerry will tell George about Marlene according to Rob.

The episode ends with Jerry telling George about Marlene at Monks. Rob and Akiva felt this scene to be a little clunky, with George granting Jerry permission to pursue her, but the ending of the scene with George swallowing a fly was a strange way to go out. Lastly, when Jerry tells Marlene they are free to date, she tells him no, because she saw his standup and wasn’t a fan. Akiva and Rob Both enjoyed Jerry’s standup at the end credits about what women want in men.

Rob and Akiva agreed that there wasn’t too much that would be different if the episode took place in 2014. Marlene would have YouTubed Jerry’s act, and learned about it being fluff before any dates. Jerry wouldn’t need to return the cantaloupe, he could just write a Yelp review. Instead of leaving Jerry bizarre messages, Marlene could have been texting and Facebooking Jerry all of her random thoughts.

Next week, the guys will recap “The Pony Remark”, that both agree is a legitimately funny episode, the first really memorable one for Rob, who watched the episodes as they aired back in 1991. Akiva felt that while it’s not quite top 25, it ranks up there with the better ones.

Subscribe to the Seinfeld Recap podcast on iTunes, and don’t forget to give your comments and feedback to help spread the word. 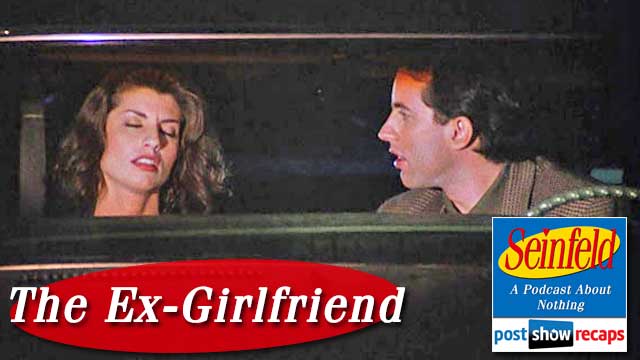