Rob and Akiva didn’t let the Labor Day Weekend stop them from recapping the eighth episode of season two titled “The Heart Attack”, which aired April 25, 1991. It was not a favorite of Rob, who felt that the “real” material they were dealing with in the episode was a bit too dark. He felt their niche is when they base the storyline around the mundane. He also mentioned that Larry David and Jerry usually have their finger on the pulse of these episodes they’ve loved so far, whereas the other writers early on tended to be in charge of the misses. Akiva added that later on in the series, Larry Charles and other writers really started to get it, penning some of the greatest stories of the series.

There were only a few research notes to be found on this episode by Akiva, who shared that Larry Charles got the idea for the episode from his own fear of aging. They took a moment to mention how Julia Louis-Dreyfus and Tim Whatley himself, Bryan Cranston brought some Seinfeld to the 2014 Emmys last week. Both Akiva and Rob found it too bad that Jason Alexander never won an Emmy for his portrayal of George Costanza, though he was nominated seven times.

The episode opens with Jerry performing a bit about how great it is to be a grown up, since he can have cookies anytime he wants. Akiva said he will regularly spoil his dinner if it’s not ready in time, but Rob keeps a regulated eating schedule. The first scene has Jerry awakened from a nap on his couch to a strange movie, which compels him to jot down a funny note from it. Rob mentioned how great it was to see another cameo from Larry David, who plays the character in the strange movie.

Next, at Monk’s Diner, George is slicing up a cucumber he brought with him. Akiva didn’t find it strange that he did this, pointing out that George is stubborn enough to do just that. Jerry and Elaine are trying to figure out what Jerry had written on the note he took while watching the movie. While they are talking, George starts to panic, thinking he’s having a heart attack. Jerry says to calm down, that he’s thinking about it because he watched a show called “Cardiac Country”.

At the hospital, which Rob noted was quite a long sequence, George is talking with another patient in his room, who tells him to shut up. Meanwhile, Jerry is trying to see if the nurse can figure out what his note says. Akiva and Rob found it funny that everyone who looks at the note thinks it says something, rather than just saying “I have no idea”. Next, the doctor comes in and tells Jerry that George didn’t have a heart attack, so Jerry decides to have some fun with it. He asks George if he can have his Blackhawks jacket and if he can date a woman George used to date. George asks Jerry to just put an end to it all, so Jerry puts a pillow over his face as a joke. When he lets George up, George calls him a jerk off. Both Akiva and Rob thought George saying that was a little racy for 1991, and were surprised it wasn’t edited.

When Elaine hears from Jerry that George is fine, she jokingly asks George for his apartment when he dies. The doctor comes in to talk with George, but Elaine is so taken with him, she flirts with him the whole time. The doctor tells George while his heart is fine, his tonsils grew back and needed to come out. Kramer comes in with a big plate of food, talking about how great the food is, like Sizzler opened a hospital. Rob shared Kramer’s love for hospital food when he was there with Nicole when she had the baby. Kramer then starts to alarm George about getting surgery. He mentions Bob Sacamano for the first time, describing how he had a botched surgery. He recommends George go holistic, and visit his friend Tor Eckman, played by perennial “that guy” Stephen Tobolowsky. Akiva felt that George’s decision to skip the western medicine was purely financial based.

The next scene is Tor Eckman’s apartment, where Jerry goes along with George for good joke material. Rob said that it really showed how little Jerry had to do with the episode plot, since he is just making snide remarks as Tor goes over his spiel. The scene cuts to Elaine and the doctor on a date, where he is holding Elaine’s tongue, telling her how it works medically. Rob and Akiva found this scene awkward and pointless. Back to Tor’s apartment, Jerry continues his wisecracks, though Tor is so crazy, he doesn’t respond to the sarcasm. Jerry tries to get Tor to read his note, but he reads it as a basketball score. Tor gets George to drink this concoction, which caused George to turn purple and need an ambulance back to the hospital.

While in the ambulance, the driver and the EMT in back are arguing over a box of Chuckles. The feud gets so bad that they pull the ambulance over to fight. The other EMT gets in to drive and promptly crashes it because he is arguing with Kramer and Jerry over leaving the other EMT in the street. Back at the hospital, George and Jerry are in neck braces from the crash. George had his tonsils removed, and Elaine brings the ice cream that George had been hoping for. When the patient next to him yells again for them to quiet down, George tosses the ice cream over the curtain at the guy. Jerry notices the strange movie that he got the joke idea from on the television, and finally solves his dilemma of what the note says (Flaming Globes of Sigmond). Akiva and Rob agreed with Jerry that it wasn’t funny, and noted that it would have made for a better story if Jerry never found out what the note said.

The closing standup has Jerry talking about how people who are hypochondriacs are always fine, but people who are really sick usually say they are great. Rob and Akiva said this joke had no basis, as we live in a society, especially now where most people are complainers, and never the opposite.

Both Rob and Akiva agree that while it’s not the worst, it’s nowhere near the best. Akiva’s buddy Chester provided some notes on the episode. He said that “The Heart Attack” was the first “prime” episode, thinking it the best of the thirteen so far. He also noted that Jerry must have been doing well with his stand up since he talked about Johnny Carson with such familiarity. Lastly, he pointed out that in later episodes, Estelle Costanza would have rushed to George’s side if he had a heart attack.

Join Rob and Akiva next week as they talk about a very important episode, “The Deal”.  Subscribe to Post Show Recaps on iTunes, and send your questions to [email protected].  You can leave a comment on thepostshowrecaps.com. Let Akiva and Rob know if you found the episode “sponge-worthy”.  You can follow Akiva on twitter @keev26, and Rob @robcesternino.

Special thanks to Mike Moore for this week’s episode recap! 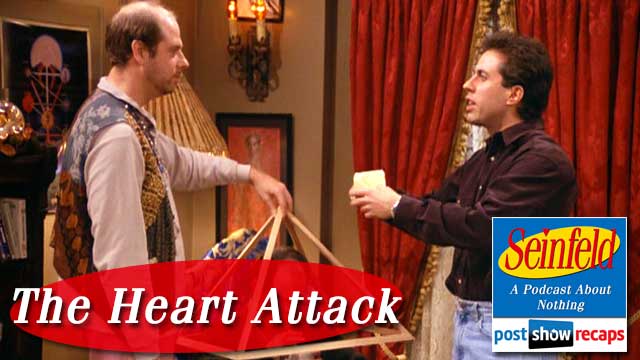