Rob Cesternino and Akiva Wienerkur continue their journey to watch every Seinfeld episode as they discuss Season 9, Episode 5, “The Junk Mail.”

Seinfeld Post Show Recaps: The Junk Mail
Rob Cesternino and Akiva Wienerkur’s Seinfeld Post Show Recap is like the mail, it can never be stopped. This time the guys discussed “The Junk Mail”, which first aired October 30, 1997 as part of season nine. The episode was written by Spike Feresten.
Jerry’s Storyline – Jerry old summer camp friend “Fragile” Frankie arranges for Jerry to get a car as payment for a spot he did for the dealership.  Frankie can only get him a van though, and Jerry has to pretend to like it to protect Frankie’s feelings.  He tries to discretely sell it in New Jersey, but Kramer convinces him to take out an ad and sell it himself.  Kramer tries to buy the van in “trade”, and while borrowing it, George decides to use it for his plan to shock his parents.  Ultimately Frankie learns Jerry doesn’t like the van, so Jerry has to find him in the Central Park woods digging a hole.  *Grade: Akiva – bill, Rob – past due bill
George’s Storyline – George notices his parents giving him the brush off, so when he confronts them on this, they tell him they are tired of him, and want some time to themselves.  George wants to do something to forces them back into his life, so he convinces his cousin Rhisa to pretend they are dating to shock Frank and Estelle, however the cousin is actually into the idea.  George persists with his plan, but when Frankie starts peering in the van windows while he and Rhisa are waiting Frank and Estelle, George freaks out, running into the woods.  The episode ends with George accidentally opening the van door to see his parents having sex.  Grade: Akiva – magazine+, Rob – paycheck
Elaine’s Storyline – Elaine becomes enamored with a man named Jack at the diner, so she sets up a date with him to see if he again gives her the butterflies.  When he does, she proceeds to dump Puddy.  Even Jerry gets an enamored feeling when he meets Jack, so he investigates to find out that Jack is actually from the old commercial for a famous electronic store “The Wiz”.  He delights in showing Elaine this, causing her to crawl back to Puddy.  She changes her mind again, only to have Jack share that he’s signed back on to be “The Wiz” again.   Grade: Akiva – IRS bill, Rob – IRS bill
Kramer’s storyline – Kramer is fed up with Pottery Barn delivering so many catalogs, so he decides to take all back to one of the stores.  When this doesn’t get them to stop, compounded with all the other catalogs being sent to him, he decides to take things further by cutting off the mail altogether.  Newman tries to interfere when Kramer makes a stink down at the post office, but Kramer doesn’t let up.  He starts picketing in an attempt to paint the post office as “big brother”.  This leads to the Postmaster General to kidnap Kramer and threaten him to continue getting his mail normally.  Grade: Akiva – bill, Rob – bill
Episode Ranking – 142
Emails – Johnny De Silveira asked what their “go-to” line is for getting off the phone.  Vicky noted that Newman’s speech is from a classic Robert Redford movie.  Mike C asked what businesses are the butt of the joke today like Pottery Barn was in the 90s.  Lindsay asked them to share their least favorite abbreviated word.  Jim the physics correspondent asked if they have any friends they have to baby like Fragile Frankie.  Matt wondered what the “choke point” was to stop Pottery Barn before taking on the Post Office.  Amir thought the most unbelievable storyline in the show was Kramer knowing who the Postmaster General was.  Finally, Chester chimed in with an array of takes, with Akiva sharing the news that he prefers to be called Alex.
Tune in next week as the guys will recap “The Merv Griffin Show”. Send in your questions by emailing[email protected]. Don’t forget to subscribe to the podcast by going topostshowrecaps.com/seinfelditunes where you can rate and review the podcast. You can get a discussion going by leaving a comment on the show pages, and as always, you can follow them on Twitter @robcesternino and @keev26.
*Grading: Bill = F, Catalog = C/D, Magazine = B, Paycheck = A 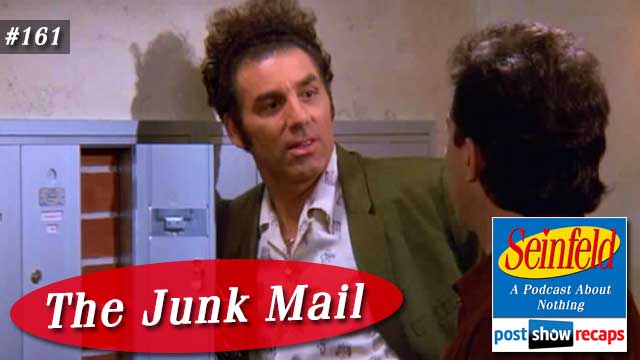