Rob Cesternino and Akiva Wienerkur were excited to sit down and discuss a classic episode from Season Three in “The Library”, which first aired on October 16, 1991. Akiva shared that this was the real first episode that tied all the storylines together, even though the same claim was made in four or five different episodes. Akiva felt that the powers that be at Seinfeld probably wanted a good episode to be remembered for that feat.

With no current news about Seinfeld, the guys jumped right into the recap. Jerry’s standup was about ventriloquist dummies. Rob thought that it was a bit meta to critique another type of comedy, and that it didn’t tie into anything from the plot of the show.

The episode opens with Jerry on the phone disputing that he still has a library book checked out from 1971. Both Akiva and Rob have had to shell out late fees for books, videos and DVDs in their past, but never faced the scrutiny of anyone like Lt. Bookman. Jerry explains that he distinctly remembers returning the book because he was with Sherry Becker, who wore an orange dress that showed “what she was working with” for the first time, which was burned into his memory.

Jerry brings Kramer along to the library to discuss this missing book, and he explains to Kramer that he was tracked down because of computers. Kramer shares his dislike for the whole library system, from the freeloaders reading newspapers on wooden posts, to the Dewey Decimal System being a sham. Rob and Akiva thought Kramer would be right at home with freeloaders given how he treats Jerry’s apartment like a library.

At the library, Kramer shows off his prowess as a ladies man when analyzing the librarian as a lonely spinster in need of “a little Kramer”. Jerry makes a low blow comment about how she’d need penicillin after a meeting with him. Akiva and Rob noted that Kramer’s ignoring the comment is a typical sitcom move that would never happen in real life. When they finally get to talk to the librarian, she informs them that the case has been turned over to the library detective named Lt. Bookman. Rob and Akiva quibble a bit over whether it’s a good joke to have him named Bookman, and decided that they were being too nitpicky.

George meets up with them, and he’s frantic about seeing a homeless man who he thinks is their 9th grade Gym teacher, Mr. Heyman. They tell the story to Kramer about how George got him fired for giving him a wedgie, to which Kramer remarks how he didn’t take George for a squealer. As they go to leave, Kramer stays around to flirt with the librarian, asking her what’s a guy to do to get a library card around there.

Before recapping the Elaine story, Rob shared how disappointed he was in this storyline. Akiva felt it could be given a pass because it developed Lippman as a recurring character, even though they would switch the actor out after this episode. Elaine is at her office, where she is worried that she is in trouble since no one got her order for lunch. Mr. Lippman then gives her a lukewarm response to her question about a story she edited.

At Monk’s, she is worrying about the happenings at her office, and tries to get George to commiserate, since he’s worked in an office. George is transfixed with the Heyman siting, so he completely blows her off by saying “I don’t know about lunch, I don’t know about anything”. George shares with Elaine about how their Gym teacher used to torment him, making him smell his own socks and wear a jock strap on his head the whole class. George then describes the story of the wedgie, and we see a flashback of the event. Mr. Heyman walks up to George and calls him “Cantstandya”. He remarks that George’s underwear is showing, and has a group of students then give him the wedgie. Rob referred to these students as Heyman’s henchmen.

Jerry has a mid episode standup about how libraries are like a pathetic friend. The next scene has Lt. Bookman waiting to talk to Jerry at his apartment. Both Rob and Akiva felt that this character was wonderful. They debated the value of this small library having a detective on salary to solely track down overdue books. Rob shared that writer Larry Charles wanted to have the character be like a tough talking cop similar to shows like Dragnet. Bookman lays into Jerry about his abuse of the library rules, and how “party time is over”. After Bookman storms out of the apartment, the librarian, who has met up with Kramer, scurries into Kramer’s apartment to not be seen.

Jerry decides to meet up with Sherry Becker to get her take on the lost book. Akiva and Rob pointed out that the actor who played Sherry was far older than Jerry. Akiva learned from some Facebook stalking that the actress playing Sherry Becker, Cynthia Szigeti, much like many of the bit characters on Seinfeld, is currently an acting coach. Sherry shares with Jerry her memory of that day. She remembers that she was wearing a purple dress, was chewing Dentyne, not the Black Jack licorice gum, and that they were reading Tropic of Capricorn, not Tropic of Cancer. Jerry then realizes that he gave Tropic of Cancer to George to read.

Meanwhile, Kramer and Marion the librarian are reading her poetry in the library after closing, and they are busted by Lt. Bookman. He tells Marion that he remembers when the librarian was an older woman who you knew nothing about, and he liked it that way. He tells her that this is her last warning about violating the library rules.

Back at Jerry’s apartment, Elaine is describing how Mr. Lippman wants to see her in his office, and she’s worried that he doesn’t like the book about Columbus. Rob enjoyed how Jerry referred to Columbus as Euro-trash, but wondered why there was not a scene that tied in how Elaine brought Marion’s book of poetry in to Lippman. George then walks in, sharing that the homeless man was definitely Mr. Heyman. He had approached Heyman, asking if he remembered him. As he turned away, Heyman gave George a wedgie. Elaine remarks that at least it wasn’t an atomic wedgie, to which George reveals the shredded, tighty-whitey band, proving it was. Jerry informs George that he was the one with the lost book.

Jerry goes down to the library to write a check to Bookman for the lost book. Elaine, who is with him, shares that Mr. Lippman did not like Marion’s book of poems. Rob particularly liked how she delivered the line “no, he did not”. The final scene cuts to Mr. Heyman in his cardboard box repeatedly saying “Cantstandya”. The camera pans out on the lost copy of Tropic of Cancer. Jerry’s closing standup is a bit about how strange gym class is in context to the rest of the school day.

When they discussed what from the episode would be different in 2014, they decided that a teacher would certainly be arrested for allowing a student to get a wedgie, and that the overdue book investigation would have taken a lot less than 20 years to track down Jerry.

Newman delivered a fresh mailbag for them to go through. Hunter, along with many other listeners, pointed out that Prancer was an actual movie released in 1989. An email from Johnny De Silveira shared how he feels for George about having his name mispronounced and misspelled. He asked Bob Sesterino and Ikea Weinerker if they have experienced the same. Both shared the many ways their names have been butchered over the years.

Emailer Chester had issues with the Elaine “B story” and the imposter Lippman. Rob agreed, feeling it takes the episode from a 9 rating to an 8. Akiva took the opportunity to unveil his rankings of the episodes so far. There are 169 episodes to rank when combining two part episodes and removing the highlights. The bottom 16 episodes are completely made up of shows from seasons one, two and three.

Tune in next week as Rob and Akiva breakdown “The Parking Garage”. You can subscribe to the podcast on ITunes by going to postshowrecaps.com/SeinfeldITunes, where you can also rate and review the podcast. Apple users can now download the RHAP app, which includes all Post Show Recap and Reality TV RHAP-ups too. Send your emails to [email protected], and follow them both on twitter @robcesternino and @keev26.

Special thanks to Mike Moore for this podcast recap! 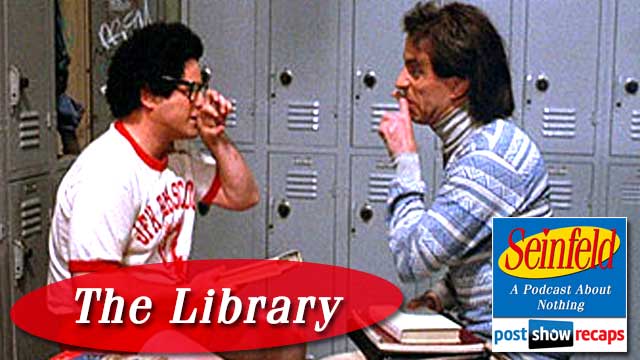