Rob Cesternino and Akiva Wienerkur continue their journey to watch every Seinfeld episode as they discuss Season 5, Episode 6, “The Lip Reader.”

Rob Cesternino and Akiva Wienerkur lost out on their opportunities to be the next great ball men at the US Open, but that didn’t stop them from bringing you the latest Seinfeld episode recap. This week they break down “The Lip Reader”, which first aired October 28, 1993 as part of season five. The episode was written by Carol Leifer, who would be a part of the writing team for the next few seasons.

Akiva had a few bits of Seinfeld news to share this week. First, the New York Post ran an article about how more people think that a cure for cancer would come sooner than reruns of Seinfeld stop airing on TV. Also, Jason Alexander will be joining the cast of the new Fox sitcom The Grinder, starring Fred Savage and Rob Lowe.

Rob presented Akiva with this week’s Seinfeld Scene It question, to which Akiva had no trouble extending his win streak, bringing his record to 7-5.

Jerry’s opening standup is a bit about tennis, and how strange the shushing and scoring are. The episode opens with Jerry and George at the US Open, with Jerry transfixed on an attractive woman line judge. George referred to her as a BL (beautiful lineswoman). Jerry thought he might just go up and talk to her, but George advised against such a bold move, not wanting Jerry to leave him and the others who wouldn’t approach a woman cold.

George asks if Jerry is going to Todd’s party, as he is bringing a date. Jerry advised against bringing a date, saying he’s better off to mingle. Rob and Akiva debated the best way to attend a party, though both agreed they’re not big party goers. Meanwhile, Elaine is at work discussing how she doesn’t want to take a care service, since they talk her ear off the whole trip.

After the match ends, George heads for the snack bar while Jerry walks up to Laura the lineswoman. Kramer is watching the tennis match at Jerry’s, and sees the camera pan in on George eating a banana split, with the ice cream smeared all over his face. Elaine took the car service, and the driver will not stop talking, so much so that Elaine feigns losing her hearing. She blows her cover when she overhears that Tom Hanks will be the driver’s next pick up.

Back to Jerry, he tries talking to the lineswoman, though she doesn’t acknowledge him at first. When he gets mad and sarcastically asks if she’s deaf, she responds with “bingo”. Later he’s back at his apartment telling Kramer about meeting the deaf woman, learning that Kramer knows sign language. Elaine starts talking about what she can do to make it up to the car service driver, and Kramer recommends she get him concert tickets from his friend Pete who can get a deal. Akiva noted that nowadays people are spoiled, so giving something like tickets doesn’t go over well.

Kramer asks Jerry to talk to Laura to see if she can line him up with a chance to be one of the ball boys. Akiva asked Rob if he’d be a ball boy, and he would not. Akiva also shared that he turned down a chance to be a ball boy for the Miami Heat because of his dislike for Pat Riley teams. Elaine mentions how a friend saw George on TV, to which Kramer confirms that they showed him with ice cream all over his face.

In the next scene, George is at the diner with his girlfriend, who is breaking up with him. She gives him the “it’s not you, it’s me” line, and George admonishes her for using his line to break up, berating her to admit that it was in fact him at fault. Back at Jerry’s, George explains what happened with Gwen the ex girlfriend, and realizes that the ice cream incident may have caused it, since he would break up with someone for that. Akiva thought that this would have to be the reason she broke it off, though the episode didn’t indicate. Elaine asks George if he’s still going to Todd’s party, since Gwen will be there, thinking that since she broke it off, he should stay home. Jerry disagrees, thinking that George needs to go since he was dumped.

George tags along with Jerry and Laura to dinner, where Laura shows that she can read lips of people across the room. George gets the great idea to bring her to the party to spy on Gwen and see if she says anything about him. He and Jerry find various ways to cover their mouth to make this plan, but she notices, and agrees to do it.

After dinner in the car, Jerry asks if six o’clock is a good time to pick her up, but she mistakes him for asking for sex. The scene cuts to Kramer trying out with the ball boys, and he is crushing it. Later on, Jerry is explaining this to George, who is worried she will make the same mistake when reading Gwen’s lips. Akiva asked Rob if he’d have a good reason to use a lip reader, but Rob didn’t, and neither did Akiva. Newman comes in begging to use Laura to find out what his boss is saying about him, though Jerry shoots him down vehemently.

On their way to Todd’s party, the driver is hard of hearing from going to the concert Elaine got him tickets for. When they stop to pick up Elaine, he recognizes her and immediately kicks them all out. At the party, Kramer and Laura are signing back and forth, clearing showing that Kramer doesn’t know what he’s doing, though he blames Laura. Todd comes over to chat with George, warning him that he can’t betray Gwen’s confidence about the breakup.

When Gwen comes over to Todd, the spy operation starts. Laura is watching them talk, while Kramer is interpreting her signing to George. When Todd asks Gwen to stick around after the party to sweep with him, Laura sees it as “sleep”. George barges over to confront them, but leaves embarrassed when he learns they were saying sweep. Rob believed that Todd was trying to make something happen by asking her to stick around.

In the next scene, Kramer is the ball boy at tennis great Monica Seles’ match. In his first opportunity to get a ball, he runs right into her as she was approaching the net. Akiva noted that Monica Seles had famously been stabbed on court by a crazed fan not long before this. Jerry, who was watching this, says the great ball man experiment is over. The episode ends with Laura getting into the guy from the car service’s car and telling him she’s deaf.

Akiva definitely felt it was much better than “The Bris”, and ranked it at 60. The only thing from the episode that wouldn’t work in 2015 is that they could just take an Uber. Akiva did have tweets of the week from @jewerstein who said “Jealous of deaf people, because they never get asked to listen to their friend’s podcast. Also, @ClevelandIndians replied when asked Friends or Seinfeld, “you obviously don’t follow us closely, it’s Seinfeld by five miles”.

There were a couple emails this week. Johnny De Silveira asked what’s the best way to get around New York. Akiva doesn’t remember how to ride a bike, so his preferred method is cabs. Tom the medical correspondent, noted he love to talk about the Pigman, but is sworn to secrecy. Amir asks why George would consider Jerry a normal guy instead of a woman approacher, when clearly Jerry has had no trouble talking to women throughout the series. He also asks how on earth the same driver would be in every car service they order. Rob and Akiva agreed with the plot hole.

Chester closes it out with a comment about how Larry David bought a freak book on Curb Your Enthusiasm, and comparing George’s claim to have invented “it’s not you it’s me” with Richard Lewis’ claim to have invented “the blank from hell”. He also notes that he has a friend who is a US Open ballman who has been doing it since college.

Tune in next week as the guys will recap “The Non-Fat Yogurt”, where their hope is for it to be so #$%^ing good. Send in your questions by emailing [email protected]. Don’t forget to subscribe to the podcast by going to postshowrecaps.com/seinfeldITunes where you can rate and review the podcast. You can get a discussion going about the podcast by leaving a comment on the show page, and as always, you can follow them on Twitter @robcesternino and @keev26.

Thanks to Mike Moore for this episode recap. 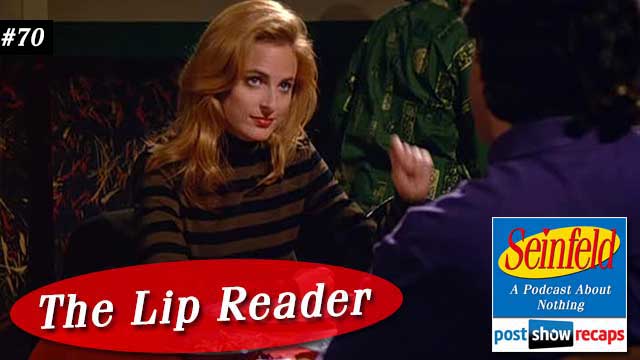