Rob Cesternino and Akiva Wienerkur continue their journey to watch every Seinfeld episode as they discuss the start of Season 3 with “The Note”.

After an up and down season two, Rob and Akiva got some massages (with notes for their insurance to cover of course), a new microphone for Akiva, so they’re primed to dive into Seinfeld’s third season. They start off with the first episode of season three, the 18th they have covered so far, called “The Note”, which first aired September 18, 1991.

Rob felt that this episode was the first to really have the Seinfeld feel. Akiva agreed it did, even though it wasn’t a great episode. He added that he really felt the Kramer we’ve come to know and love officially took form here. Rob called it a racy episode for 1991. Akiva felt it was more controversial now, since the premise deals with homophobia, and can be viewed as politically incorrect. Rob thought Jerry did a good job in his stand up during the closing credits quelling the notion of having a negative view on homosexuality.

They had a few notes pertaining to Seinfeld in the news in 2014. Akiva read something about Jason Alexander sharing how his son is dating an architect, referring to it as a brutal irony in his life. Also, Jerry recently won a Clio award for advertising. In his speech, he tore into the whole premise of advertising and it’s materialism.

Jerry’s opening standup was a bit about people referring doctors, and how they always feel they are the best. Akiva thought this was the best standup shown so far. Rob and Akiva said that the enhanced “scat music” version of the theme song was weird and obnoxious. This change would only last for this episode, as NBC pulled the plug on it right away. The episode begins with Jerry getting a massage, saying creepy things about kidnapped kids to the lady Juliana giving the massage, who is obviously put off and alarmed by this. Akiva and Rob thought this was weird and not fitting to Jerry’s character.

In the next scene at Jerry’s apartment, he is explaining how he offended the masseuse to George and Elaine, but they don’t seem interested in the story. George just complains about Jerry’s empty fridge, while Elaine keeps trying to change the subject. What does end up peaking their interest is when Jerry explains that he is getting this massage covered by his insurance by getting a note from his friend who is a dentist (not Tim Whatley).

George and Elaine decide to utilize this loophole and get themselves free massages as well. When they get there, George learns that he will be getting his massage from a man, which makes him immediately uncomfortable. He asks Elaine to switch, but she doesn’t want a man massaging her either. Rob shared a story about getting a massage from a man when he was in Argentina after Survivor: All Stars. The experience made him think about this very episode, but due to the language barrier, he had no option to ask for a lady instead.

George has no choice but to get the massage from Raymond, the tall, attractive, male masseuse. Akiva wondered why George wouldn’t just leave, but Rob noted that he wasn’t going to give up a free massage. As George is getting the massage, Raymond comments how he seems so tense, which George explains was from too much coffee. He’s visibly nervous, giving muttered, nonsensical answers to Raymond’s questions. When he walks out after the massage, George just slinks out past Elaine without a word.

Rob and Akiva were delighted with the next scene, calling it a classic. Back at Jerry’s apartment, George starts to explain what happened. George gets to the part about having to take his pants off, and how Raymond got two inches from “there”, which made “it move”. He and Jerry debate whether that means he has a sexual attraction to a man because of this. Akiva and Rob extended the debate themselves, and they concluded that it would take much more than that situation to determine.

Kramer walks in and blurts out that he just saw Joe DiMaggio at Dinky Doughnuts. They also wondered why they wouldn’t just call it Dunkin’ Donuts, since they refer to real products like Snapple and Junior Mints throughout the series. During Kramer’s story, George keeps talking to himself about how situations where he’s close to other men, like in a public bathroom, make him uncomfortable. Rob and Akiva discussed how it’s a common thing on Seinfeld for one character to completely ignore a side conversation and just focus on their issue. Jerry assures Kramer that it wasn’t Joe DiMaggio at Dinky Doughnuts, and George finally takes part, adding, why would Joe DiMaggio be eating at a crummy Dinky Doughnuts when he’s a guy who’s slept with Marilyn Monroe. George ends the conversation by asking Jerry to take him to Roy the dentist for the insurance note.

While at the dentist getting the note, Roy the dentist comments on a poster of Evander Holyfield, and how he has a great body. George immediately takes offense, wondering why Roy would think George would be looking at his body. While Roy is writing up the notes, Jerry has him write another one for Elaine.

Back at Jerry’s apartment, he is on the phone trying to schedule another appointment, but Juliana isn’t taking an appointment with him. Kramer comes back in saying that he saw Joe DiMaggio again at Dinky Doughnuts. Rob mentioned how this is the first celebrity that is referenced on the show that never actually appears on screen. Kramer observes him, noting that Joe likes to dunk his doughnut. Akiva had never heard of dunking a doughnut in coffee, but Rob explained that is why it’s named Dunkin’ Donuts. Kramer continues his story about Joe D, and how he was trying to get his attention by slapping the table and making strange whooping sounds.

George comes in and starts explaining why he has ripped pants. While jumping over a puddle, he made an effeminate motion, which caused some kids to call him a “Mary”. He fell and ripped his pants falling while chasing after the kids. Jerry meanwhile gets a telephone call from Roy, who explained that he is being investigated for insurance fraud from writing all the notes for the massages. They go to Roy’s office, and the receptionist, who’s Roy’s wife, berates them for putting Roy’s practice in trouble with these notes. Roy assures them that as long as the physical therapist who gave the massage “play’s ball”, nothing bad will happen.

When Jerry and George go back to the massage office to make sure all will be okay, the front desk tells them that Juliana is not there, though she walks out of an office with her son. When Jerry tries to talk to her, she yells for her son Billy to run into the back room and call the police. Akiva noted that the boy playing Billy is Jerry’s real life nephew.

The next scene cuts to the coffee shop, where Jerry shares that Roy will only end up getting six month’s probation for the infraction. George tells them that he has been having men show up in his sexual fantasies. He has to yell at them and tell them to get out of there. Rob said that this is definitely a dated problem, since technology in 2014 would allow for someone to utilize the internet for such things versus having to use one’s imagination to fantasize. While talking, they look over at another table and notice Joe DiMaggio. Kramer starts slapping the table and yelping again to try and get his attention. The closing credits standup is Jerry talking about how male homophobia could be due to how easily men are persuaded to buy things.

The guys discussed what would be different in 2014, but concluded that most of the storyline would still be the same today.

There were a few emails to go over with the start of season three. Chester pointed out that the massages seemed more like haircuts, and not what typically happens in a massage. He also wondered why George wouldn’t be asked if he preferred a man or a woman. Johnny asked if Akiva and Rob have seen any retired Mets players out and about. Akiva has a friend who knows David Wright, and Rob rode a plane with Todd Zeile, but didn’t talk to him. Rob would love to run into Keith Hernandez though.

Next week, the guys will recap “The Truth”, and will do so on a bit of a different schedule, so get your emails in before Wednesdays at [email protected].  You can subscribe to the podcast by going to the website atpostshowrecaps.com/seinfelditunes.  And as always, you can follow them both on twitter @robcesternino and @keev26.

Special Thanks to Mike Moore for this episode’s recap 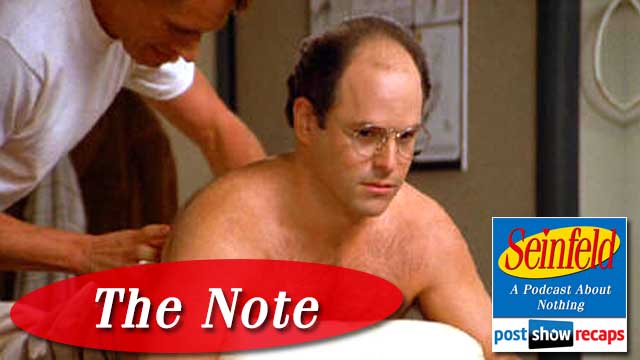