Rob Cesternino and Akiva Wienerkur continue their journey to watch every Seinfeld episode as they discuss Season 4, Episode 13, “The Pick.”

Rob Cesternino and Akiva Wienerkur made sure not to miss any buttons as they convened to recap the next episode in the Seinfeld series. This time, they talked about “The Pick”, which first aired December 16, 1992 as part of season four.

The guys spent a lengthy amount of time discussing an idea for a Back to the Future reboot before getting into the Seinfeld news, and went on several tangents throughout the podcast as well. They have cast Anna Kendrick in the Marty McFly role and bandied about several names to fill the Doc Brown role, including Chris Tucker, Peter Dinklage and Zach Galifianakis.

There was a little bit of news this week. Wednesday, June 24th will be the day Seinfeld comes to Hulu. Also, Julia Louis-Dreyfus and Jerry Seinfeld participated in David Letterman’s final Top 10 list on The Late Show. Rob noted that next week’s episode will drop right around the one year anniversary of the podcast.

Jerry does a standup bit about modeling and how they tend to overshadow the product being sold. The episode opens with George at Jerry’s apartment lamenting his breakup with Susan. Jerry and Elaine remind him that he didn’t even like her when they were together. While George talks about how he’ll spend the rest of his life in his disgusting apartment with no underwear, Elaine suggests seeing a psychiatrist to help.

Elaine notices Jerry got a Christmas card from the model Tia with her photo on it, which prompts her to want to do the same thing when Kramer offers to take the picture for her. Elaine talks about her religious boyfriend, which Rob and Akiva believed was only added to the script as a precursor to him admonishing her for the nipple picture. Rob also noted another useless storyline where Kramer is obsessed about Jerry’s cereal selection. The scene wraps with George singing a sad song, to which Jerry tells him it’s time to go.

In the next scene, Jerry is at his apartment with Tia talking about getting a tropical fish tank when he notices her perfume smells a lot like Kramer’s idea of The Beach. When Kramer comes in for a dust buster, Jerry does his best to keep them separated, but can’t keep Kramer from recognizing the smell. It takes him a few beats to notice, but when he does he is incensed, thinking he missed out on being a fragrance mogul.

George decides to meet with Elaine’s psychiatrist friend, however he can’t get through the session because he’s obsessed with getting his jacket zipper unstuck. Meanwhile, Elaine is showing Jerry her Christmas card she had Kramer do when he notices that her nipple is showing, leaving her mortified. They show it to Kramer, who does a double take, and Jerry ultimately decides that they need Newman to determine if the nipple is that easy to see. Newman pops in, points out the nipple and leaves.

The psychiatrist is now trying to help George with the zipper, and she gets so aggravated by it, she abruptly ends the session. In the next scene, Jerry is in his car scratching the side of his nose. Tia is in a cab next to him, and from her angle it looks as though he’s picking deep in his nose. Her cab drives off with Tia looking disgusted, with Jerry screaming “it was not a pick!”.

Back at Jerry’s apartment, he is telling George about Tia thinking he picked his nose. George tells him it’s not a big deal, but says he’d never date a woman if he caught her doing that. He added that Moses probably picked, since he wandered the desert with that dry air. Elaine comes in complaining about her coworkers calling her “Nip” now that they’ve seen the Christmas card. George tries to complain to Elaine about not being on her Christmas card list, and she shoves his face into her chest, saying “here’s your Christmas card”. Rob called it the joke of the episode.

Kramer comes back in for more cereal and notices that Elaine is wearing his scent. When Jerry calls Tia’s agency to track her down, they learn she’s at the Calvin Klein offices. They all decide to head down there, Jerry to shame Tia for bailing on him and Kramer to argue with Calvin Klein about stealing his fragrance.

In the next scene, George is meeting with Susan at the diner, trying to convince her to take him back. He goes on about how he’s a rock, he can change. He talks about how Louis Pasteur and his wife supported each other without having anything in common, and they could be like them. Susan ultimately agrees to take him back.

Out in the lobby at Calvin Klein, Jerry confronts Tia about ducking his phone calls, causing quite the scene. Next we see Elaine, where she is defending herself to her religious boyfriend over the nipple picture, telling him he’s the one who’s exposed his true self. Another cut to George and Susan walking up to her apartment, where George is immediately dreading his choice to get back with Susan. Back at Calvin Klein, Kramer is modeling for Calvin and some other employees in his underwear, intriguing them with his look. Out in the lobby, Jerry continues with his rant defending himself and all other pickers out there.

The episode closes at the diner, where George tells them he really made a mistake getting back with Susan, but got out of it all by letting her catch him picking his nose. Kramer comes in with a magazine to show his photo that Calvin Klein took. Elaine points out that she thinks she can see his nether regions.

In 2015, the episode would mostly hold up. The turnaround time on the Christmas card would be much shorter in the digital world, but other than that, Akiva couldn’t think of anything. In ranking the episode, he felt it was quite a good one, putting it at 33. Rob agreed, adding that there were a good amount of laughs even in the side stories.

Newman dropped off a bit of mail for them to go through this week. Amir chimed in to point out that it was implausible that Elaine wouldn’t send George a Christmas card. He also wondered why Kramer wouldn’t call Jackie Childs right when he first smelled The Ocean. Johnny De Silveira emailed in with some notes. First, George’s psychiatrist will appear again two more times throughout the series. He also said that the episode was indeed supposed to be called “The Nipple”. Ryan McCleod wanted to point out that Newman will later be in love with Elaine, but he seemed unfazed by looking at Elaine’s nipple.

Tune in next week as the guys will recap “The Movie”, where they’ll decide whether they’d rather see Rochelle, Rochelle or Checkmate. Send in your questions by emailing [email protected]ps.com .  Don’t forget to subscribe to the podcast by going to postshowrecaps.com/seinfeldITunes where you can rate and review the podcast.  And as always, you can follow them on twitter @robcesternino and @keev26. 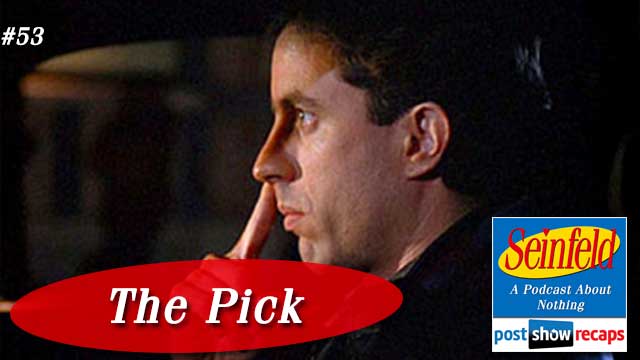