Rob Cesternino and Akiva Wienerkur continue their journey to watch every Seinfeld episode as they discuss Season 4, Episodes 3 & 4, “The Pitch” and “The Ticket.”

Rob Cesternino and Akiva Wienerkur aren’t getting Ted Danson money, but they are ready for a second double recap in as many weeks as they continue on covering the Seinfeld series. This time, they’ll break down “The Pitch” and “The Ticket”, which both first aired September 16, 1992 as part of season four.

Akiva shared some Seinfeld news before delving into the episode. There was an article in the New York Post about another lost episode that was pulled by NBC for some jokes about race that were deemed controversial.

Jerry’s opening standup was a bit about Colonial Williamsburg that Rob noted had nothing to do with the episode premise. The episode opens at a comedy club with Jerry and George talking about toilet paper in historical times. As they are talking, two executives from NBC approach Jerry about their interest in having him develop a sitcom.

The next day, George is suggesting several ideas to Jerry for what the show could be, like Jerry as a gymnastics coach or an antique store owner. Kramer suggests he do a show about circus freaks. Newman comes in to trade his helmet for Kramer’s radar detector. When Jerry points out that Kramer is getting the short end of the deal, Kramer tells Jerry the detector didn’t work anyway.

Jerry and George go to Monks, still discussing ideas for the show. During a random conversation about salsa, it occurs to George that this type of mundane talking should be the premise of his show, a show about nothing. George thinks there could be characters based on them, Kramer and Elaine. At first Jerry’s not buying it, but starts to warm to the idea as the discussion unfolds. When Jerry talks with Kramer about the idea, Kramer balks, saying he’d only approve a Kramer character if he can play himself. Rob and Akiva mentioned how the real life Kramer must have felt apprehensive about a character based on him since they referred to Kramer as Kessler in the pilot episode.

While talking about the show idea, Newman comes in and tells Kramer the radar detector didn’t work and he got a ticket, and now he’ll have bad karma for trading a worthless item. Jerry and George are waiting In the lobby at NBC, and George starts to get very nervous for the impending meeting. While they are waiting, Jerry notices “Crazy” Joe Devola in the hallway. During an awkward conversation, Jerry accidentally mentions Kramer’s party, learning that Devola wasn’t actually invited.

At the pitch meeting, things are going well. George makes up that he wrote La Cosina as a way to prove that he belongs there. Jerry doesn’t miss the opportunity to further inquire about this, throwing him under the bus. As Jerry describes their idea to the executives, George takes over the conversation, turning belligerent about the “nothing” idea when they question it. Back at Monks, Jerry lays into George about how it would take a team of psychiatrists to fix whatever is wrong with him. As an aside, George mentions how he found the woman executive Susan attractive, further incensing Jerry.

The next scene is Elaine in Europe with her psychiatrist/boyfriend, who is thinking about a patient (Joe Devola) who might be without his medication. Akiva mentioned how these scenes with Elaine were thrown in since Julia Louis-Dreyfus was on hiatus for maternity leave. Back at Jerry’s apartment, Jerry tells Kramer about his slip to Devola, instantly alarming Kramer. George comes in with Susan, who is almost immediately thrown up on by Kramer after he drank expired milk.

At Monks, Jerry and George are discussing how the show must be dead now that Kramer has thrown up on Susan. Kramer comes in wearing the helmet, which has a dent in it. He shares how Crazy Joe Devola ran up and kicked him in the head saying “that’s what I think of your party”. Kramer tells Jerry that Devola said Jerry’s next. The end of “The Pitch” is a standup bit from Jerry about how there is no greeting card to apologize for throwing up on someone. Rob and Akiva debated the etiquette in how long to keep a greeting card after getting one.

“The Ticket” begins with Jerry in his apartment, and Kramer walks in with one pant leg off. George comes in and hands Kramer a dry cleaning bill for throwing up on Susan. Kramer yells out “Yo Yo Ma”, then answers the phone in Italian, prompting Jerry to make him go to the doctor for the kick to the head. The phone call was from NBC, who wants a follow up meeting.

As Jerry and George are on their way to NBC, Jerry notices his watch isn’t working, so he throws it in the garbage. As he does this, Uncle Leo walks up to them with a long story that Jerry has to cut off to make the meeting. As Leo walks away, he notices the watch in the garbage and puts it on. Meanwhile, Newman is going over the cover story with Kramer for fighting the ticket he received, since Newman told the cop that he was racing home to save his friend that was going to commit suicide.

In the next scene, Newman and Kramer are in court fighting the ticket. Rob shared that he feels Newman is the one character on the show that embraces that he’s a bad person, where the main four characters at least try to pretend that they have good intentions. Back at the meeting, Russell, the main executive, is asking to see a copy of La Cosina, but George makes up a story about how it was lost in a move. Russell tells them that they want to go ahead with the show, all thanks to Susan’s encouragement.

As they leave the meeting, Jerry is told that he has a phone call, which turns out to be his mother calling to yell at him for being rude to Uncle Leo. Susan comes out of the room to congratulate them, and George offers her the money for the dry cleaning. When she takes the money, George can’t believe it, thinking she should have declined. In the next scene at Monks, they learn that NBC’s offer is $13,000, well below the $50,000 that George was thinking they’d be offered, insulted further since it isn’t close to Ted Danson money. Rob and Akiva thought that $13,000 might be a bit low nowadays, but even an offer of zero up front would be acceptable at the thought of getting a show on the air.

Still at the coffee shop, Jerry thinks he sees Joe Devola outside waiting for them. He notices a police officer at the counter, and asks him to escort him out to a cab. The cop wanted to grab a muffin first, but Jerry notices him ordering a sandwich off the menu instead. Both Jerry and George point out separately that a muffin could be very filling.

Back in court with Newman and Kramer, Kramer is on the witness stand recounting his story. When he starts to butcher the story, Newman goes far out of his way to lead Kramer through the lie, though it fails miserably, and the judge orders Newman to pay the $75. Still waiting for the cop at Monks, Jerry is getting more agitated, and calls him out when the cop orders coffee after the sandwich. Newman and Kramer come in after court, and the cop who Jerry was waiting for goes right out and writes Newman a parking ticket. The episode wraps up with a standup bit about going to traffic school.

In 2015, a few things would be different in this episode. Akiva felt that the psychiatrist would be able to call in Joe Devola’s prescription from Europe with no problem, and Kramer’s concussion would have been treated more seriously. He also noted earlier in the episode that the term “gypped” wouldn’t be used today.

There were a few emails for this week’s podcast. David Allen wrote in to share that state troopers where he is from bring their squad cars home with them. Johnny De Silveira wanted to explain the carts at the airport. They are mostly used for the elderly or handicapped, where true VIPs have other advantages for getting to the gate quickly. He asked why they didn’t give Crazy Joe Devola a middle name like most serial killers, but Akiva pointed out that Joe can be his middle name and Crazy his first. Johnny also pointed out that the inflation calculator would have Newman’s $75 ticket at $124.93, and Susan’s dry cleaning bill would be $30.93. Chester emailed to point out how Kramer and John McEnroe are both interested in freaks, and how ironic it is for George to talk about the characters in the show reading when he famously only reads Mike Lupica columns.

Tune in next week as the guys will recap “The Wallet”.  Though this episode and the following “The Watch” are also a two-part arch, they decided to do them separately since there is a lot to cover in each.  Send in your questions by emailing[email protected] .  Don’t forget to subscribe to the podcast by going to postshowrecaps.com/seinfeldITunes where you can rate and review the podcast.  Follow them on twitter @robcesternino and @keev26. 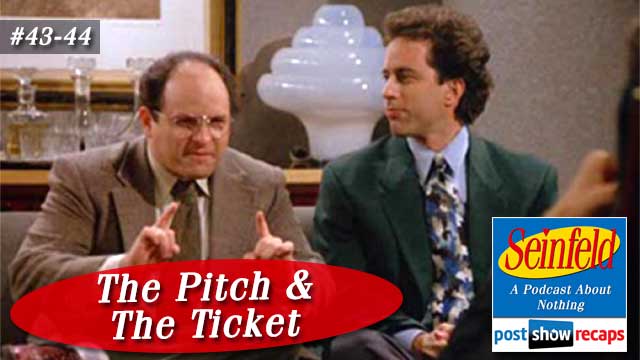