Rob Cesternino and Akiva Wienerkur discuss what Rob calls the first great Seinfeld episode of all time, “The Pony Remark”.

The plot of the episode involves Jerry and Elaine attending the 50th anniversary party of one of Jerry’s relatives, Manya. Since the party is so boring Elaine makes a comment about how she doesn’t like ponies and Jerry chimes in that he hates anybody who ever had a pony – not knowing that Manya was very attached to a pony from her childhood in Poland.

The comment upsets Manya so much that she ends the party prematurely. Days later, Jerry learns that Manya has died and her funeral is in conflict with the championship game for his softball team. Jerry weighs whether or not he should attend the funeral of his relative whom he did not know but may have inadvertently killed.

Not surprisingly, the episode is taken from events that occurred in the real life of Larry David.

Among the topics discussed in the episode are how the Kramer character is finally starting to take shape with his discussion of levels in his apartment, the cheapness of the real Morty Seinfeld and how great George is in his limited role in this episode.  Plus, we take a closer look at some of the unique rules in Jerry’s softball league.

Join us next week when Rob and Akiva discuss the final Seinfeld episode from the first season of the show “The Jacket”. 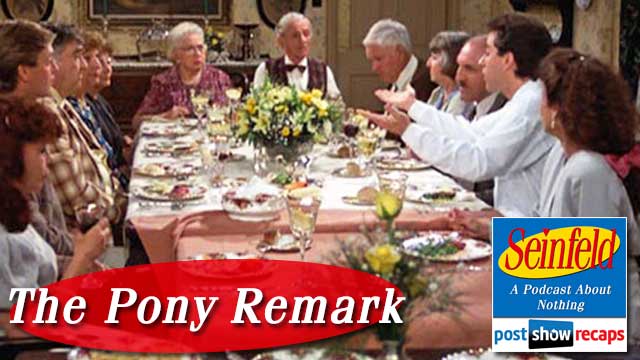