Seinfeld Post Show Recaps: The Secret Code
Rob Cesternino and Akiva Wienerkur didn’t get Leapin’ Larry as a sponsor this week, but they still brought a quality recap once again.  This time, they break down “The Secret Code”, which first aired November 9, 1995 as part of season seven.  The episode was written by Alec Berg and Jeff Schaffer.
News – Akiva shared that the feedback on last week’s unique episode was more positive than they were anticipating.  Akiva also had a story about a man who tried to pull a Kramer and bring thousands of cans to Michigan to capitalize on their 10 cent deposit return for all cans and bottles.  He was arrested and is facing prison time, as doing this is considered illegal.
Jerry’s Story – Jerry’s asked to do an advertisement for the local electronics store called Leapin’ Larry’s.  Jerry inadvertently offends Larry when an employee thinks Jerry is making fun of Larry’s prosthetic leg, when really his leg had just fallen asleep.  After smoothing over things with Larry, Jerry’s leg falls asleep again, but this time he accidentally kicks over a can of paint thinner, which causes the store to catch fire when it poured into an electrical outlet.
Elaine’s Story – Elaine becomes rather obsessed with Fred, who said “nice to meet you”, when they already met before.  Him not knowing her inadvertently caused her to want to go on a date with him, but when they go out, she realizes he is dreadful and can’t wait to escape.
George’s Story – George has the biggest storyline of the episode.  Things start off in the wrong direction for him when he’s reluctant to share his ATM pin with Susan.  In addition to this trouble, he also finds himself as Peterman’s right hand man when both Elaine and Jerry bail out of a dinner with all of them.  He becomes further entrenched when Peterman makes George go with him to his ailing mother’s death bed.  While there, he decides to share his ATM pin code with her, but she starts shouting it out right before passing away, leaving Peterman to be concerned about what Bosco means.  Both stories collide together when the fire Jerry started at Larry’s causes a man to be trapped in an ATM, and George has to reveal his ATM code to Peterman to help get the man out.
Kramer’s Story – Kramer has ambitions of helping the local fire department by providing them with a map of his shortcuts to get to fires more quickly.  While there pleading his case, he’s rebuffed by the captain, but on his way out, accidentally knocks out one of the fireman.  Kramer gets to fulfill his dreams of drive the ladder on the truck from this, but his lack of training causes the truck to get out of control, and they don’t make it to the fire at Leapin’ Larry’s on time.
Grades and Rankings – Akiva thought this was a mediocre episode, ultimately slotting it at 127.  Akiva gave Jerry a B, Kramer an A-, George an A-, and Elaine got a D-.  Rob was in agreement with all, particularly Elaine’s grade, feeling her storyline had no traction at all.
Emails – Johnny De Silveira noted that the firehouse scene is the same exterior shot used in Ghostbusters.  Max the millennial thought this was a subpar episode as well, thinking the Citizen Kane reference was particularly out of touch with the millennial crowd.  Craig from Vancouver asked if either of them keep secrets from their wives.  Rob said he shares more on the podcast than he does with Nicole.  Craig also asked if Nicole would listen to the whole podcast if she could find out some kind of secret about him, but Rob thought she wouldn’t spend the time.
Lindsay wondered if their ATM pins were something they go to great lengths to keep secret, but neither of them felt it was that important.  She also agreed with them both about how useless the Susan character is this season.  Roger asked if Bosco is an actual thing?  Rob thinks the powdered drinks are far inferior to the syrup, and Akiva confirmed that Bosco still exists. Caleb also asked if they felt the same way when their wives asked about the ATM pin, to which they confirmed they didn’t worry about keeping it secret.  He also had a game for them, providing a list of less famous people that appeared on the Celebrity Apprentice.  Rob was able to debunk everyone on Caleb’s list as more famous than Larry Thomas, The Soup Nazi.
Amir asked why Jerry and George needed a good excuse to get away from Peterman.  The guys agreed, feeling there were a number of perfectly good excuses they could have used.  He added that George should have changed his ATM code once Peterman’s mother shouted it out.  Chester closed things out by pointing out how there have never been ATM codes longer than four digits.  He also wondered why Leapin’ Larry’s employee would laugh, thinking Jerry was making fun of Larry.  He also wondered why George would walk into Peterman’s mom’s place, barely knowing Peterman, but Rob felt Peterman probably strong armed George into it.
Tune in next week as the guys will recap “The Pool Guy”. Send in your questions by emailing [email protected]. Don’t forget to subscribe to the podcast by going to postshowrecaps.com/seinfeldITunes where you can rate and review the podcast. You can get a discussion going about the podcast by leaving a comment on the show page, and as always, you can follow them on Twitter @robcesternino and @keev26.
Special thanks to Mike Moore for this week’s episode summary. 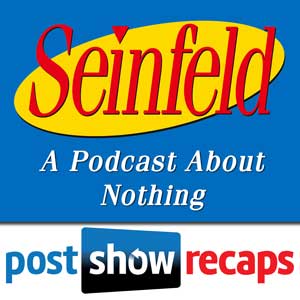 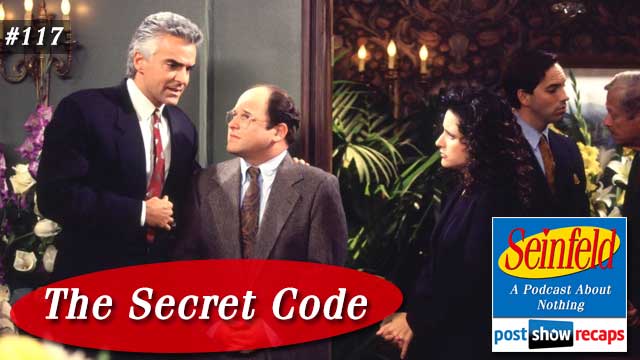