Rob Cesternino and Akiva Wienerkur continue their journey to watch every Seinfeld episode as they discuss Season 9, Episode 7, “The Slicer.”

Seinfeld Post Show Recaps: The Slicer
Rob Cesternino and Akiva Wienerkur are fresh from earning their doctorate in podcasting and are ready to bring you the next Seinfeld Post Show Recap . This time the guys discussed “The Slicer”, which first aired November 13, 1997 as part of season nine. The episode was written by Gregg Kavet, Andy Robin and Darin Henry.
Jerry’s Storyline – Jerry is on a date with a dermatologist named Sara, but her belittling him for not being a life saver gets on his nerves.  When he learns she is a dermatologist, he incorrectly assumes she couldn’t save lives and wants to bust her on it.  Right after he calls her out on this at a restaurant, a man she saved from skin cancer comes over to the table to thank her.  A few days after this mishap, Jerry starts developing a rash, which he thinks is payback from Sara.  He calls her out on this as well, but then learns soon after the rash was caused from Kramer using Jerry’s bath towel to clean his slicer. Grade: Akiva – B+, Rob – B-
George’s Storyline – George is interviewing for a new job at Kruger Smoothing, when he notices himself in the background of one of Mr. Kruger’s family vacation photos.  It reminds George of an altercation several years ago that led to him throwing Kruger’s son’s boom box in the water. Desperate to keep Kruger from remembering him, George steals the photo to have himself photo-shopped out.  When he gets it back, Kruger was removed instead, and could only be put back in if George gets a shirtless photo of him. Having Kramer pose as a dermatologist during the cancer screening allowed this to happen, though Kruger refuses to have a mole looked at based on the mole being the same size in his photo.  Grade: Akiva – A-, Rob – A-
Elaine’s Storyline – Elaine’s neighbor is out of the country, but has forgotten to turn off the alarm clock.  Kramer helps her by blowing the fuse, but this causes a new problem when the automatic feeder for the neighbor’s cat shuts off.  Now with the problem of having a starving and meowing cat next door, Elaine once again elicits Kramer’s help, this time by borrowing the meat slicer to feed meat to the neighbor’s cat.  She ends up damaging the slicer when she gets too comfortable and uses it to even out her high heels.   Grade: Akiva – C, Rob – D+
Kramer’s storyline – Kramer is fed up with sandwiches and deli meat in general, so he decides to buy his own meat slicer.  Despite buying so much meat the butcher gave him a free white coat, he lends the slicer to Elaine for her problem with the neighbor’s hungry cat.  This coat comes in handy though when George enlists Kramer to be apart of his plan to get a shirtless picture of Kruger by having him pose as a doctor.  Kramer wraps himself into Jerry’s storyline by causing Jerry’s horrible rash when he used his bath towel to clean the slicer with toxic metal cleaner.  Grade: Akiva – A-, Rob – A-
Episode Ranking – 57
Emails – Johnny De Silveira shared how he enjoyed the callback to Kramer’s fear of clowns in the Joe Devola episode.  Lindsay asked the guys if they’ve purchased any useless kitchen appliances.  Mikewrote in wondering if Nicole belittles Rob about how she saves lives every day.  Shawn Falconer checked in, noting that the Kenny Kramer Tour schedule won’t be out until later this summer.  Craig pointed out the discrepancy in George’s hairline in the series premiere versus the 1989 in that photo.  Pat asked why George didn’t just leave the picture alone.  Amir wondered why Elaine wouldn’t just call the super of the building.  Finally, Chester chimed in with an array of takes.
Tune in next week as the guys will recap “The Betrayal”. Send in your questions by emailing[email protected]. Don’t forget to subscribe to the podcast by going topostshowrecaps.com/seinfelditunes where you can rate and review the podcast. You can get a discussion going by leaving a comment on the show pages, and as always, you can follow them on Twitter @robcesternino and @keev26. 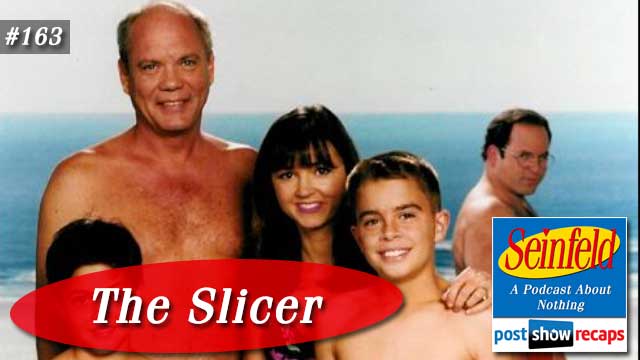