Rob Cesternino and Akiva Wienerkur continue their journey to watch every Seinfeld episode as they discuss Season 5, Episode 4, “The Sniffing Accountant.”

Rob Cesternino and Akiva Wienerkur put down their dental tape and brassiere research books for their weekly recap of Seinfeld. This week, they talk about “The Sniffing Accountant”, which first aired October 7, 1993 as part of the fifth season.

Akiva of course had some Seinfeld news this week. Someone dubbed a Kanye West clip from the MTV Video Awards with the Seinfeld theme music and laugh track. He also continued with his Seinfeld tweet of the week. @cbgrande said “How much power could we generate if we burned all our old and unused Seinfeld clips”. @jamiegriffith80 says “The Contest, Opposite and Marine Biologist are all classics, but for me, there’s no greater episode than The Sniffing Accountant”. Rob had his Seinfeld Scene It trivia question of the week for Akiva, who had no trouble bettering his record to 5-5.

Jerry’s opening standup is a bit about when you are a grownup, the government closely mirrors your parents, and references Leave It To Beaver’s Eddie Haskell as the accountant when you are audited. The episode opens at Monks, with them sitting at the side table. Rob and Akiva questioned if they use that shot when they don’t have access to extras. Jerry is wearing a strange sweater and Elaine is talking about her new relationship with writer Jake Jarmel. They met because Jake came up to feel the fabric of her shirt, a move she found impressive.

As they continue talking, they bring up how Elaine’s accountant is handling a CD investment for Jerry, Kramer and Newman. Rob and Akiva debated the liquidity of the money they invested, considering a CD is a low risk investment where the money is locked up. Rob also pointed out how Jerry’s real life accountant had bilked him out of $50,000 from getting involved with drugs. Barry the accountant stops by Monks to say hello, and while talking with them, he sniffles quite a bit, then rushes off to the bathroom. This behavior set Jerry off to think he could possibly have a cocaine problem.

George is at his parents house listening to his dad tell him of a job opportunity he lined up for George as a bra salesman. Frank has Estelle bring out one of her bras for George to study as he explains the difference in cup sizes. When George accidentally gets catsup on Estelle’s bra, she yells at him. Rob found this scene had little substance, but both he and Akiva found it very funny.

Back at Jerry’s, Jerry tells Kramer of the potential drug issue with Barry the accountant. During this conversation, Jerry decides he has to get rid of the itchy sweater, so he gives it to Kramer. In the next scene, Elaine is praising Jake for cooking and cleaning in her apartment. Things turn when she notices he didn’t use any exclamation points in the message telling her a friend had her baby. The argument turns so sour that Jake leaves.

Back at Jerry’s, Elaine is wolfing down ice cream right out of the container as she tells the exclamation point story. Kramer comes in checking about the sniffing accountant, and calls his office to learn he is currently in South America, a hotbed for the cocaine trade. Newman comes in, and we he learns Barry is in South America, they all agree to stakeout Barry.

While on the stakeout, Newman and Jerry are waiting for Kramer to conduct some reconnaissance, discussing how certain days have a feel, and the difference between dental floss and dental tape. Rob and Akiva took a moment to discuss what days have the most feel. Meanwhile, Kramer sits down next to Barry at the bar wearing the strange sweater, smoking a cigarette while pounding his beer. A waitress slams him in the head with the bar shelf as she opens it. As he tries to goat Barry into a discussion about drugs, Barry doesn’t bite. When Barry starts sniffling and heads to the bathroom, Kramer tries to tell him he’s “hip to it”, but Barry doesn’t understand. While Barry’s in the bathroom, Kramer kicks the door down and takes a polaroid.

In the next scene, George is at his interview to be a bra salesman. He tells Farkus the interviewer a great story about his lifelong love for bras, impressing him so much he’s hired on the spot. As he leaves, he notices an attractive woman, so he tries to move of feeling the fabric of her jacket, though the results are far worse. The lady calls for Farkus, and informs him that if he wants to hire George, he’s out of a job himself. Akiva felt this scene would have taken place in a bad episode of Caroline in the City.

Elaine is in her office talking with Mr. Lippman. He informs her that she’s edited Jake’s story with too many exclamation points. Akiva and Rob debated whether Elaine added these in the story to get back at Jake Jarmel.

Back at Jerry’s, he, Newman and Kramer construct a letter to Barry dissolving the financial relationship, adding in many exclamation points and ultimately the polaroid of Barry on the toilet. Newman leaves to mail the letter when the pizza guy comes in sniffling. He points out that the strange sweater must be made of mohair, which he’s allergic to. While Newman is going to drop the letter in the mailbox, he attempts to feel the fabric of a woman’s jacket, and she yells out for help. He runs for it, dropping the letter on the ground.

Back at George’s parents, George is getting yelled at by both parents for blowing the job interview. In the final scene, Jerry shares that Barry has filed for bankruptcy for blowing all the money of his clients on drugs. Had that termination letter been delivered, the money could have been saved. Lastly, a woman feels the fabric of Jerry’s shirt, and he flirts with her about it. Jerry’s closing standup is him telling the story of his accountant losing all of his money, but understands why he would do drugs from having such a boring job.

In 2015, there would be only a few things different in the episode. George wouldn’t be a bra salesman and nobody handwrites a phone message for anyone. In the rankings, Akiva and Rob both felt that at first glance, this would be a low ranked episode, but both found themselves laughing out loud quite often on the rewatch. Akiva decided that 98 was the right spot.

As always, they end the podcast with listener emails. Craig from Vancouver noted that Kramer’s work in this episode definitely helped toward him earning the Emmy. He also shared that Larry David, who wrote the episode, actually was a former bra salesman. Regis emailed to share his knowledge that rabies can definitely be fatal without the vaccine.

Johnny De Silveira shared that his father went to school with the brother of the actor who plays Barry. He also said that Larry David really tested how feeling various peoples fabric would work in real life. He finally shared that the mohair sweater was the sweater that the unemployment lady’s daughter wore in “The Boyfriend” on her date with George. Colin the delivery guy expert pointed out that it’s strange for the pizza guy to know Jerry and Kramer by name, and doesn’t ask Jerry if he wants change for his twenty. Amir emailed to show that while he originally thought Bob Sacamano was fake, he learned that Jerry actually attended a party Bob threw in a later episode. He also wanted to point out that George was reading a Glamour magazine in the episode.

Finally Chester wanted to know why Jake would take a message for Elaine when she has an answering machine. Akiva said that back in the 90s, it was common to answer people’s phones for them. He also questions if Elaine breaking up with Jake for not using an exclamation point is the dumbest breakup reason yet, to which Rob and Akiva agreed. He wondered their thoughts about calling it an exclamation mark or exclamation point. While there is no regional reason for saying one or the other, Akiva and Rob thought they’d ask some Canadian listeners to weigh in. Lastly, he wondered what the tally of Jerry’s lost money is so far after this episode. Akiva noted that he was down $7000 prior to this, so with the $40,000 loss here, he’s down $47,000.

Tune in next week as the guys will recap “The Bris”, where Akiva hopes to get some insight from a Mohel friend of his. Send in your questions by emailing [email protected]. Don’t forget to subscribe to the podcast by going to postshowrecaps.com/seinfeldITunes where you can rate and review the podcast. You can get a discussion going about the podcast by leaving a comment on the show page, and as always, you can follow them on Twitter @robcesternino and @keev26.

Special thanks to Mike Moore for this episode recap. 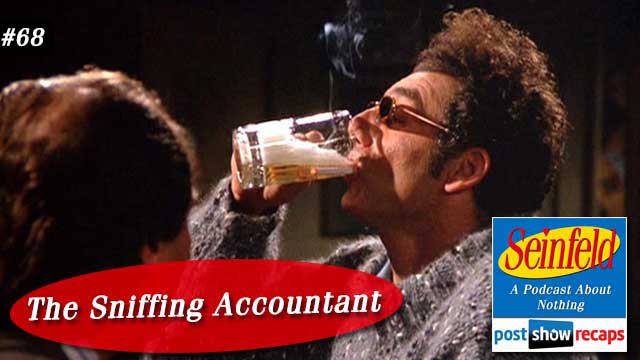