Rob Cesternino and Akiva Wienerkur didn’t need to be handcuffed to a bed to cover the next Seinfeld episode in Post Show Recap’s coverage of the entire series. This week they talked about “The Subway” which first aired January 8, 1992.

Akiva thought this was a classic episode, and really enjoyed that each of the four characters got a substantial storyline. Rob agreed that it was an interesting episode, but he didn’t find it as hilarious as some others they’ve covered so far.

Before delving into the episode, Rob checked in with Akiva about his offer to pay $1.29 to anyone who watched all nine episodes and hated his favorite show of 2014, Review. With the quick turnaround between last week’s episode dropping and the taping of “The Subway”, no one had a chance to email him, so they decided to revisit the topic next week. Rob had a chance to watch it, and agreed with Akiva that it was great.

Jerry’s opening standup ties into the episode well, with a bit about the bumper cars at the amusement park. the episode starts off in the coffee shop, with Kramer giving Jerry extensive directions on how to get to Coney Island so he can retrieve his stolen car that was found, though it was for not because he can just take one train right there.

George was heading off to a job interview, which Jerry took as an opportunity to rib George, comparing him to the hard on his luck character Biff Loman from Death of a Salesman. George learns that Elaine is going to be the “best man” at a lesbian wedding, wondering which one will be the groom, and if that is politically incorrect to ask. Rob confirmed that it was a politically incorrect thing to ask, adding that in 1992, attending a lesbian wedding would be an unheard of concept.

When they all get on the train together, Kramer shares that he is headed to city hall so he can pay his many parking tickets, including one for having no doors on his car. Jerry is concerned that when they split off separately, he’ll fall asleep on the long train ride out to get his car. Before they separate, a blind man playing a violin comes by, and George explains to him that he doesn’t carry change in the pants he’s wearing, remarking to the gang that he thinks the man isn’t blind. Akiva pointed out it’s another jab at George for being cheap. Jerry meanwhile is trying to convince George to skip the job interview and accompany him to Coney Island.

When everyone goes their separate ways, we see Jerry sitting alone, across from a large man reading the newspaper. Rob shared that he was the great Mr. Carosi, the manager of the Malibu Sands Beach Club from Saved By the Bell. Akiva pointed out that he is also the voice of Pumbaa from The Lion King.

George, on his train, is sitting across from a well dressed, attractive woman who catches his eye. Kramer has an epic physical scene where he attempts to find a seat on his train to no avail. The scene cuts back to Jerry, who falls asleep in his seat, just as he feared. Back to George, the attractive lady starts talking to him what he does for a living as he’s reading the paper. He of course feeds her a bunch of lies about working in the stock market.

Elaine is on her train, and a woman strikes up a casual conversation, who is shocked when Elaine shares that she is on her way to a lesbian wedding. Kramer meanwhile, overhears some guys talking about a sure bet on a horserace. The guys tell the memorable story about this horse loving “the slop”, and how his mother was a mudder and his father was a mudder.

Jerry wakes up to see the large man across from him is now naked, with all other passengers huddled far away from them. Jerry is very open about how unpleasant the man’s body is for him to be riding naked. Elaine’s train has stopped, and she has an intense inner monologue to keep from freaking out. Back at George’s train, he is invited to the hotel room of the attractive woman, so he skips out on the job interview, taking the bait. On his way off the train, he gets stuck in the doors, needing the woman to pull him out.

At the hotel room with the attractive lady, she tells George to get comfortable while she changes. George settles on taking his shoes off and sitting on the bed. Rob and Akiva both felt that they would at least take off their blazer and loosen the tie if they were asked to get comfortable. When the lady comes out, she’s in a negligee.

In the next scene, Kramer is at the Off Track Betting Parlor, retelling the story of this long shot horse to one of the gamblers. The scene cuts back to Jerry and the naked man, who are discussing the upcoming season for the Mets, talking casually, despite the man being naked. Rob shared that the Mets of 1992 were dubbed the worst team money could buy, despite having baseball’s largest payroll at the time.

Back to George in the hotel room, the woman handcuffs him to the bed, but all George can talk about in this situation is how his mother would walk around in her bra and panties at home. She then walks over to his clothes and fishes through his wallet, only to discover that George had eight dollars in his wallet, effectively ruining her con game. To make up for it, she takes his suit, which George exclaims cost him $350.

The scene cuts to Kramer at the OTB, where he battles several emotions, first terrified when the horse is losing, then ecstatic as he comes down the stretch to win. Rob and Akiva figured out that Kramer turned his 600 dollars into 18,000 with the 30-1 long shot. Akiva wondered why Kramer wouldn’t have been given an escort since he was walking out with all that money. As Kramer leaves, he notices a thuggish man eyeballing him, and follows him to the subway. As he runs through people on the subway, the thug grabs him for the money, but the blind violinist comes to his rescue, since he’s an undercover cop.

Both Rob and Akiva thought this was way over the top, not fitting to the typical Seinfeld theme. Rob came up with an alternative ending to fit better with the show. He thought that the thug could be cut out all together, but Kramer could sit down with all his money next to George’s con woman, with the implication that she would then bilk him out of the money.

The final scene is back at the coffee shop where we see that Elaine has missed the wedding, Jerry didn’t get to pick up his car, but did make a friend in the naked man. Rob and Akiva wondered where the naked man was headed on the train. George shows up wearing just a bed sheet, and as they leave, Kramer drops a large wad of bills on the table to pay the tab. Rob deemed Kramer and Jerry winners this episode, while George and Elaine end up losers.

They discussed what would be different in 2014 in “The Subway”. Rob felt that a smartphone would have solved Jerry’s problem of falling asleep. He and Akiva talked about different ways to entertain themselves on a long train ride, including eating, which caused both to pine for some Chinese food.

There were very few emails with the quick turnaround between episodes. Chester of course had an email where he asked how Elaine was the best man at a lesbian wedding, considering she never mentioned these people before or after this. The guys agreed, adding that it was strange that she didn’t even go by after with the present, instead just retreating to the coffee shop. Chester also asked who counts seconds by bananas like Elaine did in the episode. At first neither remembered this happening, but then confirmed the scene, and agreed that it was unusual. Chester also wondered if George is perhaps the worst dirty talker of all time, bringing up his mother wearing bra and panties around the house when things heat up.

Akiva felt this was a great episode, in fact it’s the third highest ranking of the episodes covered so far at 42. Rob would have it in his top 100, but didn’t feel it cracked his top 50.

Tune in next week as the guys will recap “The Pez Dispenser”, a classic episode where Kramer comes up with his iconic idea of a cologne that smells like the beach.  Subscribe to the podcast at postshowrecaps.com/seinfelditunes, where you can rate and review it.  Don’t forget to send your emails to have read on the air by sending them to[email protected].  Follow Akiva and Rob on twitter @keev26 and @robcesternino.
View our archive of Seinfeld Episode Recaps to This Point 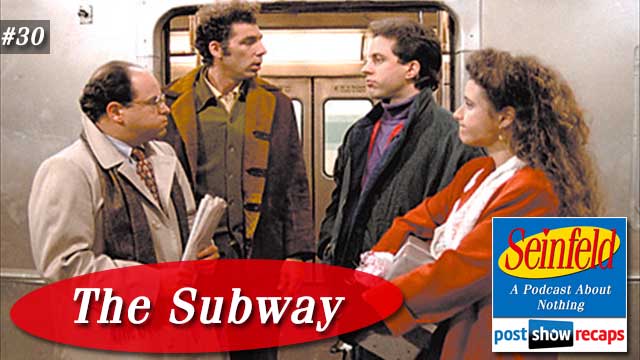