Rob Cesternino and Akiva Wienerkur continue their journey to watch every Seinfeld episode as they discuss Season 9, Episode 2, “The Voice.”

Seinfeld Post Show Recaps: The Voice
Helloooooo!  Rob Cesternino and Akiva Wienerkur gave up doing their favorite silly voices just to bring you another Seinfeld Post Show Recap. This time they discussed “The Voice”, which first aired October 2, 1997 as part of season nine. The episode was once again written by the team of Alec Berg, Jeff Schaffer and David Mandel.
Jerry’s Storyline – Jerry has a running gag with the gang about his new girlfriend Claire’s belly button talking to him at night in a silly voice.  She gets upset with him when she learns what the voice is about, and only agrees to see him again if he stops using the voice altogether.  He has to stoically contemplate his decision, then runs to her apartment to tell her he’s choosing the voice.  When both George and Kramer confirm the voice is played out, he once again convinces her to come back to him. The episode ends with Claire getting hit with the giant ball of oil when she refuses to acknowledge Jerry because his shouting sounded like the voice.  Grade: Akiva – turns chair around, Rob – turns chair around
George’s Storyline – George is facing the fallout from being caught faking his handicap.  While they can’t fire him, they start doing everything they can to make him quit, including boarding up his office.  Even when Play Now offers to buy him out for six month’s salary, George continues to show up to work. The stakes raise further when Mr. Thomassoulo opens George’s private bathroom to the rest of the staff.  George decides to get back at him by allowing Kramer and Darin to test their oil bladder system with a playground ball from his work.  Ultimately the plan causes Clair to sue, bankrupting Play Now and leaving George out of a job.  Grade: Akiva – turns chair around, Rob – does not turn chair around
Elaine’s Storyline – Elaine runs into Puddy at the coffee shop, to which Jerry predicts she will get back together with him.  They even bet on it, and Elaine is forced to pay up when Jerry catches her wearing the same clothes as the day before.  She insists it’s just a backslide, even going double or nothing on her bet with Jerry.  She loses that bet again though, several times over.  During one of her trysts with Puddy, he talks a little to glowingly about their purely physical relationship, so she punishes him by getting back together and making him cuddle.  In the end, Puddy breaks it off with her.  Grade: Akiva – does not turn chair around, but gives her praise, Rob – turns chair around
Kramer’s storyline – Kramer discovers his ideas are being used all over town, so he decides he needs to get his business, Kramerica Industries, back up and running.  He discovers he can’t do it alone, so he enlists a student intern from NYU to help him with various things, including his idea for a rubber bladder that can hold the oil inside tankers, preventing spills.  NYU reads over Darin’s internship notes that include him mending chicken wire, and he’s forced to find another company to fulfill his school requirements.  Despite this, he comes back to Kramer to see the bladder idea through.  The idea is a failure though, and Darin somehow ends up going to jail for a long time.  Grade: Akiva – turns chair around, Rob – turns chair around
Episode Ranking – 69
Emails – Johnny De Silveira wondered what Darin was convicted for doing.  Caleb wondered what impression Rob does that Nicole hates.  Lindsay asked what they could put up with before quitting a job.  Ariel noted how great it is that Scott St. Pierre is adding in music to the background now.  Amir asked if this is the most damage the gang has done to others in one episode.  He also wondered why George didn’t just tell Play Now the truth.  Finally, Chester chimed in with an array of takes.
Tune in next week as the guys will recap “The Serenity Now”. Send in your questions by emailing [email protected]. Don’t forget to subscribe to the podcast by going to postshowrecaps.com/seinfelditunes where you can rate and review the podcast. You can get a discussion going by leaving a comment on the show pages, and as always, you can follow them on Twitter @robcesternino and @keev26. 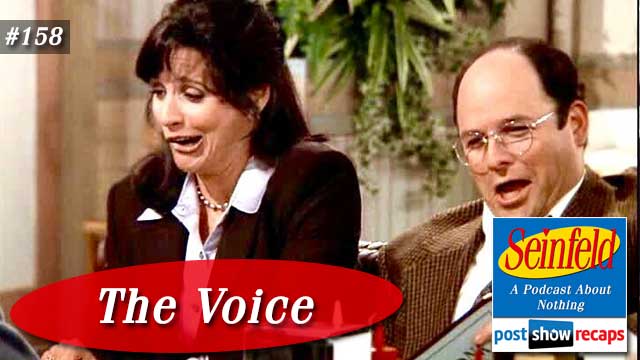