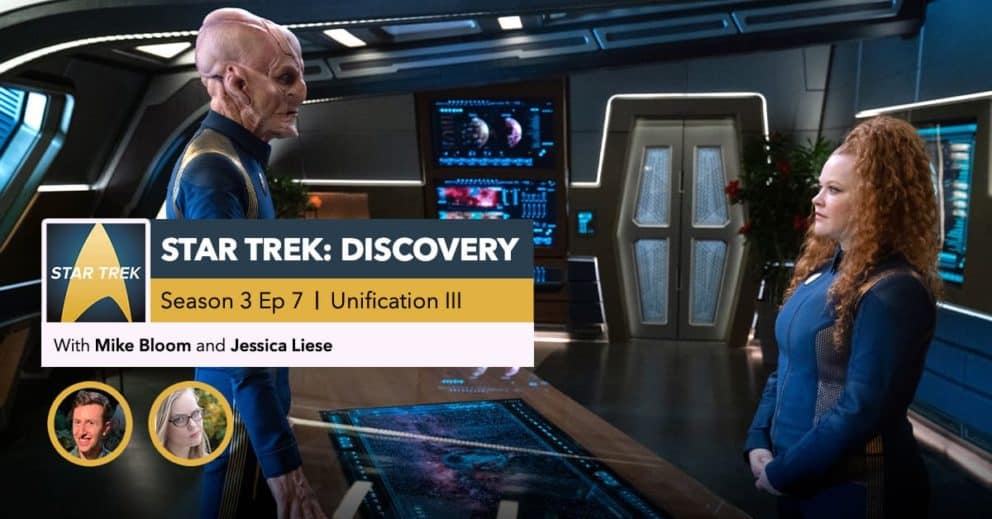 Jessica Liese (@HaymakerHattie) and Mike Bloom (@AMikeBloomType) are coming together to talk about a much more noteworthy reunion on this week’s episode of Star Trek: Discovery.
“Unification III” sees Spock’s work from the Next Generation episodes of the same name come to fruition, as the Vulcans and Romulans have finally unified after centuries of rivalry. Michael Burnham must face off with a very unfamiliar version of where she grew up to get some essential information on “The Burn.” And as she defends her values, Saru is looking for her replacement, and finds it in perhaps the most unorthodox place.
Jess and Mike will be bringing recaps of Star Trek: Discovery every weekend throughout season three. For feedback on the episodes, reach out to them or @PostShowRecaps on Twitter or email [email protected].
About Star Trek: Discovery…
After following Commander Burnham into the wormhole in the second season finale, season three of Star Trek: Discovery finds the crew of the U.S.S. Discovery landing in an unknown future far from the home they once knew. Now living in a time filled with uncertainty, the U.S.S. Discovery crew, along with the help of some new friends, must work together to restore hope to the Federation.