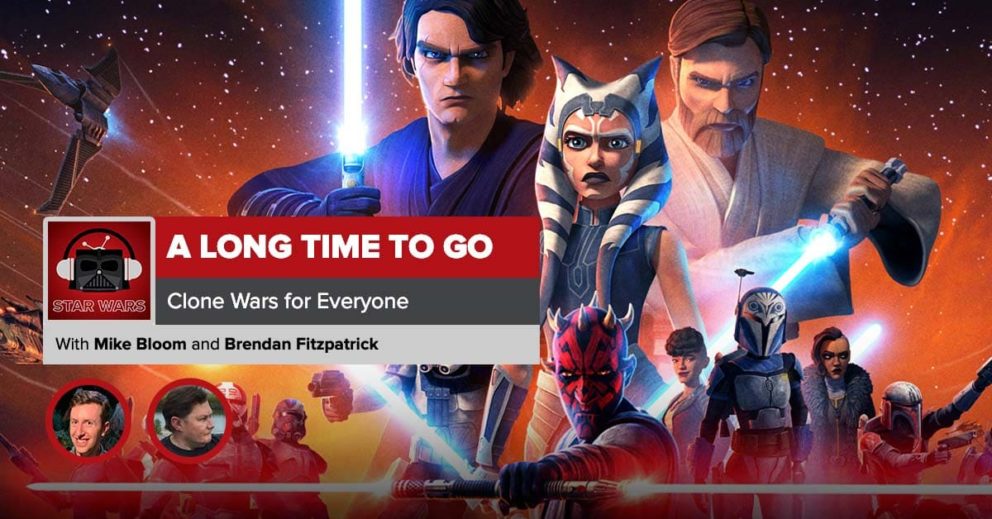 We have a long time to go in the galaxy far, far away, as Post Show Recaps continues forward with regular “Star Wars” content.

Hosted by Josh Wigler (@roundhoward) and rotating guests, “A Long Time to Go” treks through the galaxy far, far away over the course of many months, with various corners of the “Star Wars” extended universe highlighted in the process. The podcast will cover one project per month in the form of various different podcasts: ridiculous recaps, sharp analytical debates, and feedback episodes, to name a few of the different shenanigans afoot.

In this week’s podcast, Josh is missing in action after his fighter ship went offline in a skirmish. Mike Bloom (@AMikeBloomType) steps in to pilot for the time being, but he’s not alone. Post Show Recaps Jedi master and Star Wars super-duper fan Brendan Fitzpatrick (@FitzyBrendan) joins Mike to break down the incredibly popular CGI series “Star Wars: The Clone Wars.”
In the beginning, Mike and Brendan give a spoiler-free overview of the seven-season series, including what it is, the proper viewing order, and whether or not it’s the best Star Wars. Then, starting at 45:33, they head into spoiler space, as they talk through some of their favorite characters, episodes, and arcs, as well as how the show connects with what’s to come with all the new Star Wars content on the horizon.
Coming your way next month: Josh returns to recap “Revenge of the Sith”! Send feedback about Episode III along to [email protected] or sign up for the Post Show Recaps patron discord at patreon.com/postshowrecaps.

Star Wars: Attack of the Clones Debates + Feedback | A Long Time to Go

Star Wars: Attack of the Clones Recap | A Long Time to Go