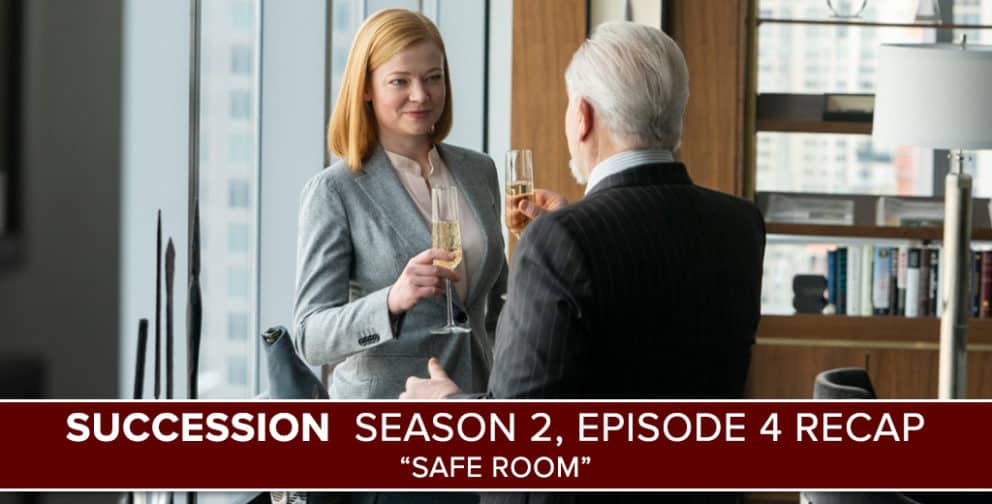 Josh Wigler (@roundhoward) and Emily Fox (@emelette) enter their top-secret safe room to deliver their takes on Succession season two, episode four, titled … well, “Safe Room.”
Important note: the “Safe Room” podcast is hitting your feeds earlier than expected, thanks to HBO releasing the episode two days in advance of its normal Sunday night time slot, due to the Labor Day holiday weekend. If you were not yet aware of the episode’s early release, now you are! It’s streaming on HBO Go and on demand, and you should absolutely watch it before Josh and Emily spoil the episode.
In “Safe Room,” Waystar Royco goes on lockdown during a potential active shooter situation. In the process, many truths are revealed: Logan (Brian Cox) and Kendall (Jeremy Strong) attempt to woo PMG CEO Rhea Jarrell (Holly Hunter) in their continued quest to buy the blue-blooded media empire, while Shiv (Sarah Snook) watches from the sidelines, feeling like a kid stuck in the corner with a coloring book. Her husband Tom (Matthew Macfadyen) suffers through some feelings of inadequacy of his own, as Cousin Greg (Nicholas Braun) announces his desires to move onto bigger and better things — and he’s not afraid to use his leverage to get there. Plus, Roman (Rory Culkin) becomes Ron Rockstone and makes a new friend, all while Connor (Alan Ruck) delivers the blandest eulogy of all time.
There is no feedback in this week’s podcast recapping “Safe Room,” due to the unique timing, but there will be a special feedback episode coming next to your Succession podcast feeds. Make sure to send all of your questions and comments to @PostShowRecaps on Twitter, or by using our feedback form.