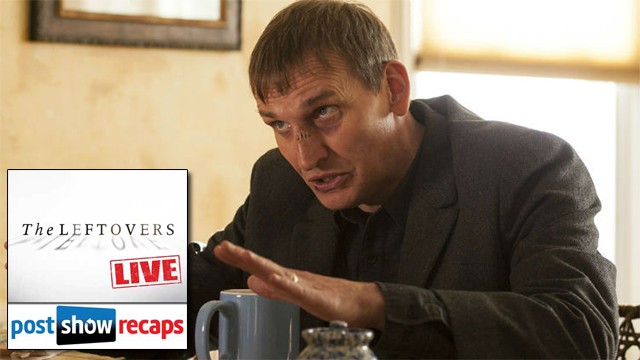 Welcome back all you Lefties…or Left ovaries… which sounds better? So far this series has the vibe of dating someone new, whom you’re not sure about yet. You don’t know if you like her/him that much yet, but you play along so you don’t burn any bridges and the whole thing feels like a gigantic real life version of Whose Line Is It Anyways?

You come up with neutral things to say that keep the relationship stabilized until you get to the point that you’re certain that you don’t want to see the person anymore. Then you play the “It’s not you; it’s me” card, or the “I’m going through a tough time right now” and you insert something made up or a hard/sad anniversary of something that really doesn’t affect you that badly anymore, knowing the other person can’t really question it because it will make them look like a douche (personally my favorite).

This is where we are with The Leftovers. We’re both seeing each other, but unsure if this relationship is long term or not. We want it to work because The Leftovers has the pedigree with Damon Lindelof as a creator, it’s on HBO, and the story has the potential to grip us, but so far we’re not certain if The Leftovers is “the one”. So here’s hoping that tonight is the night that we go out for drinks, get hopped up and make some bad decisions. I’m really hoping, tonight is the night that the show turns the corner. Let’s get into the action:

Speaking of shows that never turned the corner… Boardwalk Empire (It was a part of the HBO clip montage before the start of tonight). Am I wrong in that opinion? I felt like we all wanted Boardwalk Empire to be epic, but it missed a little something, something. I can’t quite put my finger on it, but I know that I personally don’t know anybody that has been in love with that show. Anyways, this is a Leftovers blog, so why the hell am I droning on about Boardwalk Empire? Did I mention that I have ADD?

We start the show with the angry minister who is probably based on 1 or 2 or 6.7 million angry ministers in this country.  He continues on the happy vibe of the show as he talks about a kid slowly dying of cancer…Good times. Let’s all watch Terms of Endearment or Beaches after this! Not exactly a packed house for the minister’s happy times speech. Apparently someone is not happy with his story, as an older gent storms in and beats the shit out of Reverend Lovejoy then sticks one of the minister’s propaganda leaflets down his throat. The dude who beat him up was wearing a bandanna, which we haven’t really seen on T.V since Dan Cortese on MTV Sports:

I wouldn’t mind the bandanna look making a comeback. I feel like I could rock one and take my already semi-guido vibe to the next level.

After TV’s creepiest opening credits get done rolling, we go to the minister getting some medical treatment post-beatdown. He is played by the guy that I know has been in a million things but all that comes to mind immediately is Gone in 60 Seconds and the zombie movie, 28 Days Later. Out of those two movies, I think the zombie movie was ten times more likely to happen than the plot from Gone in 60 Seconds. The minister gets questioned about his newsletter where he writes about the sins of the departed and why what happened with them could not have been the “rapture”.  Sheriff Kevin joins the party and the minister decides not to press charges.

We continue on with the (I’m calling him a minister, but who the hell knows) minister as he screens a call from the bank and we find out that his ringtone is from the Karate Kid 2 soundtrack. If he really wanted to creep people out, he should have gone with The Exorcist theme song for his ringtone.

He goes down to see the sick girl he was praying for earlier and apparently she woke up and left the hospital. On this show, though, this moment does not come off like a happy moment. Not sure what that will look like on this show.

Speak of the devil… I guess if that’s your sort of thing… we get a young father with his infant baby paying the minister a visit as the father wants to get the son baptized. Instead of taking money for doing the baptizing, he gets paid with scathing info about another one of the departed’s checkered past. I guess this minister is the Harvey Levin/TMZ of Mapleton. The minister takes this info and goes after more at the local Mapleton casino. After bonding with a pit boss of the casino, he notices two pigeons that fly onto the roulette table, which I guess is supposed to be some poignant moment. I wasn’t feeling real poignant about this moment, though. I have a hunch that we haven’t seen the last of these pigeons tonight.

I guess we’re with the minster for the long run this episode as we’re with him again as he spots two women of the White gang smoking and staring at him on the street. He’s not hostile towards them, though, as he attempts to give them some donated clothes. He gets another call from the FDR bank telling him to come by. We go to the bank and find out that the church is getting sold. We don’t know who is buying it as of now, but I’m hoping it’s going to be an In-N-Out burger, because we need more of those. I live in Portland in Oregon and we don’t have any In-N-Outs here and it’s torturous.

Anyways, the priest is told he has 24 hours to come up with a matching offer for the church or else it’s going to be sold…Hey, this is actually playing into the Gone in 60 Seconds plot that he was a part of back in the day. He needs to call Nick Cage stat! Something tells me Nick Cage is “available” right now and I’m sure, stealing 50 cars in one night in Mapleton to save a church will put him back on top where he belongs.

Minister goes to talk to our favorite Mapleton insurance person, Nora. I guess they are related… brother/sister? He hits her up for the money and she counters with an offer of getting the money but he must stop the TMZ newsletter of the departed. On cue he shares with Nora that her departed husband was having an affair with their children’s pre-school teacher. Nora reacts in the “crazy women” way where they laugh as they’re disassociating. Minister leaves and we don’t know if he’s getting the money.

The next stop on the “This Is Your Life” tour of the minister is his place/home with a pissed-off caretaker that wants her money. We find out that his wife is comatose, which at this point we’re not sure if this is a good thing or a bad thing…just joking. I always like the fake pictures in movies/TV shows that show the character’s wedding pictures or random “happy times” photos of them on a grassy field or playing soccer.  I wonder if they have to spend like three days shooting those photos all for a two second background glimpse in a scene.

Mr. Minister sets off at night with a shovel and journeys off to the backyard of the sheriff’s house? Does he have One-Eyed Willy’s treasure buried there I wonder? He is greeted by a member of the White house gang, the artist formally known as the sheriff’s wife, who was creepily there alone swinging. She then plays a round of Pictionary and both decide to keep this encounter between the two of them and nobody else. He digs up the money and finds a note from the sheriff on one of his newsletters that talked about a corrupt judge. I can’t tell if the judge is the sheriff’s father Scott Glenn. I guess TBD. On his drive back, he spots his two pigeon friends and again I have no idea what the hell that is supposed to mean….again TBD.

He takes the money straight to the casino, a man after my own heart. Personally I like craps, but I guess he is going to the always reliable roulette…where the odds are definitely in your favor…what? And then he spits in the face of the Patron Saint of Roulette, Wesley Snipes:

by betting it all on red. Somehow he defies logic and wins the first round and decides to let it ride again on red as he is joined by a drunk guy who hopefully won’t jinx him…He’s up to 80,000 dollars. He again decides to let it ride…This is painful to watch as he tempts fate again……and…….he hits it!!…Did the pigeons make this happen and do they have more power than Wesley Snipes when it comes to roulette? #lingeringquestions

Oh hold up…you don’t piss on Wesley Snipes and get away scot free. The minister almost gets robbed in his car by the random drunk guy from earlier in the casino, but instead beats the shit out of his assailant. He then keeps the show’s tradition of having somebody scream loudly in his/her car out of nowhere as he takes his turn doing just that.

The next morning, the priest driving along happens upon two of the White gang members getting victimized by a drive-by rocking. He gets out of the car to help and he gets his own dose of a drive-by and is sent to the “cliché -TV-knocked-out dream sequence” that I think by law is required of every single TV show that has existed and will ever exist. His bizarre dream sequence takes place at a church and then a hospital room and then a burning house with a little girl and then a car accident scene where I guess his wife originally sustained her injuries. The next part of the dream is him having sex with his wife then the sheriff’s wife and then a fire…What the hell is happening? This had better mean something in the future…I hate pointless dream sequences that don’t pay off later. I haven’t been this confused since I watched Kevin Costner overact in Mr. Brooks.

The Minister wakes up in a hospital and realizes that the bank is about to close and all this wackiness of the day is going to be all for not, so he does his best Ferris Bueller impression as he races to the bank:

He gets to the bank as it’s closing…but it’s too late…it has actually been three days–not one– since their last meeting. He finds out the church has been sold to none other than the White gang. He goes to the entrance of the church to see for himself and stares crazily as the White gang is doing some redecorating. Who wants to bet me that the church won’t be burned to the ground by Father Flanagan here? With that the show ends.

So basically, this week’s show was the day in the life of the minister. It was pretty good though in my opinion. To get back to my original metaphor at the start of the night, I think I will give this show another date. I can feel the potential here. Hopefully this potential will eventually pay off to something. It feels like we’re building up to something big on this show, but right now there are a lot of moving parts and completely isolated plots happening that will hopefully intersect at some point into something grand. If not…well, Leftovers, it’s you, not me…I think we should see other people…I’m just not ready for anything serious right now, but let’s be friends for sure 😉

What did you guys think of the show tonight?