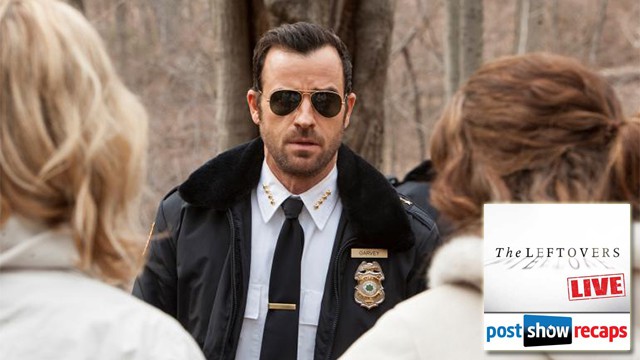 So here we are again with The Leftovers. Once more I’m going to keep with my metaphor of The Leftovers being a girl I just started dating and not knowing if she is long term material or not. We have been treading water up to this point and now it’s time to take this relationship to the next level or decide to just be friends…aka never speak to each other again. We want The Leftovers to work because she has a nice body and sexy eyes, but we’re mature now and looks can only take us so far. We need somebody with substance; we need the full package. The Leftovers are you that person?

Waiting for the show to start with some Gatorade and dealing with this hot Portland, Oregon July heat. We get some clips from True Blood, which seems like it has been on TV since 2002 and runs non-stop. I never got into that show; it always seemed like a CW show masquerading as an HBO quality show. We then get the “Previously on The Leftovers” portion to start us off. I keep waiting to hear the voice of that guy who did the “Previously on Lost” before every episode.  He had a distinct voice, and this show already kind of feels like a non-medicated severely depressed cousin of Lost, so it would be a good fit.

We start this episode with the pleasantly plump older woman with the glasses white gang member that has been in every episode so far, who for whatever reason seems the most unlikable out of the whole gang, accepting some mission. The show’s first line this week… “F**k you, you f**king c**ts.” That’s one way to go. This show has really put smoking back on the map. I wonder if they’re really smoking those candy cigarettes that the ice cream man used to sell us when we were kids? Remember those days? How f’d up was that…that we used to get candy cigarettes to be cool and that our parents let us? I miss that world sometimes… Anyhoo, our plump white gang member watches some old guy eat shit on the sidewalk and walks right over him…This lady really is terrifying.

Just when I wanted to hate her, she gets dragged off at the gas station into the woods, tied up and stoned to death. Is it possible to jinx a character from a TV show that was probably filmed seven months ago? It sure feels like I just led that character straight to a horrific death. They really wanted to hammer home how horrible this stoning was because it was really graphic and hard to watch.

The pot alarm goes off in the white house and everyone gets woken up and piles into the party vans. They go to the gas station and then they search the woods trying to find their fallen comrade. They get joined by America’s favorite dog hunter, the guy whom we all thought was a ghost but really is a real, bald guy. We don’t have a name for him yet so I’m just going to call him Dog the Bounty Hunter until we get an official name, capisce?

We get our first glimpse of the sheriff this episode, waking up with his typical TV “I’m depressed but my beard has the perfect stubble growth” look and his awful back tat.  I feel like there’s a countdown clock of when we’re going to get the episode that gives us the backstory of that tat and quite frankly I’m not looking forward to that. After fiddling with his alarm that he thinks was messed with, he gets the news from the de facto leader of the white gang that there’s been a murder.

Liv Tyler and Laurie smoke and talk, and the sheriff’s wife looks disgusted with Liv… with every line that she says. In fact, she gets so disgusted with Liv Tyler’s acting that she has a panic attack or stroke or something. To be continued…

Back at the crime scene in the woods, the sheriff catches up with his BFF Dog the Bounty Hunter who was a witness to the murder and wants to leave so he can go to his ballroom dancing lessons..I would bet that Damon Lindelof originally wrote this part for Terry O’Quinn, the guy who played Locke in Lost, but he turned them down so they went to this guy.

We rejoin Laurie after her “Liv Tyler is a horrible actress” attack and the doctor, after treating Bruce Wills and Ben Affleck for the same condition, understands just how to treat this…with powerful drugs.

Sheriff Kevin wants a citywide curfew and the mayor lady is on board if Sheriff Kevin will be there at the press conference to explain why. It may just be me, but the sheriff doesn’t seem like the best person to instill calm and good vibes into a community.

Laurie and the leader of the white gang who looks like Mags from Justified get a hotel room for the night, probably to get away from Liv Tyler for at least twenty-four hours. Do they get the money for that through some slush fund in the white house? Where do they get their money from? Maybe the cigarettes companies pay them to promote their products?

The sheriff gets awakened by some dude who looks like Jason Sudeikis’ chubby older brother. We will probably find out later that he’s a part of the murder; he had that look.

Laurie wakes up and joins her compadre for the continental breakfast at the hotel. Mags (Again until I have an official name, I will be calling her Mags) begins to talk for the first time in this series. She tells Laurie that she can talk, that Liv is nowhere to be found, and it’s safe, but Laurie seems skeptical about the whole thing.

Pretty funny sequence where Sheriff Kevin goes to get his dry cleaning which is missing and eventually will be sold on the black market, then he runs into Nora, whom I’m guessing is contractually obligated to appear in every episode… so they shoe-horned her in here with no real purpose other than some quick, witty banter to set up that at some point she and the sheriff will be getting down…

The sheriff then goes back to his office to interrogate Mapleton’s favorite roulette player, the priest. The priest creepily asks if he can see the body of the victim, but luckily the sheriff says no emphatically.

The sheriff gives his curfew speech to the city and it doesn’t exactly have a “Yes, we can” vibe. It gets taken to a vote for the council and it unanimously fails. The only way that vote was passing was if Jimmy Chitwood would have shown up willing to play basketball for Mapleton.

After the debacle of the first meeting, Sheriff Kevin decides to try again, this time with the white gang, giving them all rape whistles and telling them to back off from their stalking and other creepy activities. Everybody looks sad. He then approaches Liv Tyler asking about his wife, and Liv acts a little too aggressive and douchie when he asks her about Laurie. Everybody loses.

Moving on to our next crazy one-on-one talk, we get the priest telling some story about silence to the sheriff who looks flabbergasted. I guess the priest is trying to convey that he can actually help the white gang. They go to see the body and it turns out the body has been shipped off to the FBI and Sheriff Kevin is slightly perturbed by this. He goes back home, has an alarm malfunction, and finally talks to the FBI agent he has been trying to get a hold of. The FBI agent gives the sheriff the opportunity to wipe out the white gang completely but the sheriff is not ready to do that quite yet. Instead, he gets drunk and confronts the dry cleaning guy and gets his shirts back. This drunk thing is really working for him; he should do this more in his day to day activities.

Liv Tyler greets Laurie and Mags in her new white gear; installed are shoulder pads. She begins telling them that she is ready to completely be one of them, but before Laurie and Mags can puke in frustration, they get interrupted by the priest outside offering to help them. This leads to Laurie blowing her whistle in what may be the most obnoxious whistle blowing in the history of television. She had a little too much of an “I’m tough” look going on for my liking. If I were the priest I would have just waited her out, waited for her to lose her breathe, and then continued.

Sheriff Kevin returns home; he tells Jill it’s time for mommy and daddy to get a divorce. He sheds some tears and we all move on. I hope he cleans her out in court, takes her for all her money, and white clothes.

We go the FBI headquarters for dead white gang members from across the country. I’m guessing our Mapleton victim gets incinerated. Does this have any meaning for us moving forward? The end….

Grrrrrrr….I don’t know what to think. I feel like I’m right where I was before this episode, where I like some things about this show and don’t care for other things. I don’t know if we’re supposed to sympathize or have empathy for the white gang because right now I hate every member of their gang. If the writers want us to have some positive feelings about them then they are failing miserably, but if they want us to hate them then it’s working in spades.

The sheriff is the only character that I can remotely understand or connect with in this show, and granted, I’m a thirty-four year old male, but I honestly can’t think of anyone else who is remotely likable on this show and that feels like it is and will be a problem going forward for this show. At times this show feels as if you’re watching all the scenes that were or should have been edited out, and the real show is off somewhere else…like there is a good show somewhere, but HBO keeps airing the deleted scenes instead of the actual show. I really do want to like this show, but for the love of god, will they please pull it together and give us something more than an extended ad for an anti-depression medication that airs during the commercial breaks on Survivor? “Where is this show going?” is the only question that keeps me somewhat interested. I want to know if there is a big picture here that is going to blow our minds somehow.

Let me know what you think of this show because for me, at this moment, I don’t see myself dating The Leftovers long term…I think we may be better off as friends.