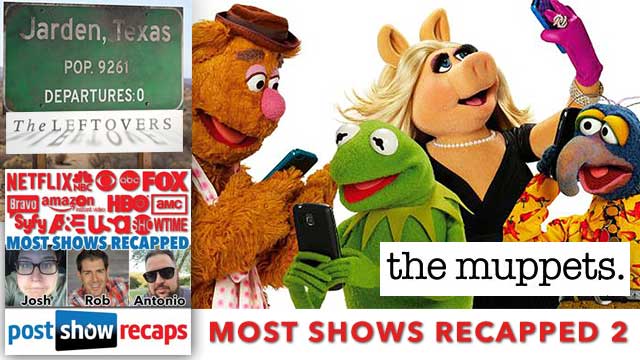 It’s time to play the music! It’s time to light the lights! It’s time for sudden departures on the second episode of MOST SHOWS RECAPPED tonight on POST SHOW RECAPS, covering two shows for the price of one!

Rob Cesternino (@robcesternino), Josh Wigler (@roundhoward) and Antonio Mazzaro (@acmazzaro) are joined by special guest Jessica Liese (@HaymakerHattie) to talk about THE MUPPETS, the new ABC series starring Kermit, Miss Piggy and the gang in a mockumentary style sitcom, ala THE OFFICE and THE LARRY SANDERS SHOW. The panel is mixed on the results so far after two episodes, and are forced to determine the quality of sushi they would associate with the new MUPPETS.

Once the Muppets chat wraps, Josh and Antonio remind everyone that they’re packing up and moving to Miracle, Texas for the second season of HBO’s THE LEFTOVERS, the über depressing drama from LOST creator Damon Lindelof, set in a world where two percent of the population disappeared without a trace. Early reviews of the new season are positive, and Josh and Antonio are excited to start podcasting about it weekly all over again. Expect their LEFTOVERS podcasts on Monday afternoons.

Let us know your take on the two shows in the comments below, using the feedback form, or by hitting us up on Twitter!