LIVE at 10:15 pm ET / 7:15 pm PT on Sunday, February 9th, Rob Cesternino and Josh Wigler get together to recap Season 4, Episode 9 of AMC’s The Walking Dead: After. Join us LIVE to discuss everything that happened in the new episode and ask us your questions to answer during the show. We’ll break down what is up next for Rick and all of the Survivors of the Zombie Apocalypse. On this episode Rob and Josh discuss: 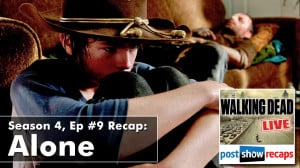 You won’t be ALONE, when you join us for our Walking Dead Post Show Recap